You are at:Home»Reviews»20+ Hyperledger Interview Questions And Answers

Are you preparing for your Hyperledger interview? Well, you are not alone. Hyperledger has grown in its demand from the last couple of years. Its demand is coupled with the blockchain demand for talent.

Big companies including Facebook, Twitter, Microsoft, and others know the importance of talent, and when it comes to new technologies such as Blockchain.

Right now, one of the biggest hurdles for the industries is to work towards a standard for the blockchain.

Hyperledger, an umbrella project run by The Linux Foundation aims to do just that. It is an open-source blockchain technology that aims to advance blockchain adoption through global collaboration.

It has been adopted in many real-world projects and there are benefits for organizations to stick to an ecosystem that is evolving at a rapid pace. Currently, there are hundreds of members that are currently part of the Hyperledger ecosystem including the likes of IBM, AirBus, Accenture, and others. 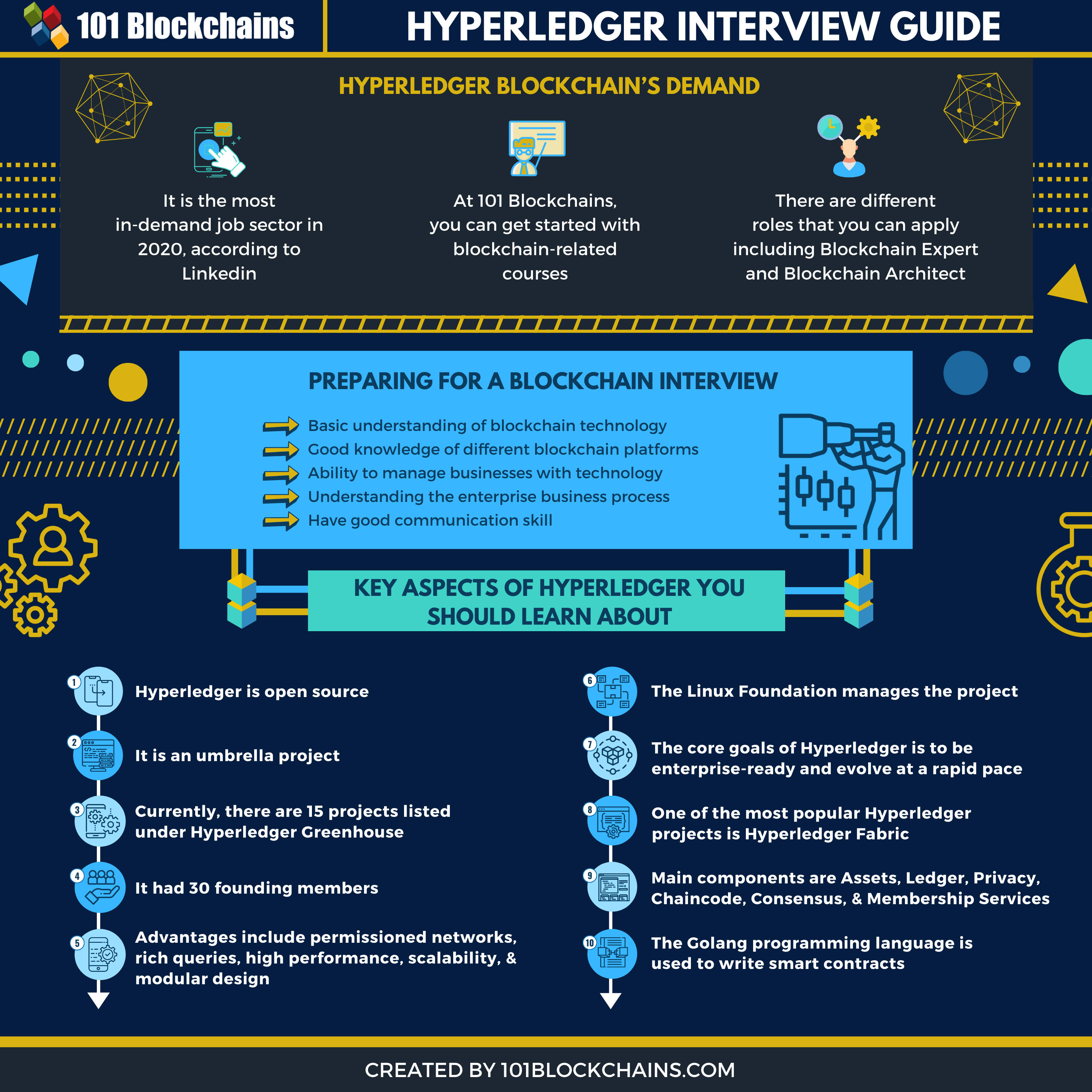 How To Prepare For The Blockchain Interview

Before we go through the questions, we need to learn how to prepare for the interview. As a learner, you should always start from the fundamentals and become strong at it. By doing so, you are opening yourself up to more advanced concepts.

Apart from that, you should get cross-discipline broad skills, a basic understanding of different blockchain platforms, the ability to manage the business with technology, understanding the enterprise business process and much more!

We have covered all of the points in our How To Prepare For A Blockchain Interview Topic. These points also apply to you for Hyperledger Interview as it is based on blockchain. All you need to do is use the points according to a company that is trying to hire you for Hyperledger. Anyway, the interview should help and that’s why you should give it a read before proceeding below.

Are you looking for interview questions for blockchain? Then, Top 50 Blockchain Interview Questions And Answers 2019 is what you should check!

There is no doubt that blockchain is in demand. After all, it is changing how our industries work and function. It’s the ability to solve problems that were thought to be impossible earlier is what makes it so amazing!

Moreover, you will find a lot of certification programs around blockchain.

101 Blockchains understands the market demand and also offers its own plethora of blockchain-related courses. Check out the 101 Blockchains academy to know more!

Linux’s Foundation’s Hyperledger is a great attempt to provide tools to use blockchain effectively. In fact, many top schools including the likes of MIT and Berkey are already engaging their students by providing cryptocurrency and blockchain classes.

Overall, we can see a huge demand in both blockchain and Hyperledger in the general space. CNBC also reports that blockchain is the most-demand job skills according to Linkedin in 2020

Overall, it is easy to say that you have chosen the right path if you are trying to get into the industry.

As you can see there are tons of demands for the blockchain and Hyperledger. It is easy to say that you will get a job if you have the skills and the aptitude to clear the interview. Most of the time, it is the inability of the candidate to know the job requirements before trying to get it.

Blockchain Specialist: A blockchain specialist is the one guy who wants to have the skills to develop blockchain-based solutions. He has skills such as technical conscience, programming language expert, design and develops blockchain solution, configures blockchain infrastructure and so on!

Blockchain Architect: A blockchain architect has a different role to play altogether. He is the person who designs the blockchain solution for an enterprise or an organization. He works closely with R&D teams to make it happen! The key skills a blockchain architect should have include blockchain fundamentals, leadership skills, data structure knowledge, cryptocurrency proficient and so on!

We have already covered the blockchain architect article. If you want to learn, then check it out here: How To Become A Blockchain Architect. Understanding the difference can help you present your skills accordingly and adjust it in your Hyperledger interview.

35+ Hyperledger Interview Questions You Should Know About

Q: What is Hyperledger?

A: Hyperledger is an umbrella open source collaboration project managed by The Linux Foundation. It offers a Hyperledger Greenhouse ecosystem, which consists of many projects ranging from tools, frameworks, and libraries.

As it is open-source, it is actively developed, and hundreds of developers all across the world work together to improve it. It was introduced in Feb 2016 in the beautiful city of San Francisco, California. At that moment, it has 30 founding members, including IBM, VMWare, SWIFT, R3, and others.

Q: What are the core goals of Hyperledger?

A: The core goals of Hyperledger are as below.

Q: What is Hyperledger Fabric?

A: Hyperledger Fabric is a popular Hyperledger project. It is used for developing solutions and applications with a modular architecture. Some of its key features include plug-and-play membership, consensus, and other features. This gives the industry a lot of options to work with blockchain technology and can be used in a plethora of industry use-cases. Also, its focus is to bring more scalability without the need to sacrifice privacy.

More resources to learn from:

Q: What are the main components of the Hyperledger Fabric Model? Describe them shortly.

Note: This is an important question in the Hyperledger interview.

Q: What projects are listed among the Hyperledger umbrella?

A: Currently, there are 15 projects under the Hyperledger Greenhouse. They are as below.

Note: In the Hyperledger interview, the interviewer expects you to know all the projects. However, if you are not able to answer all, then do not worry as the interviewer will focus on your technical knowledge as well.

Q: What is the Technical Steering Committee(TSC)?

Q: What are the three stages a Hyperledger project goes through?

A: The Hyperledger project cycle can consist of five possible states

Note: Telling the interview about the five possible states in the Hyperledger Interview implies that you know how the projects are maintained.

Q: Tell us the advantage of Hyperledger Fabric?

A: There are many benefits of Hyperledger Fabric in an enterprise environment.

Q: What are the components of Hyperledger Fabric?

A: It has two components, including State data and transaction log.

Q: What is Hyperledger Explorer?

Hyperledger Explorer is a part of the Hyperledger Umbrella projects. It lets developers create a web application to view/query blocks, associated data, and transactions in Hyperledger. It also enables you to check transaction families and any other information that is available in the ledger.

Q: What is Hyperledger Aries?

It is best suited for peer-to-peer interactions in a blockchain environment.

Q: What is Hyperledger Avalon?

Hyperledger Avalon is a tool that is an independent ledger implementation using the Trusted Compute Specifications. The Enterprise Ethereum Alliance publishes it. With it, the blockchain processing can be securely moved to the dedicated computing resources from the main chain.

Q. What is Hyperledger Besu?

A: Hyperledger Besu is an enterprise-ready Ethereum client. It can be both private and publicly permissioned. It comes with many consensus algorithm support, including PoA, PoW, and others.

Q: What is Hyperleder Burrow?

A: Hyperledger Burrow is a distributed ledger software that focuses on speed, developer ergonomics, and simplicity. It can also be defined as a complete single-binary blockchain distribution. It comes with the support for both WASM and EVM based smart contracts. It also has permissioning and governance in-built and can also do on-chain proposal transactions.

Q: What is Hyperledger Caliper?

Hyperledger Caliper is a tool within the Hyperledger ecosystem. With it, you can benchmark blockchain, its performance using the predefined use-cases. It generates reports and also gives the user references to other blockchain solutions, including Hyperledger Sawtooth, Ethereum, Hyperledger Besu, Hyperledger Burrow, FISCO BCOS, Hyperledger Fabric, and Hyperledger Iroha.

Q. What is Hyperledger Cello?

A: It is another tool in the Hyperledger Greenhouse. It offers a blockchain operational dashboard. It improves the managing, creating, and using blockchains. It also let’s enterprise create Blockchain as a Service. Lastly, it can be used as an operational console, letting you manage blockchain efficiently. It can run on different infrastructures, including virtual machines, bare metal, and other container platforms.

Q: What is Hyperledger Grid?

Q: Hyperledger Grid is a supply-chain-centric reference implementation solution. It is domain-specific and hence will work with a supply chain-based business. With it, businesses can reference the implementation of data models, data types, smart contracts, and so on! It also follows the open standards and industry best practices.

Q: What is Hyperledger Sawtooth?

A: Sawtooth is a distributed ledger software that offers a modular and flexible architecture, just like Fabric. It enables enterprises to distinguish the core system from its application domain. This means that smart contracts can be configured without the need to know the core system design. It also supports different consensus algorithms, including Proof of Elapsed time(PoET) and Practical Byzantine Fault Tolerance(PBFT).

Q: What is Hyperledger Indy?

Q. What is Hyperledger Iroha?

A: Hyperledger Iroha is yet another distributed ledger software that works well with IoT and infrastructural projects. It can easily be integrated with them, and it is also simple to use. Its key features include modular, simple construction, C++ design, and other fault-tolerant consensus algorithms.

Q: What is Hyperledger Quilt?

A: Hyperledger Quilt is Interledger protocol Java implementation. It enables crypto and fiat payments across any payment networks.

Q: What is Hyperledger Transact?

A: Hyperledger Transact is a library which reduces the distributed ledger software writing development. It provides the ability also to create a standard interface that let’s execute smart contracts.

Q: Tell us the difference between Ethereum and Hyperledger?

Read more about: Ethereum vs Hyperledger: Which One Is Ideal For Smart Contracts And Privacy?

A: YAML file is a data-serialization human-readable language. It is used in the Hyperledger project. It is used to configure different aspects of the project.

Q: In which language Chaincode is written in?

A: Chaincode is written in using multiple languages, including Java and GO.

Q: What is Golang?

A: Golangis a programming language that is used in the Hyperledger Fabric project. It is used to write smart contracts, and also the chain code is written using it.

Q. What is the Genesis Block?

Q: What are the Nodes in Hyperledger Fabric?

A: The communication entries in Hyperledger are known as nodes.

Q. What is a channel in Hyperledger Fabric?

A: The subnet of a Hyperledger network is known as the channel. There can be as many channels as possible in the blockchain network.

Q. Tell us about the different types of Nodes in Hyperledger Fabric?

A: There are three types of nodes in Hyperledger Fabric.

Each node has its own functionality. For instance, the peer needs to commit the transaction that is initiated by the client node. The guarantee of the transaction completion is taken care of by the order node.

A: They are the same in reality.

Q: What is the consensus mechanism?

A: Consensus mechanism is used to verify the transactions and other activities within the blockchain network. There are many popular consensus mechanisms, including Proof-of-Work(PoW) and Proof-of-Stake(PoS). Hyperledger utilizes the PBFT model(Practical Byzantine Fault Tolerance).

Q. What does BaaS mean?

A: BaaS stands for Blockchain as a Service — which is provided by top-tier companies including Microsoft, Google, etc. to provide Blockchain as a complete service. This way, the enterprise doesn’t have to build its own blockchain solution and can host their blockchain application on the serviceable Blockchain.

This leads us to the end of the Hyperledger interview and questions. So, what do you think about the interview questions for Hyperledger? Comment below and let us know.