Are you looking to learn about peer to peer network? If you do, then you have come to the right place as we are going to go into an in-depth guide on the topic and understand its implications in different popular technologies, including blockchain.

Without wasting any more time, let’s get started with the peer to peer network.

The network, once formed, can be used to share files and store them as well. In any of the peer-to-peer networks, all the nodes generally have equal power and can use the same tasks.

The definition of P2P network changes depending on which sector it is used. In the case of the financial sector or technology, a P2P network can mean a distributed network where the peers can exchange digital assets or cryptocurrencies.

This enables the peers, i.e., sellers and buyers to buy or sell without the need to go through any intermediaries.

The removal of intermediaries is the key here. Also, different P2P environments or platforms connect the peers without interfering with the process itself.

All of these happen because of P2P architecture. Apart from the financial sector, there are various use-cases of P2P.

The P2P concept is also not new as its first use-case dates back to the 1990s where it was first used in first file-sharing programs. 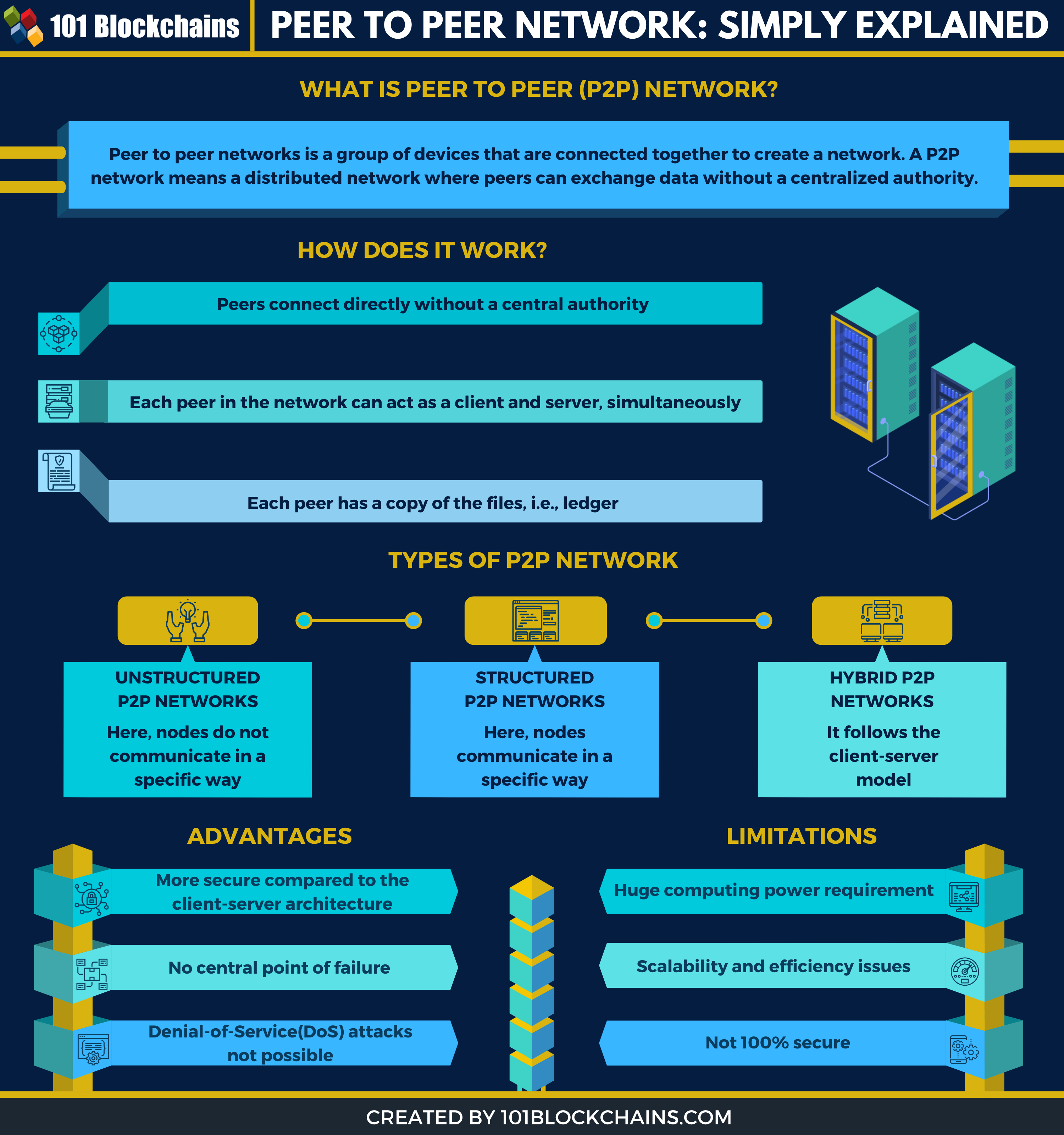 However, now P2P networks are everywhere as we now have more than 2000+ cryptocurrencies that take advantage of these networks.

The P2P networks are also used in distributed computing applications such as streaming platforms, web search engines, online marketplaces, and so on. It is also part of the InterPlanetary File System(IPFS) web protocol.

Blockchain technology has also been the front-runner when it comes to using P2P networks. As you might know, blockchain is a peer to peer network where peers can communicate and do transactions without the need for centralized authority.

Let’s dive more into the topic by learning how P2P works.

Peer to peer: How does it work?

To get a better understanding of peer to peer networks, we need to learn how it works.

So, how does peer to peer work?

In a P2P network, the users are themselves responsible for maintaining the distributed network. As it is a peer to peer network, there is no need for a central authority or administrator. This means that each node needs to act as both client and server to other nodes on the server. Each of the nodes has a copy of the file. By doing so, each node acts as a server and needs to either download files from other nodes or upload them to other nodes.

The nodes use hard drives to store the shared files. When it comes to software, they use applications that can be used for sharing of data or helping other devices to process queries for finding or downloading files. In any circumstance, the peers need to act as a source for any given file.

So, to make it simpler, we can think of a node to have two distinct functions. The first function is to act as a client when downloading files from other nodes on the network.

Again, the node can act as a server when it is required to serve files to other nodes. This sharing and receiving aspect can be done by a node simultaneously, which makes the P2P network so efficient and fast. The network tends to become more efficient as the network grows.

Also, unlike traditional models, the P2P distributed architecture is also secure and can fend off cyber attacks in a much better way. This is because of the fact that there is no central point of failure in a P2P network.

Types of the peer to peer network

There are three different types of P2P networks. Let’s go through them below.

In the unstructured P2P networks, the nodes are not organized in any specific way. This means that the communication between the nodes is random in nature. That’s why the unstructured P2P systems are best suited for activities that require a lot of activity. For instance, a social platform powered by P2P can utilize it as people can choose to leave or join the network frequently.

However, there is a drawback to the unstructured P2P networks as it requires a lot of CPU and memory power to run properly. The hardware should be able to power the highest number of transactions in the network, which means all the nodes interact with each other at any given time.

There is no doubt that structured P2P networks are more efficient. However, they also have some sort of centralization as they are using organized architecture. It also means that they require higher maintenance and setup costs. Lastly, it is robust when compared to the unstructured P2P network.

Hybrid P2P networks are a combination of the peer to peer architecture and client-server model. This is useful for networks where they need a central server with P2P features.

Hybrid P2P networks are more efficient than the structured and unstructured P2P networks. Other key advantages include a better approach, significant efficiency, and more!

Before we move on to our next section, we need to understand that not all P2P networks are decentralized. This is possible even when you know that P2P architecture is inherently distributed.

Role of P2P in Blockchains

Peer to peer network has always been at the core of the newly released technology, the Bitcoin. In fact, Satoshi Nakamoto itself used the term “Peer-to-Peer” in his paper, where it defined Bitcoin as a P2P Electronic Cash System.

Bitcoin introduced a key concept blockchain where a distributed ledger called blockchain is managed by the P2P. Clearly, there is a connection between P2P architecture and how blockchain technology works.

You can easily say that this is how cryptocurrencies work and make themselves available almost everywhere around the world within an instant. The fact that there is no centralized server requirement to carry out the operation makes P2P architecture and blockchain technology so amazing and alike!

When it comes to blockchains, it is important to understand the fact that there is no need for a central authority to record or process transactions.

The same is true for the Bitcoin network, where there is no central authority. Everything that is done on the network is stored in a digital ledger where all public activities are recorded.

If someone tries to play with the data, and try to modify it, then it will result in a malicious activity in which the network is capable of stopping. It will discard any inaccurate data.

One more way the P2P network has influence in blockchains is how nodes participate in the network activities. Not all nodes have the same role. There are nodes with different roles.

For example, there are full nodes that are capable of verifying transactions using the consensus algorithm set by the network. They help make the network more secure. The full nodes are also responsible for having a complete and updated copy of blockchain’s ledger.

Advantages of P2P architecture in Blockchains

There is no doubt that P2P architecture used in blockchains brings a lot of benefits. For example, the architecture is more secure compared to client-server. For instance, by having no central point of failure and having a large number of nodes distributed across the network, Denial-of-Service(DoS) attacks are not possible.

Another benefit is data immutability, where the data once is written cannot be altered. The bigger the network, the less chance it can be altered. To alter the data, the majority of the nodes need to be controlled by one entity to carry out a 51% attack.

Blockchains with the use of P2P architecture are now capable of running independently without any censorship of central authority. In comparison, the banks require complete control over your information, and they can also restrict you from doing a transaction if they want to.

Limitation of P2P networks on Blockchains

P2P’s involvement in blockchain also comes with limitations. One of the most significant disadvantages is the requirement of computing power. This is because there is no central server, and each node acts as both client and server. There is no doubt that by using this approach, there is improved security and efficiency. Still, it comes with drawbacks such as lack of widespread adoption and scalability.

The global community is trying to solve the problem with the help of more intricate solutions such as the Lightning network, which runs on top of the bitcoin network and takes care of the transaction verification.

There is one more limitation that we want to discuss which includes the hard fork events. Even though blockchains are secure, they are not 100% secure. This means that it can be hacked and anyone can modify it. The hard fork event also means that anyone can take a copy of the data and modify it according to their requirement — creating a new chain of parallel networks.

Peer to peer architecture is here to stay. After all, it empowers one of the most amazing technologies out there including blockchain. It can also be used in multiple ways with different use cases. Right now, it is mostly used in cryptocurrencies and blockchain solutions. In conjunction with blockchain, it offers better security, immutability, decentralization, and freedom.

So, what do you think about peer to peer networks and their role in blockchain technology? Comment below and let us know.