The blockchain is the next generation technology that is completely revolutionizing every aspect of our lives. Despite a lot of online controversy and debate, the role of blockchain in our growth just cannot be denied. It is here to stay, and many industry experts think the same.

If you are a newbie, who is looking for a blockchain cheat sheet, then you have come to the right place. Today, we will be going through 15+ blockchain questions and answer that everyone should know about.

The blockchain is slowly transforming the social systems around us. It is providing a key feature that other technology failed to provide until now, i.e., decentralization. The decentralization feature is also changing our finance sector and enabling it to impact almost every vertical out there.

In short, advantages of blockchain are more than disadvantages. So, without any delay, let’s get started with the blockchain things that everybody should know about. You can also download the blockchain cheat sheet pdf to keep it with yourself and learn on the go.

15+ Blockchain Questions Everybody Should Know About 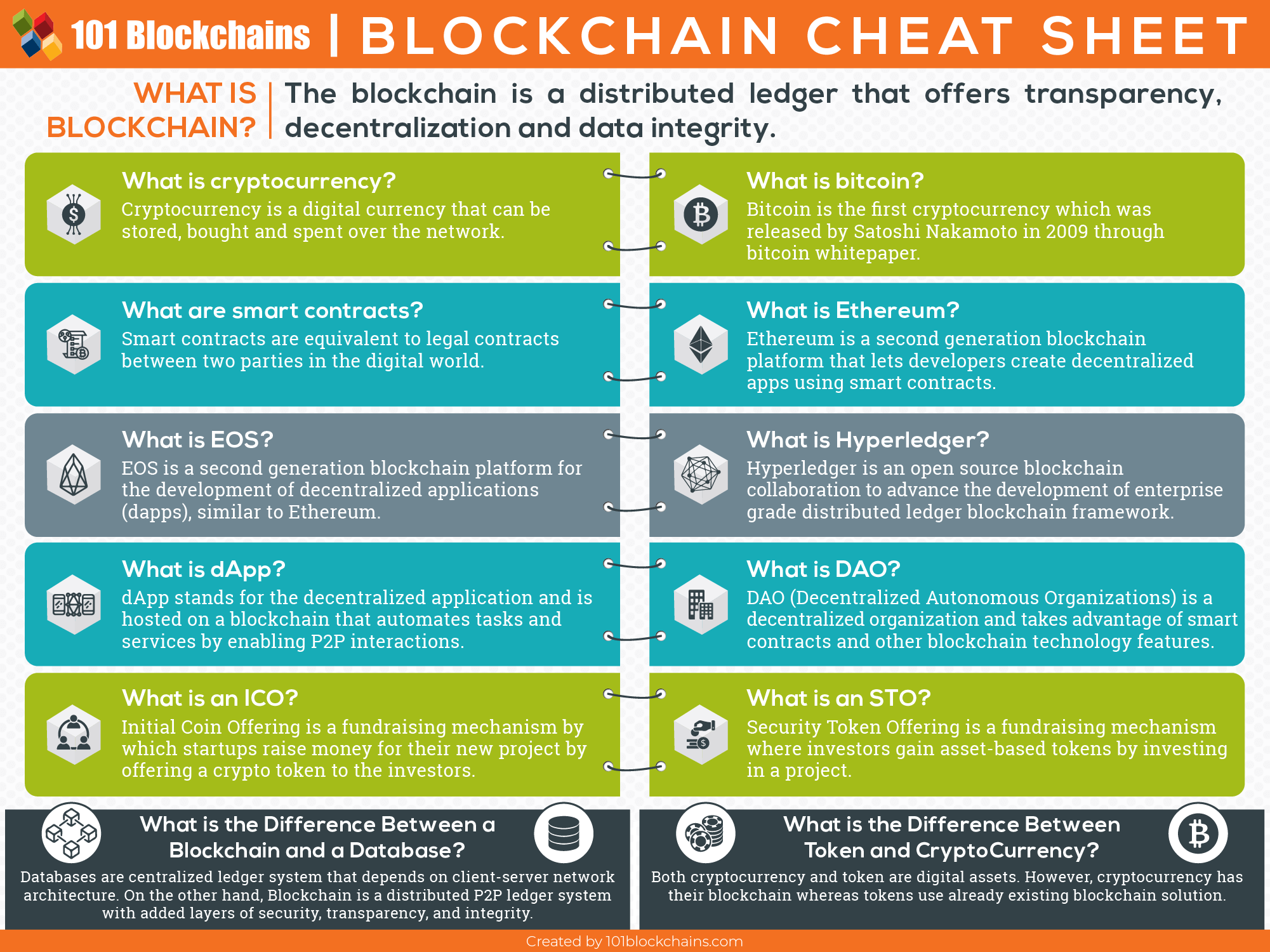 We can think blockchain as a decentralized database. But, it is more than that. The blockchain is a decentralized ledger. In a blockchain, data can be stored, recorded, traced and worked upon without the need of any centralized authority. Blockchain consists of blocks which in turn consists of transactions assigned to it. Each of the transactions is encrypted in nature which in turn protects the identity of the participants. This simple idea has tons of use cases and can be implemented in almost every vertical out there including finance, government, transport and so on.

Want to know more about blockchain technology? Check out our this Ultimate Blockchain Technology Guide.

Now, that we learned about blockchain, we need to answer our next question, “Does blockchain matter?” If yes, why does it matter?

The blockchain is worth every attention now. It is a revolutionary technology that is providing an alternative to the traditional money controlled and issued by the government. The digital currency that blockchain offers such as bitcoin is extremely popular and can be used to make transactions faster, more secure and private. There are also many startups that are working towards making blockchain more advanced regarding features and functionality. You can also use digital currencies to buy day-to-day items.

It has already impacted the industry as it is enabling businesses to become future ready and ensure that they grow in the right direction. Moreover, blockchain is an ideal technology to be used for identity system where individuals driver license, national ID and other identity metrics can be stored and accessed anonymously.

Cryptocurrency is best known as the digital currency that can be stored, bought and utilized over the blockchain or distributed network. It works similar to digital cash with no real-world existence. The value of the cryptocurrency depends on market conditions. One of the most popular cryptocurrency is bitcoin. It is also the first digital coin to came into existence in 2009. Cryptocurrency can be used to trade without any centralized authority. It also makes transactions cheaper and faster. Other key examples of cryptocurrency include Ethereum, NEO, EOS, and so on.

Bitcoin is the first digital currency that used blockchain technology. It came into existence with the release of the bitcoin whitepaper in 2009 by Satoshi Nakamoto. From there, it has achieved a lot of popularity. Experts are also working on it to add new feature including the latest lightning network which will make transactions faster on the bitcoin network. In terms of price, it saw all-time high of $19k in 2018 end. At the time of writing, it is currently hovering around $6K per bitcoin.

Bitcoin uses Proof-of-Work(PoW) consensus algorithm to reach consensus in the network. It is a way to approve transactions and ensure that they are valid. Even though bitcoin is so popular, they are not liked by banks as it gives decentralization to the normal people. However, banks do love blockchain.

5. What are smart contracts?

Smart contracts are equivalent to a legal contract in the digital world. It is written in code and is signed beforehand by two parties using it to perform a task such as a transaction. Smart contracts can be used to exchange assets including properties, automate ownership and copyright and also automate an organization(DAO). Smart contracts work without any centralized authority and hence take advantage of it to automate a lot of tasks. The contract is held between two anonymous parties where events are triggered, and the code is executed.

Ethereum is a blockchain technology which is open source and lets developers utilize technology to create decentralize applications which are also known as dApps. The technical difference between bitcoin and Ethereum are significant. Ethereum lets developers host new apps on its blockchain with the help of smart contracts and dApps. Automation is also a big part of the Ethereum network. Ethereum solves a lot of problems that Bitcoin had. Vitalik Buterin developed it as he is trying to solve the problem from a different perspective.  Ethereum utilizes Proof-of-Work(PoW) consensus algorithm, however, it does plan to move to Proof-of-Stake(PoS) in the future. When we compare Ethereum with Bitcoin, it falls under the second generation of blockchains. This means that it utilizes smart contracts to automate a lot of tasks. Developers can also develop decentralized dApps which aim to solve more significant problems or facilitate a service over the Ethereum platform.

EOS is a blockchain platform which can be used to build and deploy industrial-scale applications. It works similar to Ethereum in many ways and is developed by Dan Larimer. EOS main motive it to remove transaction fee and provide scalability at the same time. EOS can be used by developers to develop dApps and scale them without worrying about the network bottleneck. EOS uses a decentralized operating system to ensure that the blockchain is scalable and ensure communication between apps are top-notch. Currently, Block.One is in charge of managing EOS development.

We have covered EOS in detail. Check out the post here.

Hyperledger is an open source blockchain collaboration to advance blockchain technologies and facilitate the development of enterprise grade distributed ledger blockchain framework. It is formed across the industry where everyone will work towards making blockchain more accessible and easy to work with. Both tech giants and startups are participating in the ecosystem to ensure that blockchain has an enterprise-grade framework to work with. To ensure that they don’t lose the focus, they will not release any cryptocurrency attached to the project. Currently, four projects are running under HyperLedger including Burrow, Indy, Sawtooth, and Fabric.

You can learn more about Hyperledger as we have covered it in-depth here.

dApp stands for the decentralized app and is hosted on a blockchain platform. They take advantage of the decentralized ledger and run on top of the blockchain network. Developers can use smart contracts to code dApps. This gives dApps the ability to be automated without the need for a human interference. The first blockchain network that brought dApps is Ethereum. It enabled developers to develop dApps with the help of smart contracts. Decentralized apps cannot be controlled by centralized authority. The app might have its own cryptocurrency to facilitate different activities offered by it.

Want to learn more? Check out the dApp beginner guide on 101blockchains.com

DAO stands for decentralized autonomous organizations. DAO is a decentralized organization and takes advantage of smart contracts and other blockchain features. It can run on its own and doesn’t have hierarchical management associated with it. The code is pre-written which process different features and functionalities that DAO has to offer. It is operated with the help of distributed consensus protocols. Ethereum and EOS support DAO and anyone can define a rule and build a DAO that works independently.

11. What is blockchain digital transformation?

ICO stands for Initial Coin Offering. It is a fundraising mechanism by which startups raise money for their new project by offering a crypto token to the investors. It sounds similar to IPO but does have a lot of differences between. ICOs are easy to carry out as they require fewer preparations compared to other investment methods. The U.S Securities and Exchange Commission(SEC) is in charge of determining tokens status.

Want to learn more? Check out a detailed guide on how to launch an ICO.

STO stands for security token offerings. They work differently than ICO where you buy tokens by the method of crowdfunding. In ICO, you don’t buy shares of the company. STO solves this problem by giving you actual financial security which in turn can let you participate in the company’s activities including voting rights. Actual assets back STO and hence require careful planning, unlike ICO. Polymath is a popular platform which enables startups or companies to perform an STO. It has an ST-20 standard for token creation, distribution, and storage.

You may want to read more about security tokens here.

14. What is the future of blockchain?

In the future, we will see a large adoption of digital currency and blockchain. Even government are interested in transforming their services with blockchain. You can read more about what we think about the future of blockchain here.

15. What is the Difference Between a Blockchain and a Database?

16. What is the difference between token and cryptocurrency?

Cryptocurrency is a digital asset which has its own blockchain associated with it. Bitcoin is a good example of cryptocurrency. Token, on the other hand, doesn’t have an exclusive blockchain network for it. A token is built on top of an existing blockchain. Example of a token include Binance(BNB) coin.

So, what do you think about it? Comment below and let us know. We are listening.

Check out the table for quick reference:

Want to keep all of these with yourself? Download the blockchain cheat sheet pdf format and learn about blockchain. You can also share the pdf with your peers and ensure that they are also on the same learning path.

Curious to know more about Blockchain? Enroll now for Blockchain certification and courses.