Blockchain has caught the attention of the different industrial verticals out there. Not only it is changing how a business function, but it also enabling innovation to evolve at a rapid pace. That’s why you will find a lot of companies adopting blockchain. These same companies are also tinkering with blockchain making it more feasible for more mainstream implementation.

To get a better idea, let’s discuss the blockchain business model need.

The need for blockchain business model

Blockchain itself is a new business model. With blockchain, organizations can turn their business into decentralization platform which can alter how their business works. It changes the entities, the flow of transactions, profits and also ensuring that growth is maintained during the change.

From the advent of the bitcoin in 2009, there have been many instances where blockchain failed or at least the blockchain applications failed miserably. It was partially because of how the implementation happened, but it was also because of the flawed business model used by companies.

Blockchain-based business models such as The BitConnect business model was nothing but a Ponzi scheme. There are also other models that take advantage of gullible people out there. We will be ignoring all these kind of scams and will focus solely on legit blockchain business models.

From a technical perspective, we need a blockchain-based business model that improves how businesses work and benefits the end users.

The blockchain based business model should also start focusing on the entrepreneurs rather than just investors. This will make projects focus on utility rather than value in the market. SuchApp is one of those projects that focus on utility by providing a blockchain-powered messaging platform. This means the blockchain business ideas should work at both the macro and micro level, benefitting the internal company employees as well as the end users.

So, how does traditional business model work?

They essentially provide service or goods and earn profit from there. The consumers buy the product or the service at a prescribed rate. The rates are set accordingly and consist of all the wages or other expenses that the business have or might have during the process of providing the service or product. Each business has a different way of handling the business. However, they use a basic centralized model.

The model consists of four main entities. It includes the owners or the shareholders, the organization, the customers and the employees. 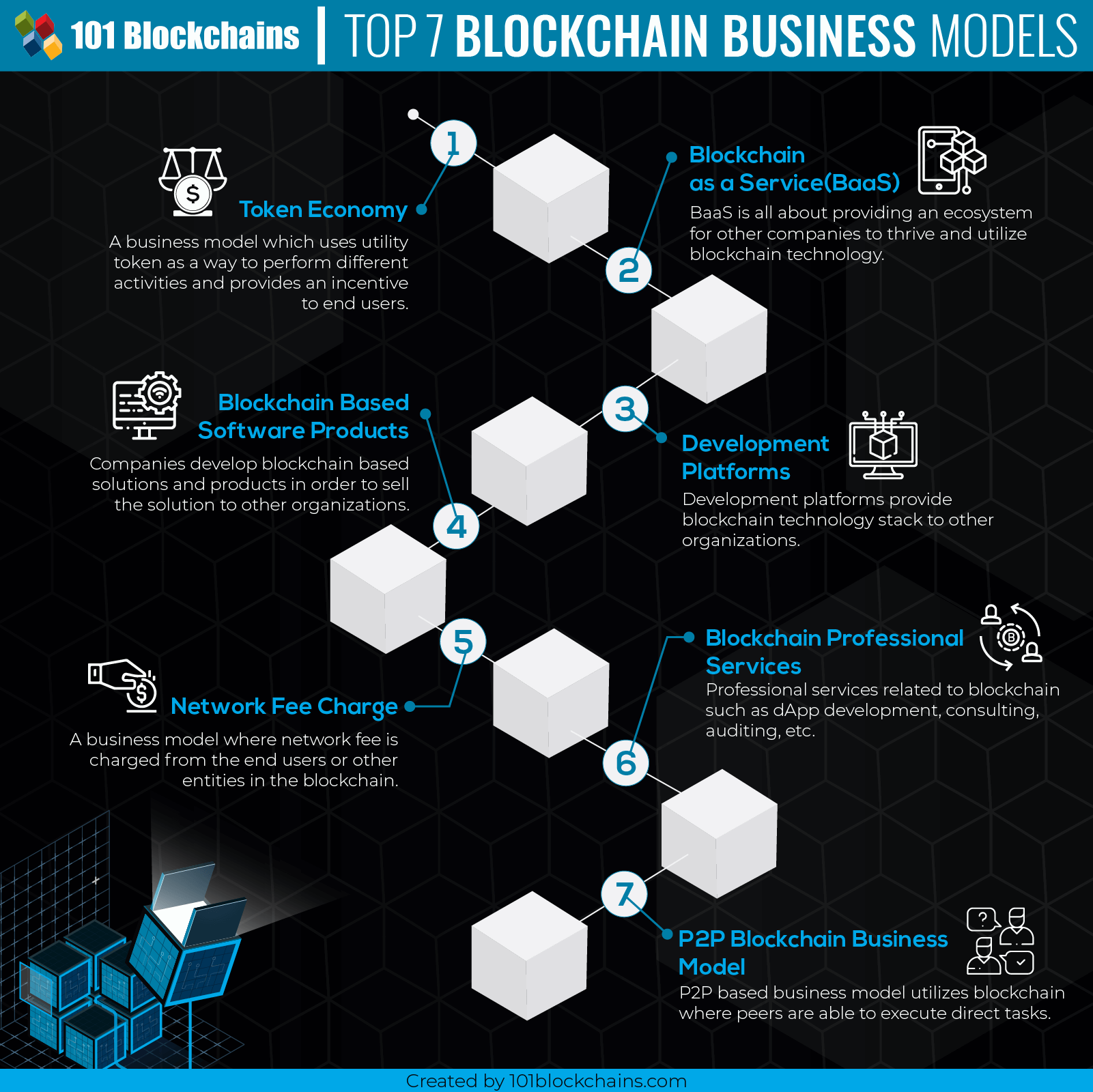 dApps, for example, provides work directly thanks to peer-to-peer transactions. It removes the need for a central authority and any mediators. The ability to create a trusted network is revolutionary to say the last.

So, what entities are not present in the dApps implementation? Firstly, there is no employees or shareholders. Secondly, it is not owned by anyone which makes the business model a lucrative prospect for the users. However, if we go in deep, we may say that users are itself employees or owners, but the fact that their roles and impact is changed drastically in this blockchain model.

But, how the above blockchain based business model make a profit? One way is to use tokens to make a profit. Anyone who helps the blockchain reaches consensus is rewarded with the token which holds value. The value, however, depends on the market condition. Bitcoin, for example, offers miners the chance to make a profit by contribution to the network.

Everything looks great, but what about the organization or business that started the business earn money? They do so by holding some amount of tokens for themselves.

The crowdfunding process gives the early adopters a chance to invest in the business, giving them a better chance to make profits. During the initial ICO process, the price of the crypto assets or the token is low. This way, the developers or the organization gets the necessary funding to make their project a reality.

Now that we have established a basic understanding of traditional, blockchain models and how the business makes money from them, let’s discuss the top blockchain business models out there.

The token utility should have three valuable variables. For example, it should have a proper role, features, and purpose. We recommend you to read a detailed post by William Mougayar on how tokenomics work.

2. Blockchain as a service business model(BaaS)

The end users(in this case business, startups or organization) don’t have to worry about how blockchain works and don’t need to set it up before working on it. BaaS also eradicates the need for hardware, which in turn, enables startups, companies or organizations to focus on their development cycle.

Most of the current blockchain solutions including Bitcoin and Ethereum can be served as service. One such example includes EBaas, Ethereum Blockchain as a Service(EBaaS). The service is managed and provided by Microsoft in collaboration with ConsenSys.

The overall idea of blockchain is still in its native stage. A lot of development and research goes into blockchain as startups are trying to solve problems uniquely. This leads us to our next decentralized business model known as development platforms. Companies, nowadays, are now focusing on developing apps that can result in a blockchain infrastructure. Those apps that can be served using blockchain and cloud to the end user providing rapid development.

Hyperledger is one of those examples which provides tools, frameworks, and guidelines for blockchain development. The key here is rapid development, and they are trying to do just that. Other examples include Tendermint and EthCore.

The concept of blockchain was introduced in 2009. However, now, the need of blockchain is more than ever. This means that the big old players have to adopt blockchain sooner.

The easiest way for cooperates to do so is to buy a blockchain solution and integrate it into their system. This gives rise to the blockchain companies that create a solution and then sell them to bigger companies. Proving blockchain technology to other organizations can be extremely profitable as they are not only going to get a reasonable payment upfront. Moreover, they will also need to provide support after implementation.

The MediaChain blockchain was sold to Spotify is a perfect example of this kind of blockchain business model. It is done to solve the music royalty issues within the music industry. It will bring transparency in the system and reward music creators more for using an already established platform.

Another potential reason for acquiring a blockchain based software solution is the lack of talent in the market. Companies don’t want to go through the process of acquiring the talent. That’s why it is much easier for them to buy a blockchain solution that fits their requirement.

Ethereum users have to pay network fees in the form of GAS.

The last blockchain business model that we are going to discuss is the Blockchain professional services. These services are provided by leading expert development companies to startups or other businesses to get them ready with blockchain. For example, a business would want someone to build their custom blockchain project. In that case, they can hire companies such as Deloitte, IBM or others to complete the project for them.

The key here is to not invest in the hardware, software or team building, but to directly take the services of companies that have perfected the art of blockchain development. You can also find smaller players in this market. Overall, it is a great blockchain business model for talented blockchain professionals who want to use their skills to do business.

There are other forms of blockchain professional services as well. For example, many blockchain powered companies offer blockchain related services such as consulting, developing legal papers or auditing the business.

The P2P business model offers a peer-to-peer powered business. Blockchain technology has always been peer to peer. P2P blockchain enables end users to interact with each other directly. This makes it part of almost all the other blockchain models we have discussed earlier. The P2P business model can be monetized in many ways including tokens, BaaS or transaction fees.

IPFS, an interplanetary filesystem takes advantage of the blockchain business model. Filecoin also utilizes P2P blockchain business model by providing a platform for data storage and sharing. To make it viable, anyone who stores the files for other users will get Filecoin for their contribution. Also, there is a mining software that will let users share their unused storage space.

In short, a blockchain company generally make money using one of the following methods. Let’s discuss them below one by one.

The business model can also be a combination of different ideas and it completely depends on what the business wants to do. There is no hard and fast rule on how a business model should function. The companies or organizations are free to experiment the way they want.

So, what do you think about the top blockchain business models? Comment below and let us know. We are listening.