A Comprehensive Guide to Ripple Blockchain

Ripple cryptocurrency has been gaining regular popularity in the crypt space. Dive in to learn the detailed concepts of Ripple blockchain.

Blockchain is undoubtedly the most hyped technology in recent years. You could take a look at how blockchain has successfully created disruptions in the world of finance with cryptocurrencies. You can find a wide range of cryptocurrencies such as Ethereum, Bitcoin, and Ripple, among many choices. The different cryptocurrencies have unique traits which separate them from each other.

Among the many cryptocurrencies, the Ripple blockchain network has been gaining promising levels of popularity recently. So, everyone is eager to learn about Ripple and how it is related to XRP. The following discussion helps you discover more about the Ripple XRP confusion in an introductory overview of Ripple. 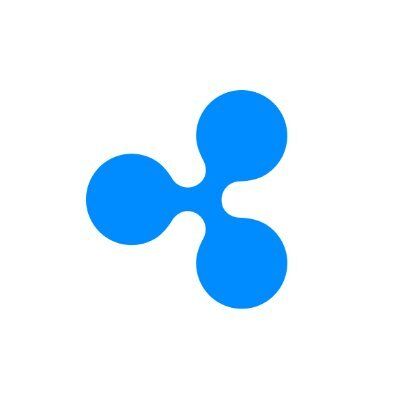 One of the first questions that come to mind in discussions around Ripple in the crypto space is “What is Ripple?” and this question bears quite significant undertones. People immediately associate Ripple with the XRP cryptocurrency. On the contrary, the business, ecosystem, and technology of Ripple are not completely similar to XRP. However, it is also important to note that Ripple blockchain leverages the XRP coin for specific uses in Ripple ecosystem.

Basically, the answer to ‘what is ripple’ would suggest that it is a financial transaction system for cryptocurrency and digital payments. The primary objective of Ripple is to facilitate a system for payment settlement, remittance system, and asset exchange. The native Ripple coin is XRP, and it is the desired pick for different crypto transactions in the Ripple ecosystem. XRP actually works as a settlement layer denomination in between, which serves the role of an intermediary mechanism facilitating trade between two networks or currencies.

Ripple business utilizes XRP Ledger and the XRP crypto in different ways. However, both of them are completely independent of the Ripple ecosystem, thereby shedding some light on the Ripple XRP relationship. As of now, one could clearly infer that Ripple is just like other cryptocurrencies. So, how is Ripple different?

The most important highlight about Ripple cryptocurrency, which separates it from other cryptocurrencies, is also a crucial aspect in an introduction. Over the years, technological advancements have been driving prolific improvements in the speed and flexibility of moving information worldwide. On the contrary, the transfer of money has not achieved the same levels of flexibility.

While cryptocurrencies have introduced many promising improvements in the case of value transfer, there are some prominent setbacks. For example, crypto presents a general impression regarding a lack of compatibility with conventional financial systems. The Ripple blockchain aims to resolve these setbacks and smoothen money transfer while making the process faster and easier.

The history of Ripple cryptocurrency could also offer some vital insights in an introductory overview on the innovative platform. Initially, the Ripple network started off as a money transfer platform, known as RipplePay. The founder Ryan Fugger set the foundation of the Ripple effect in 2004, and it has been through many changes and developments over the years. Many people have contributed significantly in different prominent roles during the journey of Ripple.

The trio of David Schwartz, Jed McCaleb, and Arthur Britto set on the journey of developing their own solution outside the Bitcoin blockchain in 2009. Three years later, they came up with the XRP Ledger in 2012. The XRP coin gained substantial highs in early 2018 and obtained a $200 million Series C funding in 2019.

Also Read: How does bitcoin work? 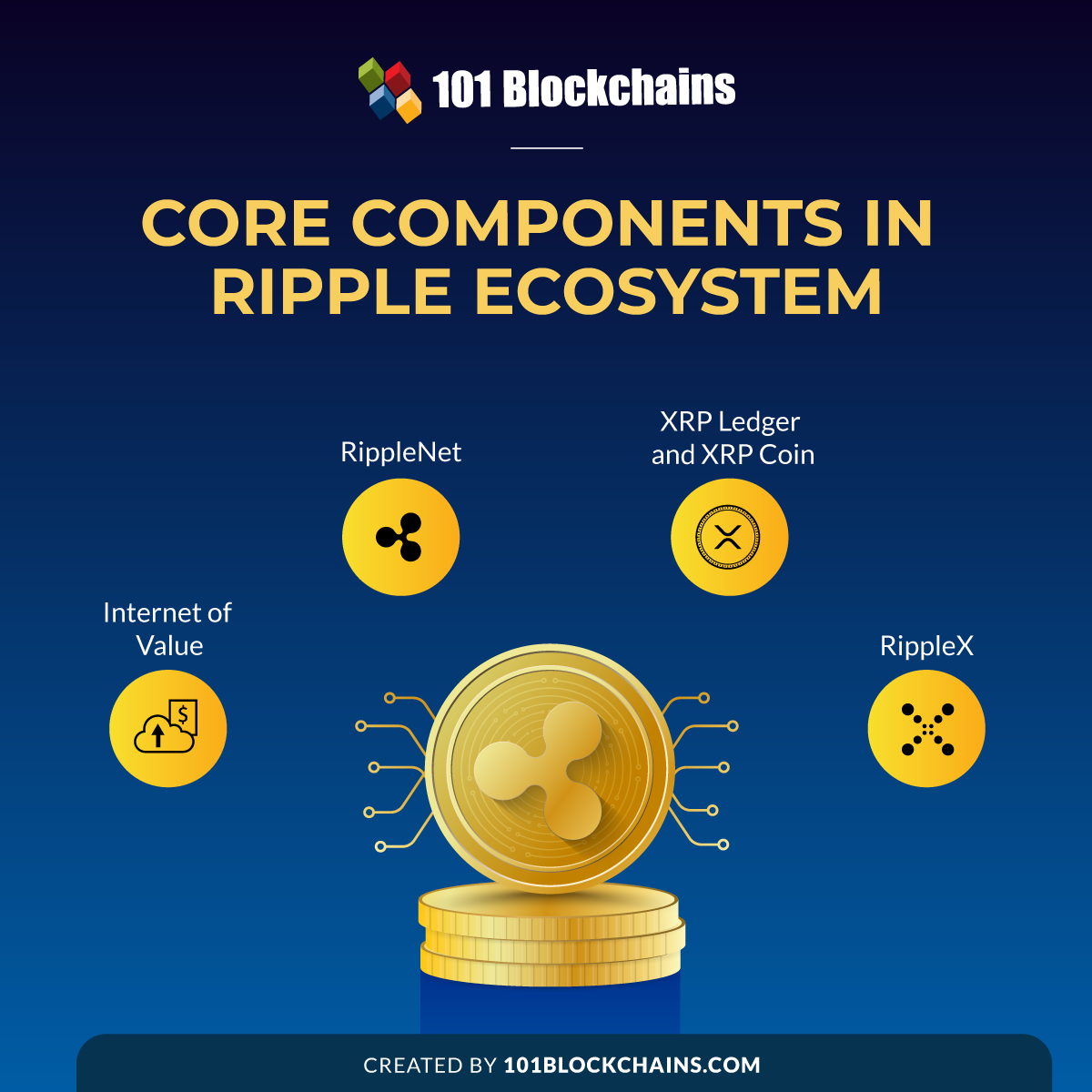 If you want to understand the Ripple blockchain clearly, then you should identify the components included in it. Many banks in the present time utilize the Society for Worldwide Interbank Financial Telecommunications (SWIFT) systems for processing international transactions. Despite the effectiveness of SWIFT systems, the increased costs and operational overheads can burden the parties involved in transactions.

The Ripple effect comes to play in such cases by introducing a number of solutions that work together in unison. All the components work together to create an efficient system to facilitate direct money transfers with real-time settlement implications. At the same time, the effect of the different components working together helps in reducing costs and improving transparency and security in comparison to conventional transfer systems. Let us find out the core elements which define the Ripple ecosystem.

One of the striking highlights of the Ripple cryptocurrency is the focus on Internet of Value. Ripple emphasizes IoV with specific implications towards transferring money and information at the same speed. Ripple is basically a huge umbrella of services with the objective of escalating the standards of the world of payments. Traditionally fragmented and cluttered payments could now become more organized, secure, transparent, and cheaper. The Ripple brand includes different components such as RippleNet, the XRP Ledger, and the XRP Coin, as well as RippleX.

One of the foremost aspects which you would come across while searching for Ripple price is the RippleNet. It is actually a global network, which financial institutions would leverage for transferring money with better speed. In addition, the global network also facilitates better transparency and lower costs in transferring money by leveraging a unified system. With just one API, RippleNet also takes away the complexities in use. As a matter of fact, RippleNet is a combination of different solutions of Ripple such as xRapid, xVia, and xCurrent.

However, Ripple blockchain uses them in different solutions, thereby making XRP synonymous with Ripple. The XRP Ledger allows users to develop solutions just like on the Ethereum blockchain. You might also want to know that the XRP coin is listed as a publicly-traded asset on different crypto exchanges with varying valuations in terms of USD value.

Another vital highlight about RippleX is that it leverages the XRP Ledger with the objective of simpler mainstream compatibility. You can explore two different protocols within RippleX for distinct functionalities in the Ripple blockchain ecosystem. The Interledger and PayString protocols have unique functionalities, such as the Interledger protocol’s role in introducing payments compatibility. On the other hand, PayString can support the simplification of payment addresses easily and effectively.

It is a unique open-source blockchain, which does not follow the conventional Proof-of-Work or Proof-of-Stake consensus algorithms. On the contrary, it follows an XRP Ledger Consensus Protocol for validating account balances and performing transactions. In comparison to other variants of consensus algorithms, the XRP Ledger Consensus Protocol offers the assurance of improved efficiency.

An interesting aspect of the working of XRP Ledger for Ripple coin would obviously refer to the contribution of independent participants in maintaining the XRP Ledger. Independent validators must reach a consensus or agreement for successful execution of transactions. Entities have the option of working as a validator in the Ripple network. The XRP Ledger creates ledgers rather than blocks, where each ledger records information that connects it to previous ledger in the chain.

In addition, the XRP Ledger also places the requirements for agreement regarding transactions and network alternation from a specific number of validators. The efficiency of Ripple cryptocurrency becomes clear with the time required for completing transactions. With the capabilities of the XRP Ledger, you can have confirmation for one block within three to five seconds. A promising improvement over the 10-minute window with Bitcoin blockchain, isn’t it?

Want to become a bitcoin expert? Enroll Now: Getting Started with Bitcoin Technology

The functionality of the Ripple coin depends a lot on the network supporting it. Participants have to interact with each other all over the world in the traditional money transfer infrastructures. Basically, you have to find out ways for working with different systems which may or may not support each other.

Ripple offers a global network with RippleNet for seamless transactions in the Ripple blockchain. RippleNet conforms to a specific framework and collection of parameters for ensuring simpler, more transparent, and seamless interactions among participants. At the same time, RippleNet also contributes towards reducing transaction times and costs.

In the case of traditional financial institutions with centralized frameworks, transactions take many days to complete. The various systems associated with the centralized processes in traditional financial institutions are the culprits for such delays. In addition, you can also notice other issues such as possibilities of errors, increased cost burdens, and negative impacts on efficiency of business transactions.

Ripple cryptocurrency helps you avoid these issues with the help of RippleNet, which utilizes the On-Demand Liquidity or ODL feature. The ODL feature takes away the need for any type of pre-funding in case of cross-border transactions. Imagine that one individual wants to make a cross-border payment and has a different currency.

For example, the receiving party in Sweden may not agree to receive Canadian dollars. In such cases, you can use Ripple XRP as the middle ground between the two distinct fiat currency types. How? The ODL feature helps you by doing the same and facilitates transactions by helping each side send and receive native currency.

Pros and Cons of Ripple

While the favorable Ripple price valuations can encourage you to choose the cryptocurrency, there are many factors you should take note of before doing the same. Let us take a look at the advantages and disadvantages associated with Ripple before you try using the platform.

Ripple blockchain presents one of the foremost benefits in the world of crypto by focusing on resolution of problems with conventional centralized financial systems. People have to wait for days to complete cross-border payments. RippleNet helps in resolving such concerns alongside improving speed of transactions and reducing the associated costs. Most important of all, the Ripple effect can expand in future as more companies move to the Ripple network from the conventional financial sector.

The foremost setback for Ripple cryptocurrency is evident in the competition from SWIFT systems, which are the existing market leaders. Ripple has a lot of ground to cover before it can disrupt the status quo in the traditional world of finance. In addition, Ripple has also encountered formidable competition from within the crypto space, including notable names like Stellar. Another critical setback associated with Ripple would refer to the lack of regulatory precedents in the crypto sector. The example of SEC’s disciplinary action against Ripple indicates the need for further improvement in terms of legal aspects.

Also Check: Top 10 Cryptocurrencies That You Need To Know About

The Ripple blockchain has gained considerable attention in recent times. Many companies, especially in the enterprise sector, are eager to adopt Ripple. As a matter of fact, many industry experts have suggested that the Ripple coin will become a valuable commodity.

Interestingly, the price of Ripple token had been growing faster in comparison to Bitcoin or other cryptocurrencies last year. While it presents some prolific advantages, Ripple has many other critical setbacks which require attention. How Ripple develops in the future and marks its unique position in the world of crypto is all a matter of time. Explore more about Ripple and how to participate in the ecosystem to know more.