Blockchain technology is relatively new. However, that has not stopped businesses from leveraging it, all in the effort of enhancing operational efficiency. Success stories on the use of the technology, justify the need of getting early on the technology. It is becoming increasingly clear of the need to understand various blockchain business strategies, for greater success in different business environments.

Blockchain is a peer to peer network that boasts of a decentralized incorruptible ledger. Every digital record transmitted in the chain comes with a unique timestamp that no one can tamper with. The network is also autonomous and decentralized therefore eliminating the need for centralized administration. 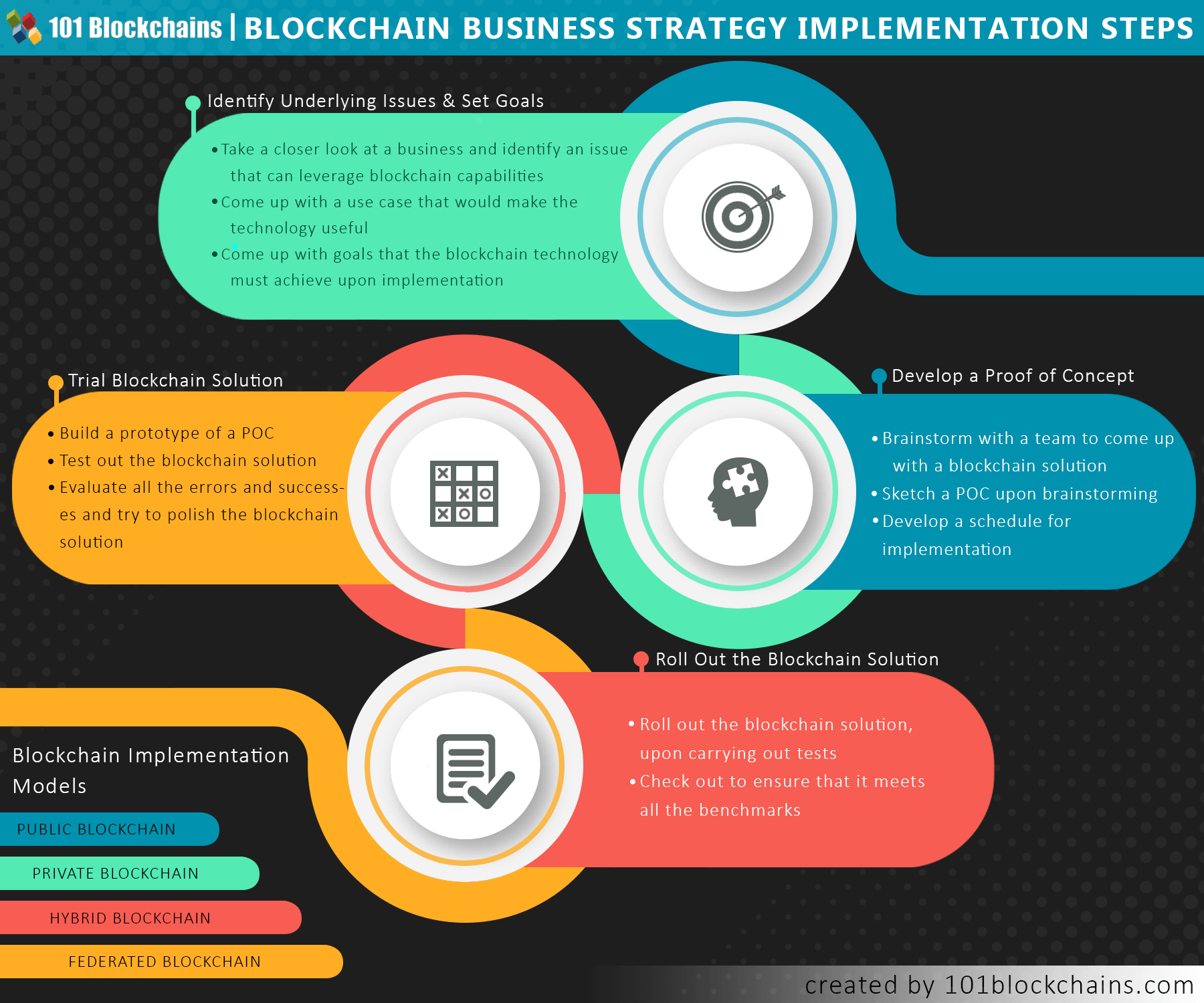 Blockchain business network is all about decentralization of data. The network removes reliance on a single storage unit by taking advantage of network nodes. Blockchain business strategies may vary. However, all of them come with critical attributes such as transparency, security, integrity, and efficiency that makes them stand out.

Any Blockchain business Idea should always be open to scrutiny as a way of enhancing transparency on a network. Anyone using such a network should be able to trace the history of a transaction whenever they feel like.

Blockchain business process should always adhere to the highest level of integrity. In this case, a transaction should only go through upon consensus on a blockchain business network. Users in a network should also operate independently.

Immutability of a blockchain new business model curtails the need for manual verification or third party verification. The hash aspect ensures the technology is unamendable.

What You Need To Know Before Implementing a Blockchain Business Strategy

Any Blockchain business idea should always take into consideration three key factors, they include:

The value of the digital ledger technology in a blockchain business network is one that continues to affirm its credibility as the technology of the 21st century. Blockchain is a second generation technology as it is set to revolutionize various sectors of the economy.

Being a global distributed ledger, blockchain allows the handling of items of value such as money to music as well as votes without the need of intermediaries. Getting rid of intermediary’s results in a reduction in transaction complexity as well as unnecessary costs regardless of blockchain business strategy of use.

Blockchain business models also leads to improvements in transparency as well as fraud controls, allowing businesses to generate maximum value from their operations.

While exploring a blockchain business strategy, it is important to come up with a scalable project. For a business to achieve the desired growth, it must be clear on the short term, the probable return on investment. Setting short-term goals is a must, as a way of accruing the actual benefits of the technology.

Cost reduction is one of the most successful short-term goals as a way of achieving a return on investment on leveraging blockchain technology.

Integration of short-term and long-term blockchain business strategies on the initial strategy is essential. Finding a way of integrating the two is a sure way of enjoying the full benefits of the ledger technology. For example, a pharmaceutical company can use technology, in the short-term, to reduce product loss as well as shipping time, therefore, increase success rates.

How to Implement a Blockchain Business Strategy

Blockchain technology is still in the nascent years of development. However, there are still a number of ways one can put the technology to great use. When it comes to implementing a blockchain business strategy, there are steps a business ought to follow for greater success.

Focus on a Specific Issue

By limiting areas of focus, a business would be able to enjoy greater efficiency and in the process optimize blockchain capabilities. For this reason, a business manager should take time to brainstorm with their team to see where the technology would be of great use. This could be in logistics and supply management, record keeping or leveraging the technology to enhance transactions.

A blockchain business strategy, in this case, should focus on an operation that would require additional tweaks in future. The ledger technology is still evolving, and new capabilities, as well as features, are poised to crop up going forward.

Nose-diving full throttle into leveraging blockchain technology could turn out to be suicidal in the long run. A blockchain business idea should thus focus on implementing the technology on a step by step basis.

The fact that blockchain technology would require a lot of changes along the way also calls for a lot of caution. For this reason, it would be important to focus on small solutions leveraging the technology that would have a big impact.

Relying too much on technology as part of the blockchain business strategy is not ideal. Instead, remain steady, focusing on using the technology on specific use and avoiding the temptation of scope creep.

Come up with a POC and connect all Expectations

During the planning phase, it would be important to have discussions with various people with different opinions and visions. By brainstorming, ideas should crop up on how to better use the technology to address underlying issues. Brainstorming is also essential as it allows one to nourish an entire blockchain business idea before the implementation stage.

Going back to configure the flaws should come into play as a way of getting the best out of a blockchain business strategy. This would be the perfect time to go back to the team members to brainstorm once more about the underlying flaws and how to better solve them.

Testing a million time after every successful fix is the only way one would be able to get the best out of blockchain technology. The more complex the blockchain solution, the more fixing and testing would have to come into play.

Partnering with other companies may also have to come into play as a way of fine-tuning a given blockchain solution. A good number of companies’ exist, willing to spend a lot on a blockchain project with tremendous prospects.

Where to Implement a Blockchain Business Strategy

When it comes to implementing a blockchain business strategy in a public blockchain, a business would essentially give people, from all walks of life, to access a network’s content. In this case, there are no restrictions as to who can enter or when one can enter to access network content.

A public blockchain operates with an incentivizing mechanism designed to encourage more people to join the network. Bitcoin is a perfect example of an ideal public blockchain given that the chain is open for everyone.

In addition, a business will have to be aware of the fact that to achieve consensus each node in the network will have to solve a complex cryptographic problem dubbed proof of work. Another disadvantage of a public blockchain in a business setting has to do with the lack of privacy when it comes to transactions. A business may not be able to keep some vital transactions private given the nature of the public blockchain.

Regulations can be made taking into consideration the nature of the transactions as well as their speed and intent. Private Blockchains also allow orders of magnitude greater than scalability when it comes to transactional throughput.

Private Blockchain is an ideal blockchain strategy implementation platform for businesses that want to make good use of blockchain capabilities but in a controlled environment. The Linux Foundation is a perfect example of a private blockchain given that one requires an invitation to join the network.

However, of notice, is that Private Blockchains are not entirely out of bounce from the public. People will still be able to access the contents of the blockchain but based on what the administrator wants them to see.

Implementing a Blockchain Business Strategy on a Hybrid Blockchain

Hybrid is an ideal blockchain for highly regulated enterprises as well as government departments looking to leverage blockchain capabilities. Implementation of a blockchain business idea in Hybrid allows a business to have greater flexibility and control over data shared on a public ledger and that kept private.

A federated blockchain is essentially a hub whereby organizations are able to exchange information on a single network. The entities involved in such network come together from time to time and make necessary changes that keep and make a network work more efficiently.

Federated Blockchain gives rise to a decentralized network whereby each entity can access the network’s content. Unlike with Private Blockchains, where one entity or individual is in charge, in a federated blockchain each entity is in charge of the happenings in a network.

Public blockchains are decentralized networks that come with a good level of security. However, they lack speed and efficiency. Private Blockchain, on the other hand, tend to be much scalable and faster but are not fully decentralized.

Federated Blockchain offers the ultimate solution to a consortium looking to leverage the full benefits of the ledger technology as a whole. Federated blockchains tend to be much faster when it comes to processing transactions.

The fact that the number of nodes needed for validation is always under control reduces the risk of scalability issues. In addition, the fact those transactions are much faster and less complicated leads to lower transactions costs in a federated blockchain.

Federated blockchains are for specific groups or entities. The fact that they do not allow random strangers on the network reduces the risk of 51% attacks.

Blockchain as a Service

Tech giants are increasingly investing in Blockchain given the technologys’ potential in enhancing operational efficiency. Increased investments has essentially given rise to Blockchain as a service.

Amazon has already unveiled blockchain templates as part of Baas that allows Amazon Web Service users working on blockchain set up hyperledger Fabric and Ethereum networks much faster. The templates also make it easy for people to deploy blockchain networks with ease.

Microsoft bills itself as the pioneer of BaaS industry. Through Azure, the software giant has simplified the process of coming up with blockchain networks thanks to pre-configured networks and infrastructure. Built-in connections allow users to validate and iterate various blockchain developments.

Oracle on its part has unveiled Enterprise-Grade Blockchain Cloud Service. The service offers enterprise customers a fully managed approach as well as a framework for getting involved in the blockchain. Its blockchain as a service is built on open source Hyperledger Fabric Project.

One of the key advantages of blockchain technology is that it is helping reduce friction between parties involved in the exchange of information. Blockchain business processes are increasingly gaining traction in part because the technology is assisting streamline various operations.

The digital ledger technology elevates the level of blockchain business network in two ways. First, it enables easy recording of transaction history that have taken place in an entire business network. Transactions in any chain are provable and immutable thereby allowing people to have confidence on data a chain.

How Blockchain is revolutionizing Business Processes

Recruitment, contact management as well as Fintech are some of the key areas where blockchain business strategy are gaining traction. Expansion beyond cryptocurrency has seen the technology find its way into key business operations.

Below are some of the emerging blockchain business strategies shaping various industries.

That said businesses looking to enhance their operational efficiency should continue to invest big on the technology and embed it as part of their businesses strategy.