Readers could use the following discussion to understand the definition, benefits, and use cases of Self-Sovereign Identity (SSI).

Digital transformation has brought us all to an interesting milestone in history. In the present era, communication is no more an issue with various platforms for facilitating information exchange and transactions among individuals. Basically, the digital world is slowly turning out to be a virtualized representation of our actual world.

Like real people in the world, the digital world relies on user names and accounts for recognizing identity. Therefore, it is important to reflect on the approaches followed for digital identity in the present times. Self-sovereign identity or SSI has been gaining attention in recent times as one of the emerging concepts in digital identity. The following discussion serves as a helpful guide for all the fundamentals and concepts related to SSI.

Most important of all, you can find out the self-sovereign identity blockchain equation effectively. With the constantly rising adoption of blockchain and complexities in cybersecurity, it is important to take note of SSI as a trustworthy identity model.

Before diving into the details about self-sovereign identity, it is important to find out the reasons for which it was needed in the first place. The initially accepted model for digital identity was siloed in nature. All organizations issued a single digital identity credential for users to access the organization’s services.

The digital identity credentials such as ‘Login with Google’ or ‘Login with Facebook’ features can help users for logging into services as well as other websites. So, in a sense, businesses had to outsource their identity management tasks to major enterprises with an interest in collecting massive databases of personal data.

As a result, it is inevitable to note the possibilities of security and privacy concerns with Google, Facebook, and other third parties transforming into intermediaries of trust. Self-sovereign identity came into existence as a third model of digital identity with the rise of blockchain technology. Let us take a look at the implications associated with the fundamentals of SSI to understand it better.

What is Self-Sovereign Identity?

A self-sovereign identity literally translates into an identity that is under your ownership. However, one could reasonably ask about the need for identity like SSI when you have your national ID card, gym membership card, and student ID in your pockets. This is where you need to consider the pitfalls associated with physical and digital IDs used commonly today. 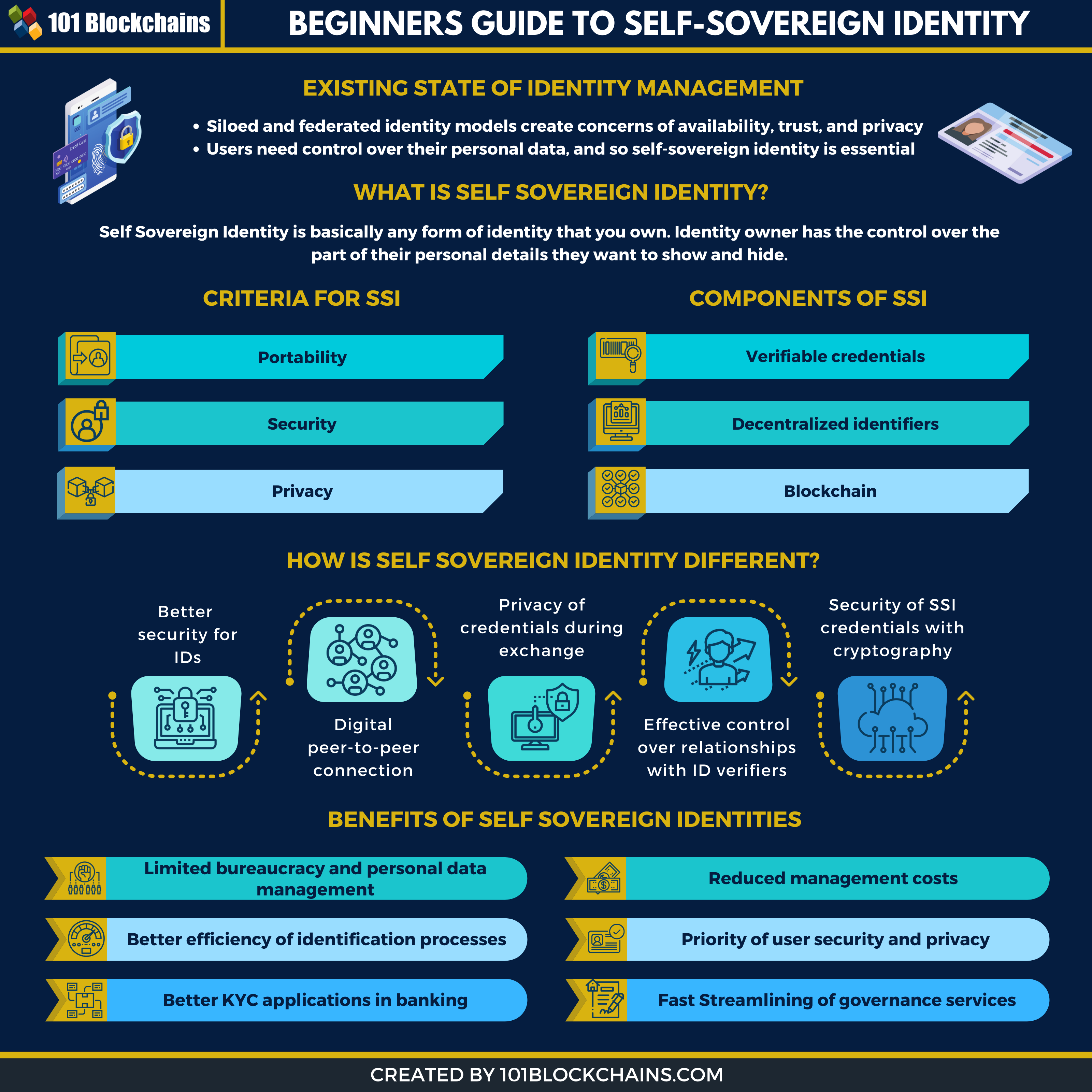 The physical IDs are generally physical credentials such as cards issued by the Government, employer, university, gym, or any other store for verifying that the cardholder is a citizen, employee, student, member, or customer of the organization. However, physical IDs have many issues, such as the time, costs, and bureaucratic delays, along with concerns of ID theft and impersonation. Physical IDs also lack privacy and possibilities of destruction of the repositories issuing physical IDs.

Digital IDs are accessible by registering for a service with an email address or user name and a password. Digital IDs also enables users to leverage third-party login services such as Login with Facebook or Login with Google. However, digital IDs also have their fair share of setbacks.

Users don’t have any control over the sharing of their data and face risks due to vulnerability of the centralized repositories of personal data on the issuer’s servers. In addition, users have to depend on availability of issuers for verifying their credentials. Privacy is often at risk with third-party login services featuring financial incentives for data collection and storage.

How is Self-Sovereign Identity Different?

Even the SSI system provider does not have any idea about the exchange of credentials. Therefore, the process of issuing credentials becomes faster and simpler. The self-sovereign identity blockchain characteristics are evident with cryptographic hashing ensuring that SSI credentials are tamper-proof.

The Selective Identity Disclosure technology in SSI also enables better privacy for users. At the same time, users could achieve better control over their data.  The most important highlight of SSI is that the ID owner has the privilege of selecting the attributes of their identity they want to showcase.

The ID owner is also entitled to comprehensive control of relationships with ID verifiers for transparency into data being shared. Furthermore, it is easier to verify self-sovereign identity credentials easily at any time from any location. Another interesting facet about SSI is that users don’t have to depend on multiple passwords and use only their wallet password.

Therefore, identity could be self-sovereign if it fulfills the following criteria,

So, it would not be unfair to claim that self-sovereign identity features better portability, security, and privacy, which is a lot similar to blockchain features.

Components and Working of SSI

Watch on-demand webinar on decentralizing the identity in blockchain with TrustID now!

According to W3C, the Verifiable Credentials protocol is a fundamental pillar in self-sovereign identity. The physical credentials used in real-world such as a driver’s license or an ID card, barely have digital representatives. So, it is reasonable to doubt the credibility of a digital credential at the same level as physical cards issued by the Government. In this case, verifiable credentials provide representation for statements of issuer made with privacy-safeguarding and tamper-evident manner.

From the technical perspective, verifiable credentials involve digital watermarking of claims data by combining public-key hashing in cryptography and privacy-protecting techniques. So, physical credentials could be transformed safely into digital. Holders of the credentials have options for selective disclosure of specific information from the credential without exposing actual credential data.

Generally, self-sovereign identity blockchain applications rely on two different levels for safeguarding the privacy of credential holders. The two levels include selective disclosure and zero-knowledge proof. The selective disclosure approach enables generating proofs from certain attributes for a credential. For example, you don’t have to disclose your address on your Driver’s License to prove your age. The zero-knowledge proof approach helps in proving a specific attribute of the credential without revealing its value.

The next important facet in self-sovereign identity reflects on decentralized identifiers. Decentralized identifiers or DIDs are a crucial aspect of SSI and help in creating unique, secure, and private peer-to-peer connections between two entities. Presently, users have to depend on identifiers from intermediaries such as email providers, Facebook, mobile network operators, or Google for connecting with each other.

However, the involvement of third parties creates notable concerns in privacy. Although the intermediaries can use your data with other metadata to offer targeted ads, the data correlation practices can create serious consequences. Decentralized identifiers or DIDs are classified into public and private DIDs. Private DIDs could be exchanged between two parties for creating a secure channel that is inaccessible for others. Private DIDs allow creation of separate DIDs for different relationships for avoiding data correlation. Here, they are using private blockchain to develop the solution.

On the other hand, public DIDs (uses public blockchain) are important when users want to be public identifiable, such as in the examples of government office issuing passports. Therefore, decentralized identities provide a trustworthy boost for self-sovereign identity systems for safeguarding the privacy of credential holders.

Here’s a comparison guide to public vs private blockchain that will help you differentiate between the two platforms.

Now, we can turn towards the self-sovereign identity blockchain equation and how it works. Many people have reasonable concerns about the role of blockchain in the working of SSI. In the domain of identity management, blockchain helps every participant in the network to access a similar source of truth. As there are lots of benefits of blockchain technology, it’s perfect for using in digital identity spectrum.

Benefits of Self Sovereign Identities

The clarity regarding fundamentals of self-sovereign identity is enough for understanding how it can revolutionize identity management. On the other hand, it is also crucial to note the benefits of SSI systems, which make them unique. SSI solutions can allow organizations to store the minimum required amount of personal data of users required for their operations.

As a result, users can find lower levels of bureaucracy and limitations on personal data management. Enterprises could find out better opportunities for reducing management costs while enhancing the effectiveness of identification processes. At the same time, self-sovereign identity systems also focus prominently on security and privacy of users as top priorities.

Companies using blockchain technology are presently focusing on storage of personal data of customers or employees as one of the major concerns. However, self-sovereign identity blockchain functionalities allow decentralization, thereby preventing any compromises in personal data of customers and employees. Therefore, many companies are likely to adopt SSI solutions for capitalizing on these benefits for their identity management systems.

Example Use Cases of Self Sovereign Identities

The final aspect in a beginner’s guide on self-sovereign identity ultimately brings attention to its enterprise blockchain use cases. Presently, SSI solutions are providing benefits for various industries by creating better banking experiences, developing a healthcare system with better efficiency, reducing governmental bureaucracy, and supporting the delivery of efficiency in humanitarian aid distribution system. Here are some examples of SSI use cases in different industries.

On the other hand, it is also important to note the long-term implications SSI would have for different sectors. The different use cases of SSI in various sectors show their promising potential to change the identity management game forever. If you want to explore more details about blockchain identity management, then start with the Blockchain Fundamentals course right now! Go ahead and learn more about self-sovereign identities right now!