Are you looking to learn about hashing in cryptography? If you do, then you have come to the right place.

In this article, we will explore more about hashing.

Let’s try to understand by example.

Well, colleges and schools provide a uniquely assigned number to each of their students. This unique number is what identifies a student and the information related to him. The method used to generate the unique number is Hashing.

Another popular example is libraries where you will find tons of books on the shelves. Each book there has its unique identification number so that it can be located in the huge library!

A modern example of hashing would be game players that register for the game. Valorant is a free-to-play game launched by Riot. Being free-to-play means that millions of people will play the game.

If you want to know how cryptography and blockchain are inter-related, enroll now – Certified Enterprise Blockchain Professional (CEBP) 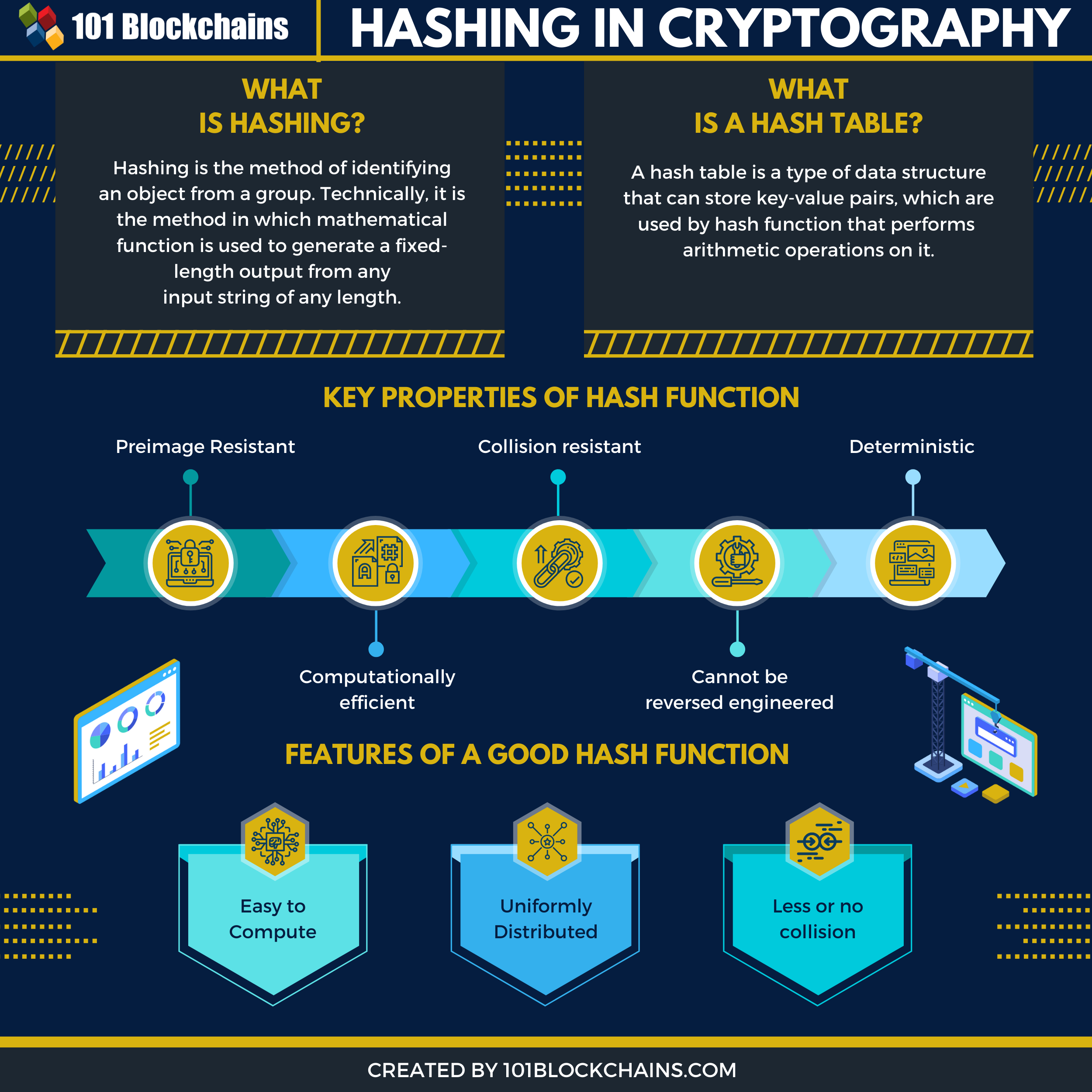 Let’s try to understand it in more detail below

As stated above, Hashing is the method of identifying an object from a group.

Each object gets a unique identification number once hashed.

But, what does that mean technically?

Technically, a mathematical function generates a fixed-length output from any input string of any length.

If you put in “Hello, World!” in an SHA-256 hashing algorithm, you will get the following output:

The key properties of the hash function make it reliable. Let’s list them below.

But, if you are here for advanced stuff, you will not be disappointed.

What is Hash Function And Hash Tables? And How Do They Work?

In this section, we will explore the hash function and hash tables in more detail. In terms of hashing, there are hash functions. These functions are responsible for converting large inputs into small fixed inputs. The hash tables store the outputs.

In the hashing process, the objects are distributed based on their key/value pairs to the array. So, if you pass an array of elements to the hash functions, you will get an array output where each of the elements now has a key attached to it. The key/value pair is very useful when it comes to accessing elements in real-time as it offers an impressive O(1) time.

To implement hash functions, you can take off the two preferred approaches.

In the 2nd method, the functions will be as below:

Here, the hash and the array sizes are independent of each other. The index value is calculated based on the array size. Modulo operator(%) enables us to calculate the value.

In simple terms, a hash function can be defined as a function that can map arbitrary size data set to a fixed size data set. The resulting fixed sized data set can be stored in the hash table. Many names are given to the values returned by the hash function. They can be called hash values, hashes, hash sums, and hash codes.

If you want to create a good hash function or mechanism, you need to understand the basic requirements of creating one. Let’s list them below:

Why Do We Need A Good Hash Function?

To understand the need for a useful hash function, let’s go through an example below.

Clearly, the sum of the three numbers is also 307. This means that if we permute all the numbers and then do a modulo operation, we will get the same result. The end result would be storing all the strings to the same index number. The algorithmic time for the hash function would also be O(n) complexity, which is not desirable. We can easily conclude that the hash function that we described is not optimal for real-life scenarios.

To fix the hash function, we can deploy dividing the sum of ASCII values of each element by another prime number, 727. By doing so, we will get a different output for our given input strings array.

The hash tables are very useful in storing the result of a hash function, which computes the index and then stores a value against it. The end result would be faster computational process with O(1) complexity.

So, if you pick up a string of a fixed length and then try to learn the string’s character frequency.

So, if string = “aacddce”,  then a generic approach is to go through the string multiple times and store each frequency.

#Provide an input string, and count the frequency of characters in that string

#The algorithm is 0(n) complexity time

The output of the above program will be as follows:

Now, let’s implement a hash table in C++ and count the character frequency.

The output of the program would be as below:

The O(N) complexity of the algorithm makes it faster compared to other linear approaches.

How to resolve Collisions

There are unique ways to solve collisions in hash functions. One of the popular ways is separate chaining which is also known as open hashing. It is implemented with a linked list where each of the elements in the chain is itself a linked list. This approach enables to store elements and ensure that certain elements are only part of the specific linked list, resolving collision. That means that no two input values can have the same output hash value.

In this section, we will quickly look out at hash in Python. The reason we choose Python is that it is easy to read and can be used by anyone without much trouble.

As hashing is a common function, it is already implemented in the Python library. By using the module, you can provide an object as its input and then return the hashed value.

The syntax of the hash method is:

As you can see, it takes in a single parameter, which is the object. The object can be integer, float, or string.

The returned value of the hash() method depends on the input. For an integer, it might return the same number whereas for decimal and string would be different.

Let’s see some examples below.

The output of the above code is as below:

However, hashing cannot be applied to all object types. For example, if you remember that we created a list of a to z in our first program. If we try to hash it, the output window will through a TypeError: unhashable type: ‘list’ 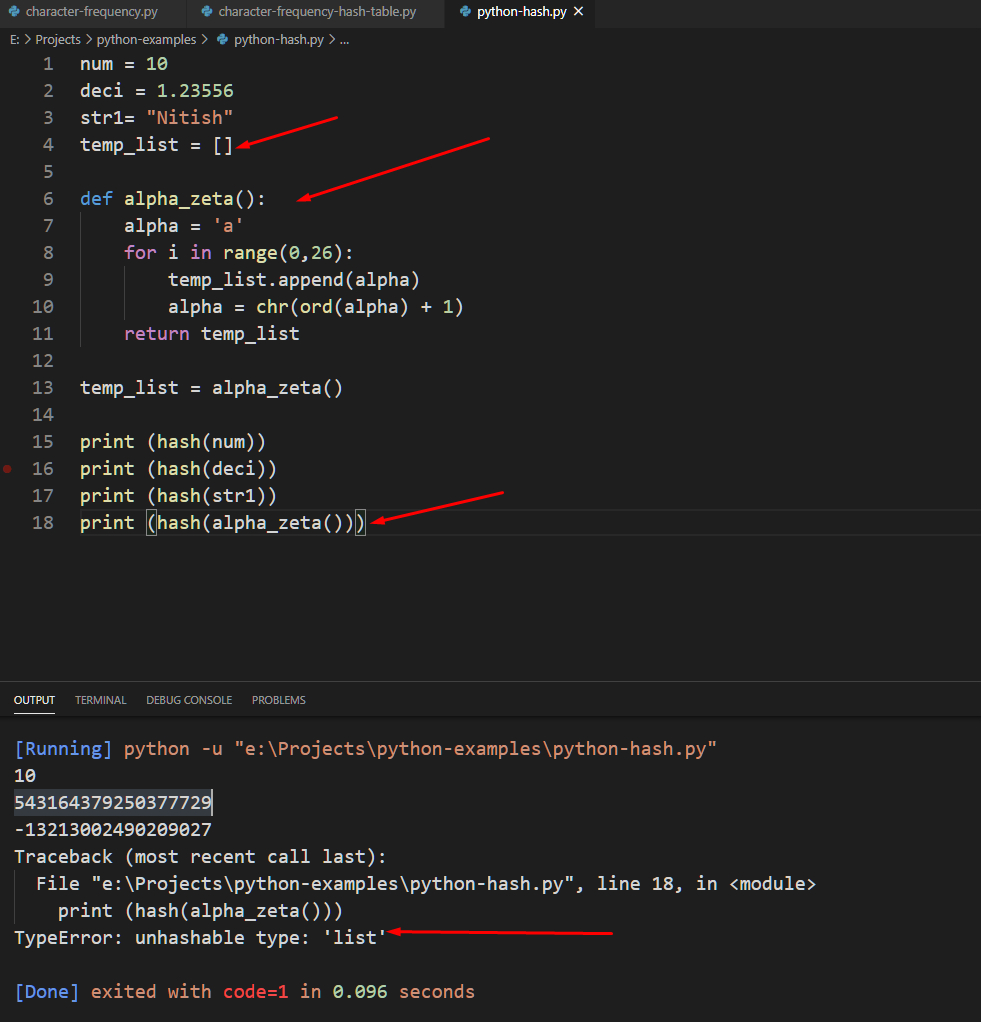 To apply hashing to an object list, you need to use tuple.

Also, hashing has been part of cryptography for quite a long time. However, the best use case of hashing is to hash passwords and store them.

Merkle tree is a data structure that is useful when it comes to doing secure data verification in a large data pool. Both Bitcoin and Ethereum utilize Merkle trees to solve many technological barriers when storing and accessing data in an open network.

Any centralized network does not have to worry about storing and accessing data as there is only one source for both accessing and storing the data. However, the equation changes when there is a decentralized network as now the data needs to be copied among hundreds of participating peers.

Merkle trees solve the problem by providing a trusted and efficient way to share and verify data among peers. 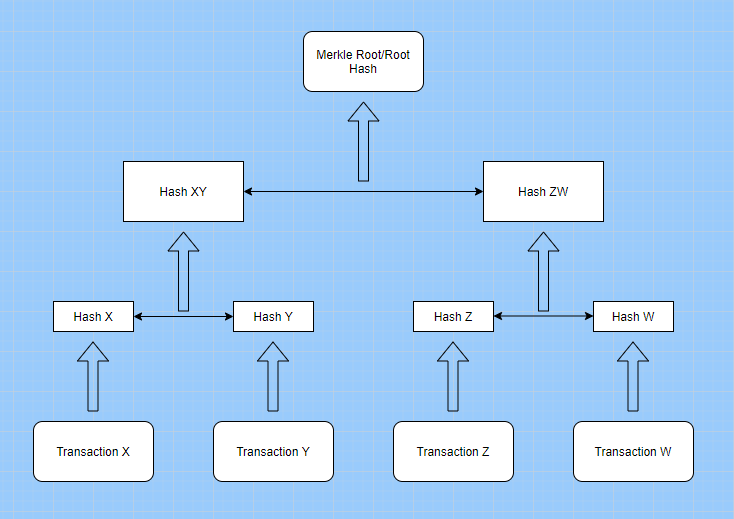 But, why are we discussing Merkle trees here? Merkle trees use the hash as the core functionality to connect the different nodes and data blocks.

Merkle Trees is an upside-down tree that can summarize the whole transaction set.

If you want to learn more about Merkle trees and how it uses hashing in cryptography, check out our detailed guide: A Guide To Merkle Trees. There, we discussed how Merkle trees implements are done in bitcoin and other use-cases.

The mining process also takes advantage of hashing. When it comes to bitcoin mining, a new block is added to the blockchain when there is a demand for it.

A  method needs to be followed to add the block to the blockchain. A hash value is generated depending on the block’s content when a new block arrives. Also, if the generated hash is more than network difficulty, the process of adding the block to blockchain gets started.

Once done, all the peers in the network acknowledge the addition of the new block.

But, that is rarely the case as the network difficulty, in most cases, is always higher compared to the generated hash. There is another aspect that plays a crucial role in the mining process. It is the nonce.

The process can be summarized in the following steps:

The term “hash rate” also comes in from here.  The Hash rate is the rate at which the hashing operations take place. A higher hash rate means that the miners would require more computation power to participate in the mining process.

This leads us to the end of our hashing in cryptography in-depth guide. We covered hashing in detail and also explored the code behind it.

So, what do you think about it? Comment below and let us know.

What is hashing in cryptography?

In cryptography, hashing is a method for converting data into a unique string of text using an efficient method. Also, there is no limitation on the type of data or its size — hashing works on all of them.

How is hashing used in cryptography?