Do you want to know about the companies that are investing in blockchain? If you do, then you have come to the right place.

Innovation comes at a cost, and it is up to big companies to provide the cost for the initial big push.

Blockchain innovation is no different. It requires collaboration from the largest companies and innovative startups to push the boundaries.

Blockchain technology is currently in its early stages, where there is still time for it to mature. There are already multiple projects related to blockchain that are trying to solve the distributed ledger problem in new ways.

Blockchain is a distributed ledger technology. It offers the ability to communicate, transact, and store data without a centralized entity.

There are some key features of blockchain that make it so amazing! These features include:

Are you interested in learning more? Then, check out the following articles

Blockchain: Hype or Not?

Blockchain’s hype is something that not every one of us can agree on. Is blockchain really going to change how we solve problems in the future? Well, that’s hard to answer. But, there are still different opinions on whether blockchain is the answer to all the problems.

We are discussing blockchain hype because it determines the investment drive of companies. However, we can also see the situation from a different scope where the company’s investment impacts the hype surrounding blockchain.

In any of the cases, it is hard to ascertain the real impact of blockchain until it matures. Thus, if you pick up the numbers, predictions indicate that blockchain development is bound to grow in the coming years. Apart from the development of budget growth, the blockchain spending will also see a 76% year-by-year growth and can reach $14.4 billion by 2020.

Bruce Schneier, a security technologist, is not a fan of blockchain technology. His piece on why there is no good reason to trust blockchain on Weird explains why he thinks that way.

On the other hand, if we take cryptocurrencies, then blockchain might be in a good place. Bitcoin soared to new heights in 2019, where it reached $19K. However, it did fall to a mere 3$K in the upcoming weeks, but it is now hovering stable around $10K. There are already predictions by many investment gurus on how bitcoin can read $100K in the future. If it will reach there or not is a debate for another topic.

Now that we have covered quite a bit about the blockchain, it is now time to see which companies are mostly interested in blockchain technology and are helping it grow to new heights.

If you are interested in learning which companies are using blockchain technology, check out the detailed article on it: What Companies Are Using Blockchain Technology? 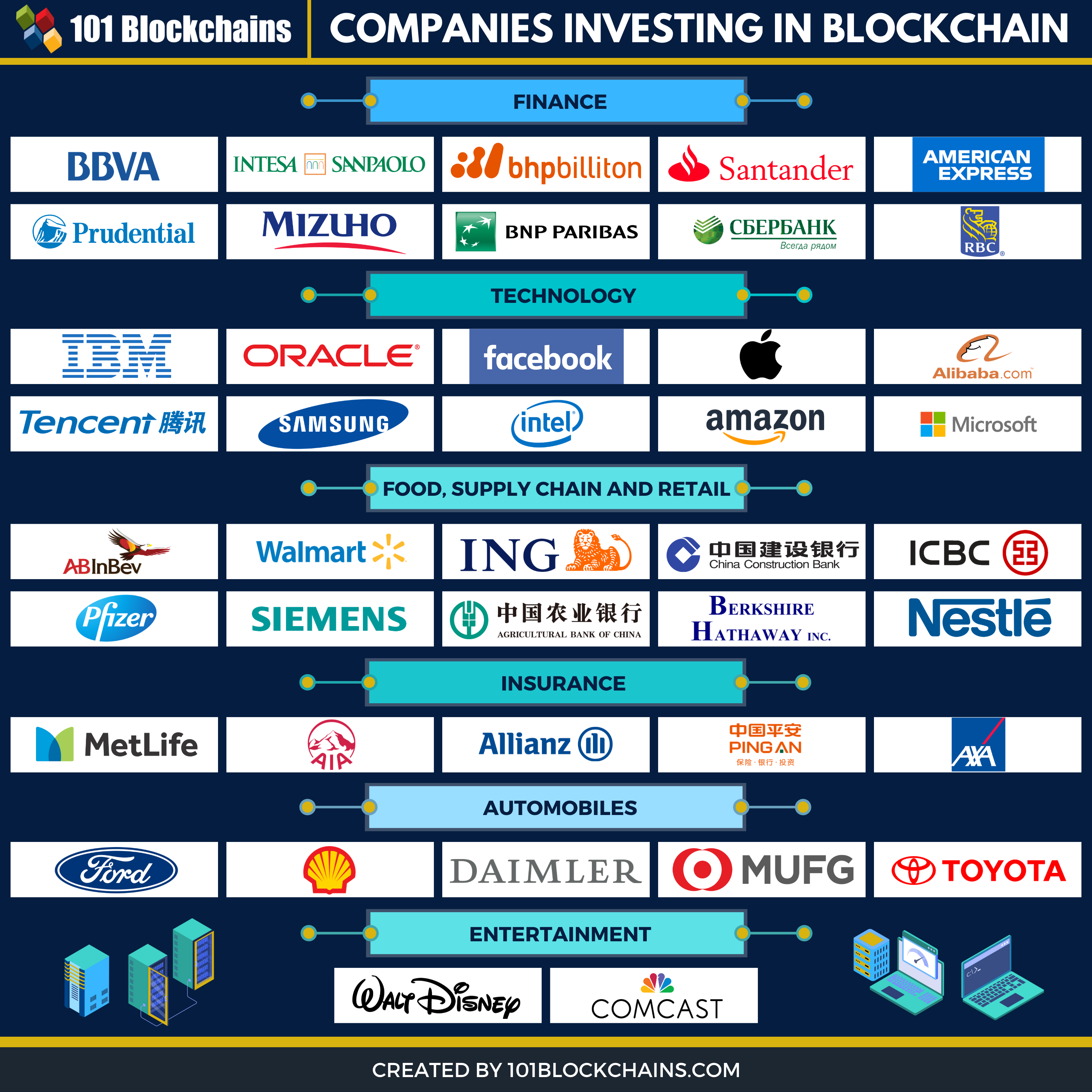 The finance sector is one of those sectors that have a good reception for blockchain technologies. The financial sector companies are also more conscious when it comes to seeing the benefits and, hence, coming forward to invest in the technology.

The financial companies investing in blockchain include the following:

Another financial company that is invested in the blockchain is Banco Bilbao Vizcaya Argentina. The bank recently closed a 75 million pound corporate loan using Hyperledger Fabric and Ethereum. With a market cap of $21.8B, they are one of the largest banks in Spain. They engage in different sectors including private banking, asset management, retail banking, and wholesale banking.

Mizuho Financial Group from Japan is one of the early adopters and has invested in multiple blockchain projects. They are a holding company that provides multiple financial services including trust banking, securities, banking, and others!

BHP Billion is one of the largest mining companies that is trying to improve its supply chain with the help of blockchain. There is no doubt that a blockchain-powered supply chain can be beneficial for a business if implemented correctly. To learn more about how the supply chain is impacted with blockchain, check out our article on it: Blockchain For Supply Chain: The Game Changer

Also, check out The Ultimate Blockchain And Supply Chain Course!

Prudential financial is another giant financial company and is known for backing up Blockchain Firm Digital Currency Group. Along with them, Foxconn and Western Union have also invested in the Group, improving the blockchain technology landscape.

Intesa Sanpaolo is an Italian bank that has invested in public blockchains. For now, they have invested in bitcoin technology and Ethereum. Therefore, they are using these two technologies to improve their business processes.

Sberbank Russia is a Russian bank. They launched a blockchain lab and are also working with Russia’s securities to explore the idea of blockchain corporate bonds. In reality. they engage in both retail and corporate banking activities, including settlement services, payroll projects, asset management, corporate loans, and more!

The Royal Bank of Canada is exploring blockchain technology by checking out the different blockchain solutions for automating credit scores. They are based in Canada and operate through many segments including insurance, wealth management, commercial and personal banking, and so on!

Banco Santander is another popular bank in Spain. Their investment is in the Ripple technology and also in Digital Asset Holdings. They work in different segments including Santander Global Platform, South America, and North America.

A France-based BNP Paribas bank that is investing in blockchain technology to internal treasury operations. They operate in multiple sectors, including corporate institutional banking, retail services, helping community associations, individuals, entrepreneurs and others.

Well Fargo & Company is a well-known company in the United States. They are financial services that are community-based and are diversified in nature. They engage in multiple activities, including investments, insurance, banking, commercial finance, consumer and mortgage.

Oracle is one of the technology companies that are in the frontier of blockchain development and collaboration. Furthermore, they offer their blockchain services to other companies so that they do not have to build it from scratch. Thor cloud service and SaaS application can work with different business processes, including the supply chain. They also offer on-premises editions.

Apple is a computer technology giant that is working behind the door on blockchain technology. They have filed patents to timestamp data. They are also working on using it in different sections of their business process, but the word is not out there on how they are going to approach the implementation process.

Alphabet is an umbrella corporation that incorporates Google. They are working with Digital Asset so that they can include blockchain platforms and their related developer tools to the Google Cloud Platform ecosystem. Google, on the other hand, is also investing their resources and talent in blockchain technology. They now offer services to deploy cloud applications or hybrid blockchain using Google Cloud and Ethereum.

Tencent Holdings Ltd: is a China-based investment company that engages in online advertising services and value-added services. They announced they are exploring taxes and blockchain.

Alibaba Cloud offers blockchain as a service where they enable businesses’ enterprise-level platform without the need to manage the actual infrastructure. Their BaaS supports Ant Blockchain technologies, Quorum and Hyperledger Fabric.

Facebook revealed their Libra cryptocurrency plans and integrated the cryptocurrency payment plan to the social media platforms. The initial support for them was huge. With time, they have refined the process and now they will focus on government-backed cryptocurrencies. Their other project is Novi, which is a digital wallet.

IBM is also the front-runner when it comes to investing in blockchain. Their IBM blockchain service enables businesses to use blockchain technology and not worry about creating the blockchain network. Businesses can join existing networks, build their own solution, and create a solution that works!

Amazon is also heavily invested in blockchain technology. They are offering cloud integration to popular blockchain solutions including Ethereum. More so, they are also partnered with ConsenSys. Apart from that, they also offer the Amazon Managed Blockchain, which lets businesses to manage and create scalable blockchain networks. With it, businesses can use Hyperledger Fabric with support for Ethereum coming soon. They also have their own verifiable ledger database technology Amazon QLDB.

Intel also understands the importance of blockchain and hence is working towards shaping blockchain technology. So, Intel is currently collaborating with other industry leaders, customers and thought leaders to improve blockchain technology and help mature it. In their blockchain ecosystem, they have three major blockchain players, including Hyperledger, Enterprise Ethereum Alliance and R3.

Morgan Stanley is a US company that is interested in improving blockchain technology. They are invested in bitcoin futures contracts for their customers.

Samsung is also keen to improve blockchain and has been working on its Nexledger platform that will track the global supply chain.

The insurance industry is in dire need of chance, and blockchain technology can be a catalyst to change. The key companies that are investing in blockchain include:

MetLife from the United States is partnering up with other companies such as IBM and Majesco so that they can build their own insurance blockchain platform.

Allianz SE is working towards creating a self-reliant insurance platform. They also created a prototype for their platform.

Walt Disney Company is a US-based company using Dragonchain, a blockchain solution for improving its platform. They developed it internally in 2014 and then open-sourced it in 2016. There is also a commercial entity that is managed by the Dragon Company.

Comcast Corporation is interested in blockchain technology and is showing that interest by investing in blockchain startups. They also announced their own blockchain platform known as Blockgraph. More so, it is a peer-to-peer platform that will help protect the marketers and media companies’ data.

Ford Motor Company is investing in blockchain as they plan to use it for the auto industry. They patented their research on controlling traffic flow using blockchain.

Mitsubishi UFJ Financial Group is planning to launch its blockchain solution. They have already joined hands with Ripple payments network

Daimler AG from Germany also has a keen interest in blockchain as they made a 100-pound corporate bond with ethereum. They are makers of Mercedes-Benz and are experimenting with their own cryptocurrency.

Toyota Motor Corp. is another automobile company that is exploring blockchain. Furthermore, they are exploring the idea of enabling self-driving cars with blockchain payments.

Food, Supply Chain and Retail, and others

Other companies in the market are actively investing in blockchain technology. They are as below.

This leads us to the end of our top companies investing in blockchain 2020. As you can see, there are so many companies in different verticals investing in blockchain technology and helping evolve it to new heights. More so, Blockchain is still in its infancy stage, and it will take the effort of all the major players and startups to make it mature. The blockchain adoption rate is also improving with time, and we can surely see it in a better place in the near future.

So, what do you think about blockchain technology and the companies investing in blockchain? Comment below and let us know.