According to Glassdoor, the demand for blockchain-based jobs showed a growth of 300% in 2019 as compared to the previous year. Based on your knowledge of the blockchain landscape, you might have explored some of the promising career options in the blockchain.

The following discussion takes you through some of the important statistics showcasing the dominance of blockchain across various sectors. In addition, you can pinpoint specific themes that drive the demand for blockchain as one of the top tech skills. Furthermore, you can also find out reliable and authentic information about career opportunities with blockchain technology.

Blockchain and the Potential for Growth

In addition, the value of blockchain for the food and agriculture industry amounts to $41.9 million, thereby showcasing the potential of blockchain technology beyond the finance sector. According to the 2020 Global Blockchain Survey of Deloitte, almost 39% of senior executives and practitioners have adopted blockchain into production.

If companies worth more than $100 million in revenue are taken into account, the share of blockchain adoption increases to 41%. Therefore, the potential for growth in the blockchain industry serves as a prominent reason for the increased demand for blockchain skills.

Reasons for the Increasing Demand for Blockchain Skills

So, what exactly does blockchain provide for enterprises that increase their demand? Blockchain is the top tech skill in 2022, with the rising focus on digital transformation. In event of the recent pandemic crisis, businesses had to reform their supply chains and conventional operations. With customers at home, businesses want solutions to reach them where they are. In this case, blockchain can serve the following advantages, thereby proving its necessity as a skill in 2022.

You can clearly notice that the above-mentioned benefits can help many enterprises achieve cost efficiency and performance improvements in the long run. Blockchain technology benefits establish the foundation for its demand among organizations that translates into demand for skilled blockchain professionals.

How Does the Blockchain Job Market Look Now? 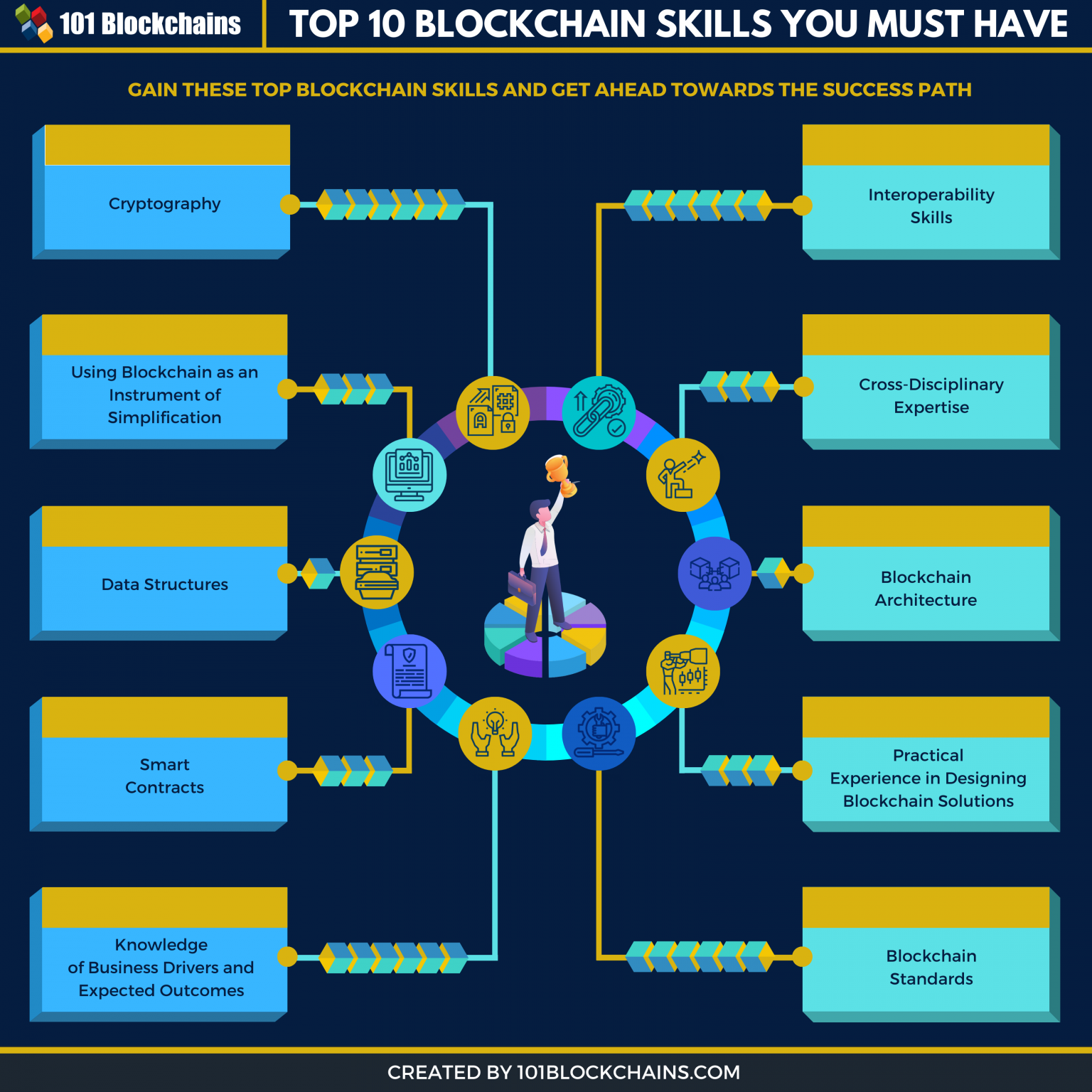 Another crucial theme that has defined the rise in demand for blockchain skill is the application of blockchain in governance. Countries such as the United States, Switzerland, and China have approved the use of blockchain. On the other hand, countries that are gradually catching up with the digital transformation wave also perceive blockchain as a promising platform to develop governance solutions. For example, blockchain-based national identity registration systems are one of the possible prospects for using blockchain to support governance.

It is also essential to reflect on the theme of rising opportunities for the integration of blockchain with other emerging technologies. For example, the IoT network is increasing, and so is the data generated from it. As the IoT data increases in volume, concerns for storage, and processing of IoT data with security, become prominent. Now, blockchain can deliver a promising boost to security, transparency, and speed for developing IoT solutions. So, you can identify clear opportunities for promising career roles with blockchain expertise.

Read Now: How does Blockchain Work?

Aspiring blockchain professionals must have to deviate from conventions for pursuing a career in blockchain. It is a continuously evolving technology and requires you to experiment and innovate. If you are up for the commitment to develop your top blockchain skills, then you can capitalize on the career benefits of the following blockchain-based roles,

One of the foremost roles that have improved the demand for blockchain skills is that of a blockchain developer. Blockchain developer is one of the highest paying job roles and involves the responsibility for designing and developing blockchain-based solutions and apps. You would require excellent server-end programming and analytics skills for exploring this career path.

A Blockchain certification can take your Blockchain career to the next level. Learn now how to become a Certified Expert in Blockchain.

The next important blockchain-based role that has been gaining demand recently is that of a blockchain quality engineer. The primary responsibility in this role would involve addressing the concerns of analyzing the quality and the planning and delivery of blockchain projects. It is also important to ensure that new blockchain infrastructure maintains compliance with pre-defined QA standards.

Blockchain quality engineers also have to write scripts and implement test automation for improving load performance tests. Candidates must ensure that they are fluent in the basics of the blockchain environment and the standards of testing.

So, you can clearly notice the power of blockchain technology, the diversity of job roles, and the potential growth of investment in blockchain from the above discussion. It clearly establishes the basic precedents underlying the rise in demand for blockchain skills. If you want to build your career as a blockchain professional, then choose the job role you want to pursue.

In the next step, you have to find the ideal platforms that can help you obtain the skills and knowledge. You can choose platforms that offer comprehensive industry knowledge along with in-depth expertise in various aspects of blockchain technology and help you gain top blockchain skills.

So, if you are a beginner and about to start your career in technology, Blockchain could be a great choice for you. Learn the basics of Blockchain with the Free Blockchain Fundamentals Course and get ready to have a bright future ahead!

Blockchain Size: Everything You Need To Know