Are you looking for an R3 Corda interview and questions? If you do, then you have come to the right place. There has been a huge demand for blockchain-related jobs. This indirectly means that blockchain technologies like Corda will also be in demand.

The article is aimed at blockchain learners who are trying to prepare themselves for the interview. We will go through a good amount of interview questions on Corda.

Why Corda? Understanding its Demand

It is common for businesses to adopt open source solutions for their business. This gives them the ability to use the solution according to their requirements.

Currently, the Corda ecosystem is strong, with a good amount of developers working to make it more stable and standardized among the industry players. On the Corda platform, developers can create CorDapps. Also, the blockchain platform is known for its privacy-oriented approach and also by reducing costs related to transactions and record-keeping. The end result is streamlined business operations.

Blockchain, right now, is one of the most in-demand job skills in 2020, according to LinkedIn. 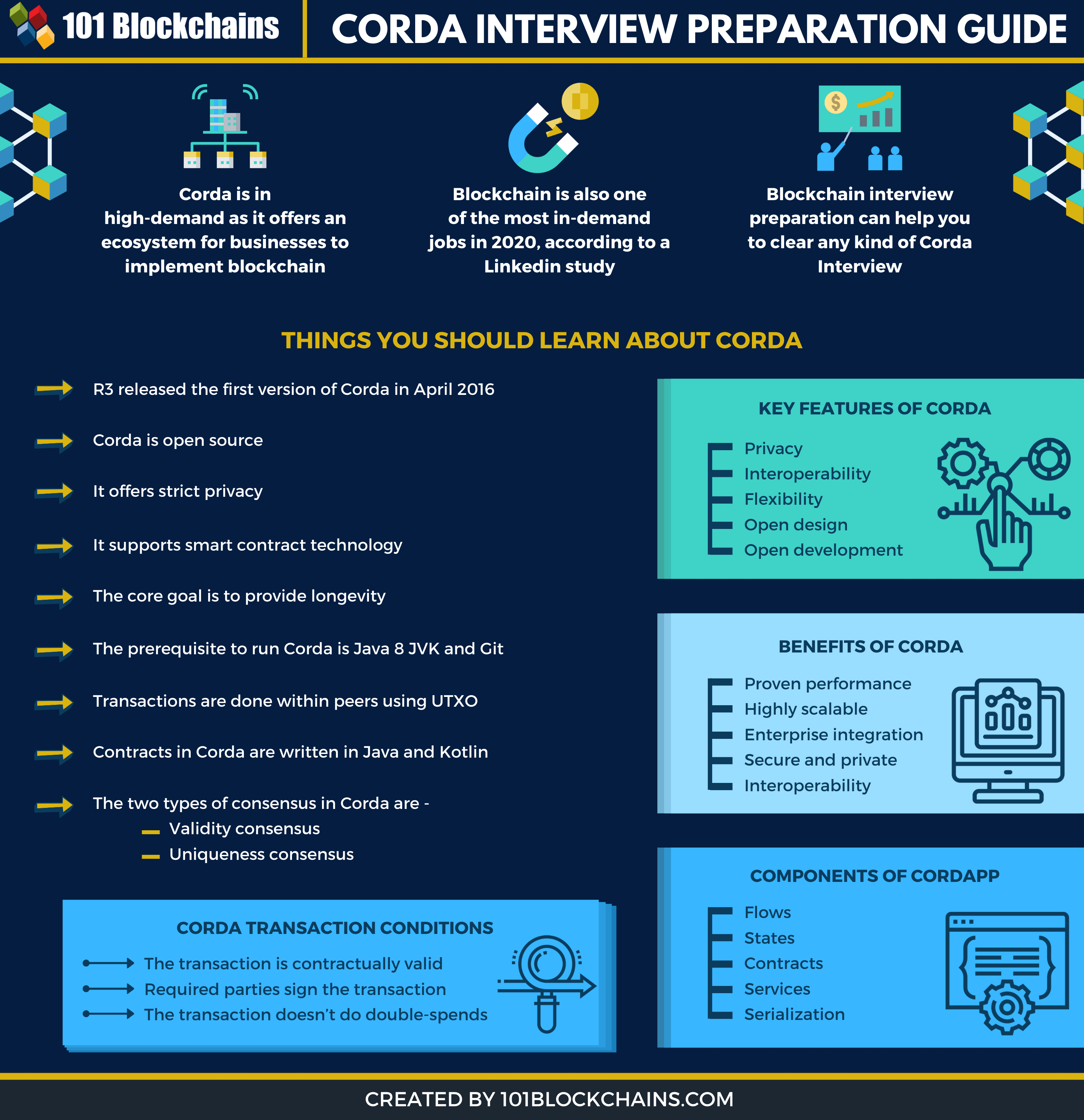 How to Prepare for The Blockchain Interview?

Preparing for the interview is never easy! But, that should not let deter you. You need to make sure that you are strong at the subject fundamentals and have the aptitude and skills to learn about advanced topics.

If you are new to the whole interview process, then you should check out, How To Prepare For A Blockchain Interview. In this article, we have covered all the important things that you will need to prepare for a blockchain-based interview, such as the Corda interview. The only thing that you need to make sure is to modify your learning based on the company you are targeting to crack.

Also, check out Top 50 Blockchain Interview Questions And Answers 2019 as these questions can also help you in your journey to crack the Corda interview.

Roles and their requirements

There are many roles that you can apply for when going for a Corda interview. Most companies do not look specifically for a Corda developer, but someone who has a good skill set when it comes to blockchain.

If you feel that you can take those positions, then check out the tutorial guides below on each one of them.

Let’s get started with the R3 Corda interview questions.

Q: What is Corda?

A: Corda is a popular blockchain project aimed at businesses. It is open-source where businesses can develop, build and maintain an interoperable blockchain network where they can manage strict privacy. Corda shines when it comes to its smart contract technology. It brings direct value to the business as businesses can do direct transactions.

Q: What are the core goals of Corda?

A: Corda is different and it can be understood by the core goals of Corda. They are built for longevity and business. With over 300+ Corda ecosystem participants, it is growing rapidly in the business ecosystem.

A: Yes, Corda is open-source. This means that businesses can use it and customize it according to their own requirements.

Q: What are the features of Corda Blockchain? What makes it so different?

A: Corda comes with plenty of features. For instance, it is open-source, which is a big feature in itself. Other key features include the following.

Q: Tell us about the history of R3 in short.

A: R3 developed Corda and released its first version in April 2016. At that time, it had 200 industry and technology partners. During its initial release, it was not open source. It went open source in November 2016.

Read more about Hyperledger vs Corda R3 vs Ethereum: The Ultimate Guide

Q: Tell us about the Corda Roadmap

A: Corda wants to capture the community feedback and work on it to improve the open-source project. Right now, they have released Corda 4 and are communicating with the members on bringing the important updates to the live version.

Q: What are the benefits of using Corda in Enterprise settings?

A: There are many benefits of using Corda in an enterprise setting. The key benefits include the following:

Corda is different compared to traditional blockchain solutions. It doesn’t try to verify a transaction by connecting with every other peer and then finalizing the transaction. This is why Corda is termed as a distributed ledger technology. It is more of a graph rather than a peer block. The transaction data is mainly shared among the parties with the option of third-party solutions to check the data or transaction when needed. It opens up a lot of scalability problems.

A: The Corda Network Economic Model depends on its network participants including the designers, governances, users related to the business networks. The infrastructure providers and oracle services also participate in the network and are the ones that either need to pay or get paid. The network also supports fiat money digital representation. This gives anyone access to the Corda blockchain with fiat money — but the governing bodies regulate it. To overcome this, Corda needs to support a platform-native asset which can be better regulated and accepted by the regulatory bodies.

A: Public blockchains are big networks where each peer has a role to play. If you take Ethereum and bitcoin into consideration, then you will notice that if a transaction takes place, a large number of nodes need to participate in it for its completion. Even though it is revolutionary, it suffers from drawbacks, including scalability, privacy, and efficiency. This is where Corda comes in and provides a distributed ledger technology that doesn’t rely on informing every peer to carry out a transaction.

Q: How Corda compares to Bitcoin?

A: Corda is similar to Bitcoin in many ways. For instance, both of them offer immutable states that are created and consumed by transactions. Moreover, both of them also have their transactional outputs and inputs. In the case of Bitcoin, the UTXO set is utilized which stands for an unspent transaction output set. In Corda, things are more generalized, but it does support complex data models.

One big difference is how the data stored in single bitcoin transactions. It follows a rigid data format. In contrast, Corda states support arbitrary typed data which is more flexible compared to other formats.

Q: How Corda compares to Ethereum?

A: When it comes to Ethereum, there are many similarities including the ability to run CorDapp code in a powerful virtual machine. Moreover, in both DLTs, non-assembly programming languages can be used to write smart contracts.

The biggest difference is how contracts are implemented in both Ethereum and Corda. In Ethereum, the contracts are basically an instance of the program which is maintained and replicated by participating node. This is very similar to Object-oriented programming. In contrast, Corda treats smart contracts as a set of functions. The main focus is to simply keep the system synchronized using the verify function — stateless and pure function.

A: There are many different enterprise blockchains that are popular including Hyperledger Fabric and Enterprise Ethereum. Each of these enterprise-based solutions is excellent and provides businesses a valid way to utilize distributed ledger technologies. However, their approach or vision is very confined. They are best for building a standalone or independent network that will not work with other distributed ledger technologies. For instance, the assets that are earned on the network will not be used on the other.

Q: What are the prerequisites of running Corda?

A: To get Corda started and to work in a development environment, the developer needs to have the following prerequisite.

Q: What is The Network?

A: The network is a collection of nodes where each node is capable of running the Corda instance along with the CorDapps. In a Corda network, the communication within the node is done as point-to-point. This means that there is no global broadcast in a Corda network. To map the nodes, Corda utilizes a certificate that easily maps the nodes and verifies its network identity. Last, but not the leads the Corda network are permissioned in nature.

Q: What is the Ledger?

A: Ledger in Corda works differently. Here, the ledger depends on the peer’s perspective. For instance, if two peers are communicating with each other, they will see the exact ledger version or the fact that they share between them. This is done to ensure that the network is flexible and scalable. Basically, the ledger is not a single central data store.

Q: What is States?

A: In Corda, the states are the on-ledger facts. The states represent the facts stored on a ledger at a given time. If any information is changed, then the state will also change representing the new information. This means that states are evolved based on the changes. Also, older states are not historical in nature. To store all the historic states, each node has its own Vault where it stores those states.

Q: What are Transactions within Corda?

A: A transaction within the Corda network happens when cash or other information is sent between the peers. Corda just like Bitcoin, utilizes a UTXO, i.e., unspent transaction output. Basically, the process of updating a ledger is done through the proposal.

Q: What are the conditions for a transaction to be completed?

A: A transaction is committed if:

Q: What are contracts within Corda?

A: Contracts are legal codes that are defined according to the parties’ requirements. The contracts in Corda are written using Kotlin and Java. Also, the contracts are executed in a deterministic way so that no double-spending can be done.

Q: What are flows within Corda?

A: Flows are used in Corda to automate the agreeing ledger update process. So, if two nodes are communicating with each other, they will do it through the flow. Also, if flows are built-in, they will be used to automate common tasks.

Q: What are the two types of consensus in Corda?

A: The two types of consensus in Corda include the following.

A: The notaries in the Corda network are present to provide the uniqueness consensus. It is a network service that has few key responsibilities including preventing “double-spends.” To make it functional, the notary clusters contain time-stamping authorities that define the period within which the transaction should be notarized.

Q: What do you know about Vault?

A: A vault is storage where the important node’s owner’s data are stored. It can contain unconsumed states and consumed states. The unconsumed state is the latest state of the Vault whereas the consuming states are historical in nature and have already been consumed during a transaction.

A: Oracle is present within the Corda platform to ensure the transactions are only signed if the facts within it are true.

A: Deterministic JVM is a Java Virtual machine that is deterministic in nature. This is where the transactions are carried out.

Q: What is CorDapps?

A: CorDapps is known as Corda Distribution Applications. They run on the Corda platform. Their goal is to work according to the agreement that is set among nodes so that the ledger can be updated.

Q: How do you components of CorDapp?

A: The components of the CorDapp include Flows, States, Contracts, Services, and Serialization.

Q: What is the format of CorDapp?

A: The format of CorDapp is semi-fat JAR. It contains all the CorDapp’s dependencies.