China's BSN Blockchain: Everything You Need to Know - 101 Blockchains

China’s BSN Blockchain: Everything You Need to Know

The arrival of blockchain technology created new waves of change in the world of information exchange and financial transactions. The use of blockchain in governance applications is also one of the prominent reasons for its rising popularity. However, the existing blockchain technology is similar to the internet in its early stages. With various underlying frameworks and structures alongside the higher cost of application development, deployment and maintenance, the existing blockchain ecosystem needs improvement. The BSN Blockchain has emerged as the foremost solution for creating   a global blockchain infrastructure.

Backed by the Chinese Government, BSN or Blockchain Service Network was launched in April 2020 for general availability. The China BSN blockchain network aims to support SMEs in China for blockchain adoption. Therefore, the interest around BSN has been developing considerably in recent times. The following discussion aims to present a detailed guide on China’s Blockchain Service Network.

Before reflecting on the fundamentals of China BSN blockchain, it is important to understand the factors that went behind its foundation. BSN is the national initiative of China for integrating blockchain projects throughout big businesses, government as well as emerging markets.

BSN was tailored as the backbone for the interconnectivity infrastructure across mainland China, private businesses, city governments and individuals in China as well as abroad. Basically, the founders of BSN Blockchain want to establish a new ‘Digital Silk Road’ for connecting China and the rest of the world. 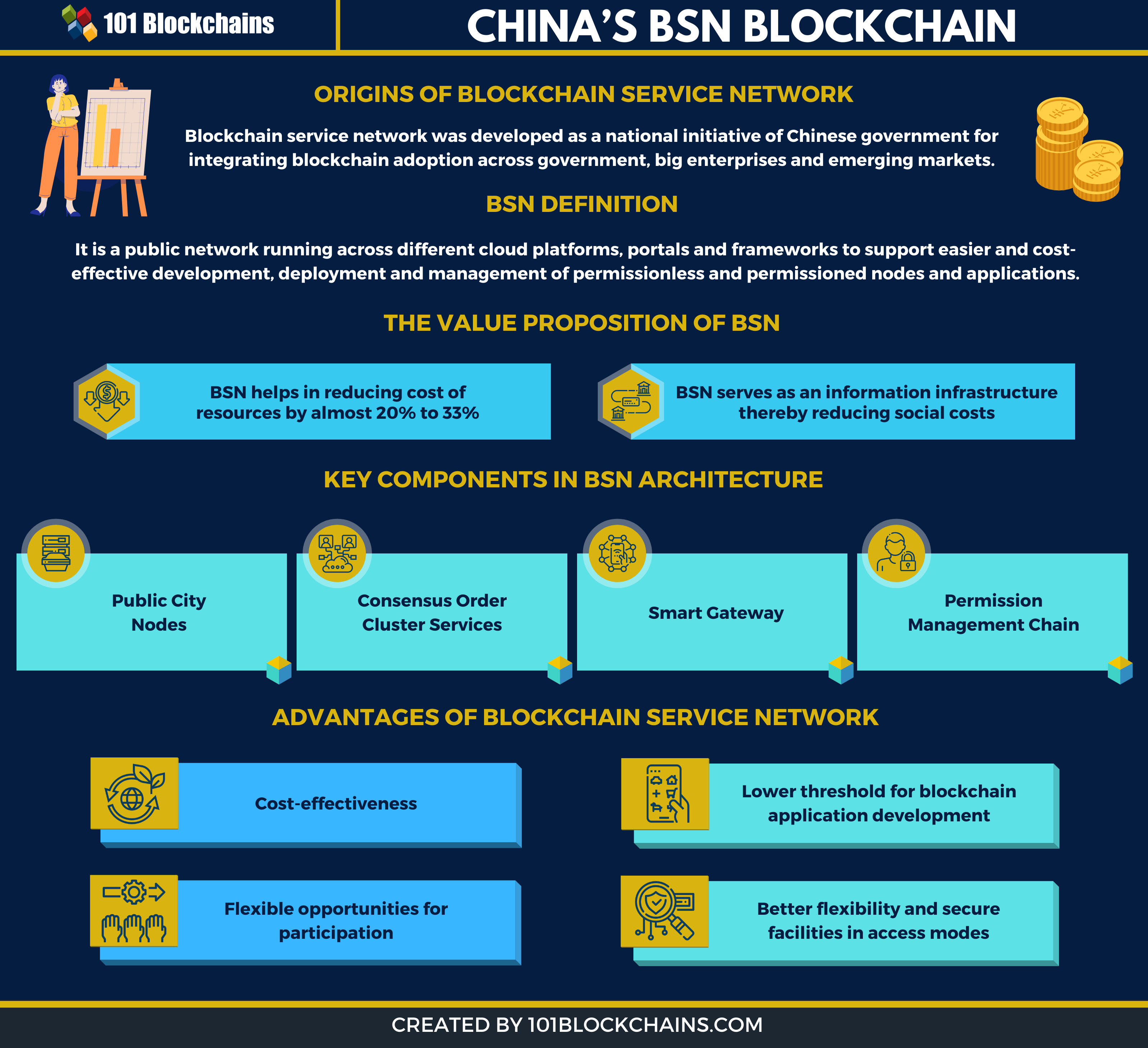 So, basically the BSN Blockchain emerged as potential ‘Internet of Blockchains’. In the simplest terms, BSN is a public network that can run across different cloud platforms, frameworks and portals for enabling easier and cost-effective development, deployment and management of permissionless and permissioned blockchain and applications.

The Value Proposition of BSN

The resource sharing mechanism helps in reducing the cost of resources by almost 20% to 33% of the costs associated with conventional blockchain cloud services. Traditional blockchain applications require creation and maintenance of individual consensus nodes alongside peer nodes.

One could also perceive BSN blockchain as an information infrastructure. The basic notion underlying BSN refers to the sharing of resources offered by public facilities developed by the city. Subsequently, the sharing of resources would lower the social costs. Blockchain application participants and publishers don’t have to purchase other additional physical servers or cloud services for building their own blockchain operating environment with BSN.

On the other hand, publishers and participants could use the uniform public services offered by BSN alongside the facility of leasing shared resources according to their requirements. Therefore, the blockchain application publisher as well as the participants can achieve considerable cost reduction with China BSN Blockchain. The cost-effectiveness factor of BSN is clearly evident in the lower annual costs for developing traditional consortium blockchain network environment.

Working and Architecture of BSN

Now that you have a clear impression of the origins, definition and value proposition of BSN Blockchain, let us reflect on BSN architecture. The main elements in the BSN architecture are public city nodes and the consensus order cluster services. These elements are linked through the internet. Application publishers could select a specific number of city nodes according to business requirements, bandwidth for each node, storage and transactions per second.

Subsequently, they can also allocate rules according to their rights and privileges for setting the application as a consortium or private blockchain. The publisher could also select any combination of city nodes for publishing unlimited applications.

Public city nodes serve as one of the fundamental operational aspects in the Blockchain Service Network. The primary function of public city nodes basically refers to facility of system resources, including access control, computing abilities for blockchain applications, data storage and transaction processing.

Cloud resource or data center providers have ownership of each city node. The owners install public city node software in the cloud resources. After linking to the network, owners could develop a city node in the Blockchain Service Network or BSN.

Depending on the quantity and subsequent need of operational applications, all city nodes could actively deploy desired peer nodes. Furthermore, a load-balancing mechanism helps in allocating high-performance peer nodes to high-concurrency applications such as decentralized finance applications. At the same time, other low-concurrency applications could share a single peer node. The advantage of such a mechanism enables the use of city node resources with maximum efficiency. The mechanism also reduces the overall running costs associated with the Blockchain Service Network.

In terms of principles, the BSN Blockchain is a multi-ledger, multi-ledger system. All applications deployed on specific number of city nodes use dedicated channel for processing transactions, storage and data communication. The complete isolation of channels allows considerable levels of privacy.

If you want to learn more about blockchain technology, make sure to check out our blockchain courses to learn about it.

All the conventional federated blockchain applications need to deploy and maintain individual consensus order node. The consensus order node helps in finding the order of delivery of a transaction that has reached consensus to each peer node and written permanently in the ledger.

The consensus order node is an important component in the BSN Blockchain in its role as data processing hub of an application. BSN consensus order cluster services offers higher performance and concurrency for lowering the cost of operations and deploying blockchain applications. This node uses consensus algorithms to offer all these features in a fairer way.

The experience of China UnionPay in management of high-concurrency transactions is a clear testament of their efficiency. Furthermore, China UnionPay also promotes the development of financial regulations tailored for BSN. It actively advocates the creation of a regulatory mechanism for ensuring compliance of financial applications and transactions on BSN with Chinese rules and regulations.

The permission management chain is also a significant component in the BSN blockchain. It is actually a fundamental, system-level chain that helps in managing relationship between role and permissions configuration of every application.

Applications could define different classifications of application-role-based control management model according to the business characteristics. As a result, the different role participants could have distinct privileges for data processing.

The system can ensure implementation of data processing permission control and audits on the basis of internal ARBAC model of the application. The permission management chain in BSN Blockchain offers the consortium mode and centralized authority mode for organized management.

Stakeholder organizations in an application could participate jointly in the management of the application such as user access and cancellation privileges in the consortium management mode. This is a more efficient way to utilize practical blockchain use cases. The vote and resolution of consortium members is essential for tailoring mechanisms for allocation of participant privileges and rights.

The final component in the architecture of BSN Blockchain, smart gateway helps in forming complex business logic. Blockchain technology involves shared ledgers, encryption algorithms and point-to-point transmission. So, it is difficult for participant organizations to deploy their complex business logic only through application chain code.

In most cases, participating organizations have their own business logic integrated with the chain. The link of their business system with the blockchain chain is helpful for effective integration of BSN with business operations. The smart gateway helps in offering the viable interface for using the BSN network in business operations and strategies.

Here’s a guide to blockchain business strategy which will help you understand how to operate blockchain to develop business models.

The foremost factor that draws attention towards BSN Blockchain is the cost efficiency. Developers don’t have to purchase cloud services individually or software server for developing and maintaining their personal blockchain system.

BSN also offers another promising advantage in the form of lower threshold for blockchain application development. Many developers don’t have comprehensive fluency in blockchain-based programming languages.

Smart gateways as well as pre-built chain code create massive possibilities for developers. The new possibilities can enable developers to use BSN easily and integrate blockchain functionality in conventional business systems and introduce blockchain business models. In the long term, BSN can mimic traditional databases and the internet thereby serving as the basic choice for developers.

As a result, participating in blockchain application becomes a tedious, overly complicated and repetitive process. Users could share the same identification certification alongside accessing unlimited number of applications at all times with BSN. Upon mutual recognition between authorities of applications, users could execute data interactions between chains efficiently.

The most important benefit associated with the BSN blockchain refers to the flexible access modes. Application participants could easily gain access to city nodes nearby through the internet or dedicated line connections for accessing BSN. Majority of consortium blockchain applications are payment-based or finance-related.

On a concluding note, it is clear that the BSN Blockchain is a promising improvement over existing blockchain technology. Someday or the other, blockchain had to evolve into a simpler, accessible and cost-effective variant. BSN has come up with answers to some of the notable concerns with conventional blockchain cloud services.

The improvements in BSN are primarily focused on sharing of resources to achieve cost reduction without sacrificing security and performance.

In addition, the flexibility of BSN will also serve as one of its prominent benefits. Within a year of its launch, BSN has entered into partnerships with notable names in the world of blockchain. Explore our blockchain courses to learn more about blockchain technology right now!