Centralized vs. Decentralized: What Are the Core Differences?

Not so long ago, for a connection to go through, one had to know the connected computer’s telephone number. It is only after a dial-up that, one was to be able to establish a connection with other networks to access data of choice.

At the time, the organization was very chaotic and cumbersome; thus, its limitation to a subset of people. The fact that each computer was independent meant that the network was highly decentralized.

Currently, there are only a few web hosting and server companies tasked with the responsibility of providing internet connection, a development that has significantly eroded decentralization aspect of internet connection as been the case in the early years.

In 1998, for instance, a server that accounted for nearly 90% of all the pagers in the U.S stopped working, triggering one of the most significant internet connection shutdowns in the country History. Should such an incidence reoccur, the repercussion would be severe and felt far and wide.

Centralized vs. decentralized network debate seems to be more pronounced given that almost everything nowadays is dependent on internet connection. So, therefore, we will dive in to investigate the core differences of these two network types.

Centralized vs. Decentralized: The Definitions

What is a Centralized Internet?

There is a centralized point in a centralized Internet network, which can be a server through which all data in a network must pass through, before distribution to various computers or devices.

In the early days, the Internet operated as a standalone network that connected different groups of people and organizations. The fact that such networks’ control was limited to certain groups of people allowed for internet decentralization. That is no longer the case as demand for internet connection has ballooned to levels that earlier decentralized networks would struggle to offer support.

The earlier state whereby information passed through a central point, i.e., server, still exists. Unlike in the past, nowadays there are smaller networks inside bigger networks. The smaller networks can be groups of people or corporations working on unique data sets. 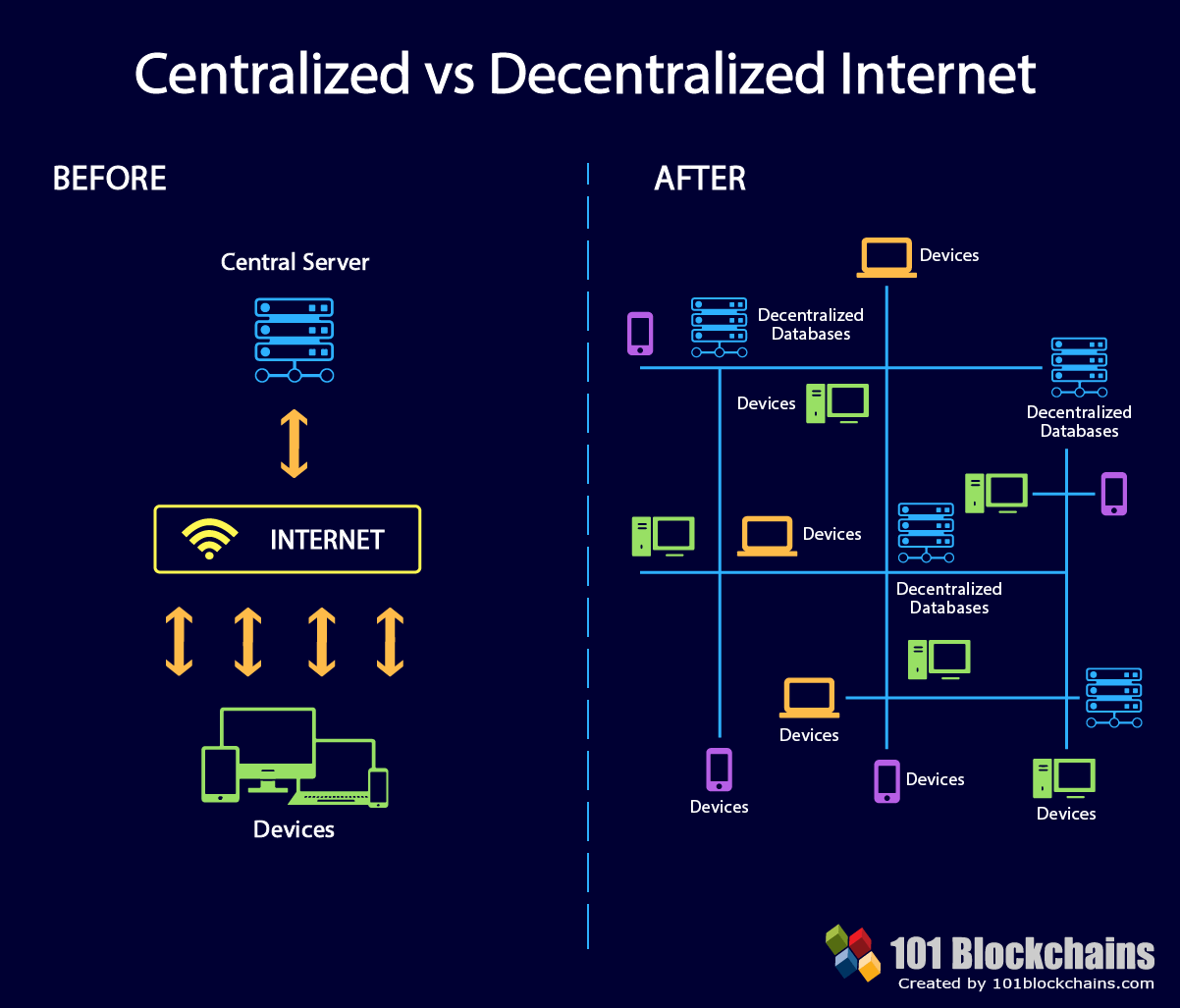 The Evolution of Centralized Internet Connection

In the 1990s and early 2000s, one could post something online without having to rely on one specific company or service provider. While no one owns all the tools used to provide internet connections now, the fact that such resources are still the domain of few multinationals underscores the centralization aspect.

Google and Facebook own a good chunk of the resources that support internet connections, something that most people attribute to cases of privacy issues. It would be wrong to dispute the fact that such companies have invested a great deal in innovative ideas that have made it possible for people to connect to the Internet at high speeds regardless of location.

However, consolidation of power and market share among a subset of companies has brought about a string of challenges that has fueled talk for a decentralized internet connection. The emergence of powerful Internet Service providers has made it harder for others to compete in the space something that people fear could have serious repercussion going forward.

There are undoubtedly multiple benefits or advantages of centralization. They are listed below.

All of these also mean that delegation is easy in the chain. Senior executives can easily delegate work to their subordinates and finalize and finish the work in the best possible way. If work is successfully completed, it creates a level of trust among the workers and chain, improving the confidence required to make it work.

When it comes to a network that utilizes centralization, one central node or a collection of nodes are responsible for transactional verification.

One of the biggest advantages of centralization is the cost associated with it. Any centralized network or infrastructure requires less support and cost. As centralized organizations or networks are pre-planned, the costs associated with it do not cross budgets until and unless it is absolutely required to expand the network.

There is no doubt that centralization organizations or networks enable quick decision implementation. As centralized networks have fewer nodes or people, it requires less communication among the different levels of authorization.

There are also various disadvantages of centralization. Some of them are as below:

Even though centralized organizations are secure and trustable, they are not 100% secure or trustable. The trust is an agreement that is set by the service provider and the user.

However, that’s an agreement, and it can break easily. Big corporations suffer from trust issues from their users, from time to time.

It happens when there is a lapse of security in the system, people tend to ignore the service for some time before the service provider mends the trust by offering solutions and remuneration to those affected.

Centralization also means that the whole network is dependent on a single point of failure. Organizations know about the disadvantage and hence have deployed measures to contain it. However, the fact that there is a chance for failure is a big disadvantage for mission-critical services. So, it creates a massive security problem for the centralized network.

As a single server is used in most cases, it leads to scalability limitations.

What is Decentralized Internet Connection?

Centralized vs. decentralized systems connection standoff comes down to how people can access data online. Centralized internet networks come with servers that act as custodian of data and through which all data passes through.

On the other hand, decentralized internet connection relies on a peer-to-peer network built on a community of users whereby no one single entity is ever in control. In this case, various internet devices act as host of the Internet, rather than a group of powered servers.

Decentralized Internet, takes accessibility of data to another level as there are hundreds if not thousands of nodes through which one can gain access to, to access data.

However, the use of the blockchain-powered decentralized Internet could be the biggest leap in internet evolution, capable of putting to rest, the centralized vs. decentralized systems debate.

When fully implemented, decentralized blockchain network would do away with centralized authorities that call the shots when it comes to connectivity online. Blockchain technology protocol has already proved to have the potential to meet the requirement as it allows transactions to occur across a distributed network without the need for an intermediary to oversee operations.

There are multiple advantages of decentralization.

One of the most significant advantages of decentralization is that the users are in full control of their transactions.

This means that they can start a transaction when they want without the need to authorize it from a centralized authority, in simple terms that the verification process is not dependent on third-parties and a decentralized network utilizes consensus methods to verify the information. There are many decentralized organizations at work at the moment.

Blockchain technology’s data structure is append-only. This means that there is no chance for anyone to modify or alter the data once it is stored. Another blockchain technology utilizes different data models such as Corda, but they also follow the immutability property.

Decentralization also means less censorship. In a centralized system, there are more chances that information can be censored. However, the decentralized network is less prone to censorship, as there is no central authority that controls the data. Let’s take an example to understand the scenario.

In the case of decentralization, peers can interact directly, and hence there is no or less censorship.

Another one of the benefits of blockchain-based networks is that these mostly support open development. This is because of its nature and how it operates. The network gets amazing services, tools, and products built on top of it by having an open development environment.

Linux, for example, is open-source and has an ecosystem that enables anyone to improve on it. The same is true for decentralized networks. In comparison, a centralized network or closed solutions do not get the chance to have open development. This limits development to a great extent.

With a Centralized Internet connection, it is relatively easy to track how data flows from one place to another, given that such information goes through one place, i.e., servers. However, with decentralized Internet that is not possible given that thousands of devices act as nodes for storage of data. In this case, a person can access a given set of information from thousands of locations instead of one central point.

The fact that everything goes through a single point has allowed the likes of Facebook and Google to accrue a substantial amount of data that they use to their own advantage with total disregard to people’s privacy.

Unlike centralized networks, decentralized networks offer a certain degree of privacy that people have come to yearn for in the digital age. The fact that information passes through a variety of points makes it impossible for entities and governments to keep track of what people are doing online.

Decentralized networks are ideal for people who love to keep their privacy as well as protect their identity regardless of what they are doing online.

Centralized internet connections are always at risk of single-point failure, given that data must pass through a given central point before dissemination. Depending on the backup system in place, failure of a server hosting huge troves of data could significantly make it impossible for people to access data at a given time.

Now that almost everything is dependent on the internet connection, a malfunction of servers, carrying important applications or data could wreak havoc on almost every corner of the world. Hack attacks of such installation have become a common phenomenon that has forced ISPs to spend billions of dollars to protect their networks.

However, with Decentralized internet connection failure of one access point would never make it impossible for people to access data in a network. The availability of thousands of nodes through which people can access information reduces the risk of people of being unable to access data regardless of the issue at hand. 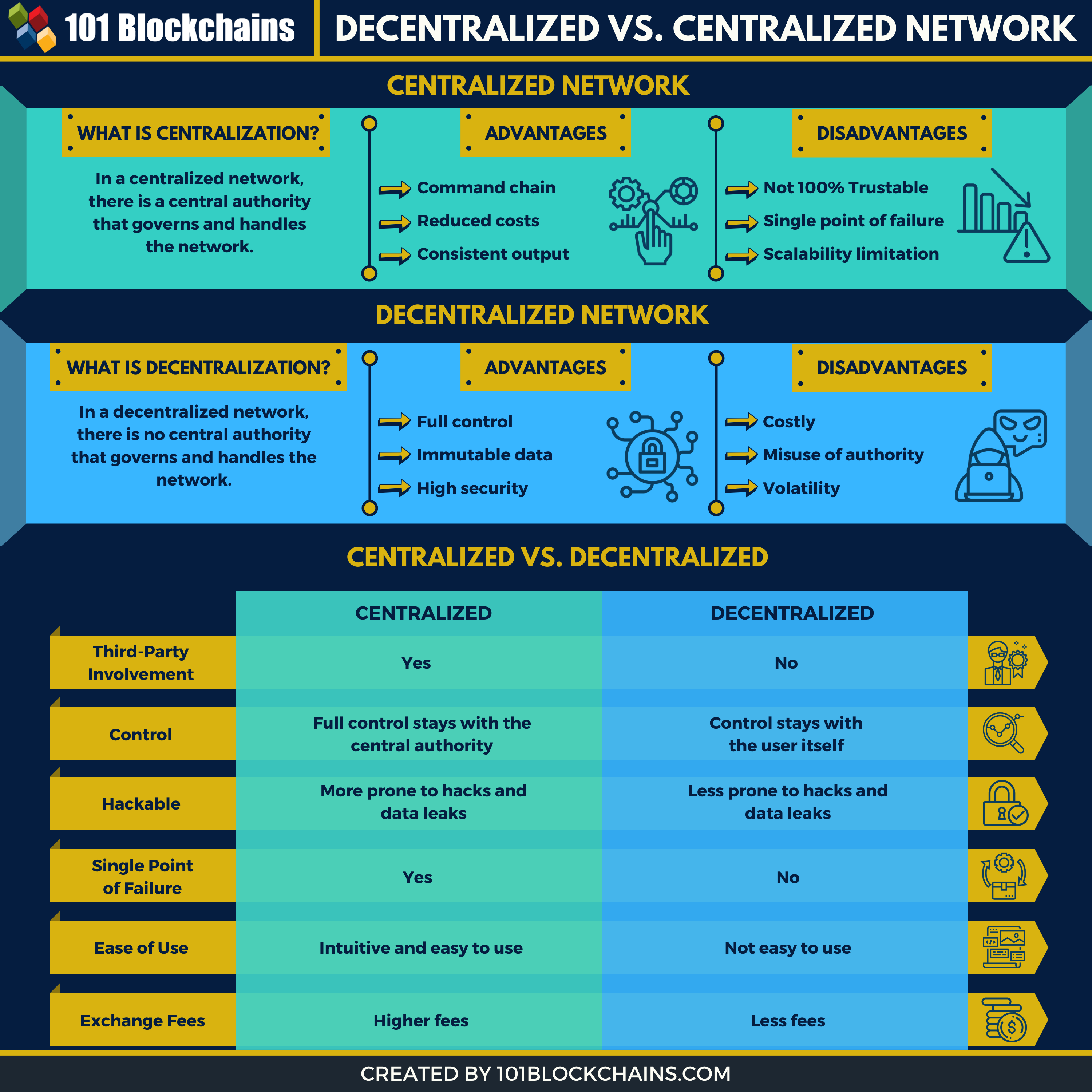 Limited scalability is another headwind that centralized networks contend with as all core applications are contained in single server machines. Addition of more storage as well as bandwidth and processing power must always come into play, to keep up with increased internet connection demand.

With Decentralized networks, the architecture allows the distribution of workloads over multiple computer nodes, instead of concentrating it in one place.

Centralized internet connection has resulted in powerful companies to the disadvantage of end consumers. For instance, internet service providers can regulate internet speeds allowing them to regulate the kind of data and the speed at which people access information.

Internet service providers no longer treat all data the same. Commercialization essentially means those who pay more, enjoy a better connection with fewer restrictions, compared to those who pay less, a development that has brought about the net neutrality standoff.

Decentralized Internet faces some challenges that have stifled cryptocurrencies entry into the mainstream world. Both have the potential to revolutionize the way people live their lives in the near future. The face of stiff opposition and an unending list of hurdles to go mainstream.

Centralized vs. decentralized internet network is a debate that won’t end anytime soon. So, if you want to learn more about them, you can check out our free blockchain course.

Excited to know more about blockchain? Enroll now for blockchain certifications and courses!