Wondering if there is any difference between blockchain or DLT? Here is the answer with blockchain vs distributed ledger technology comparison.

In this era when everyone is talking about decentralization, blockchain, and distributed ledger technology, also known as DLT are the most commonly talked-about technologies. Many people who are unfamiliar with these technologies often use the terms interchangeably.

The lack of proper knowledge about either of these technologies is leading to confusion and withdrawal in public. In this digital age, new technologies can quickly become buzzwords, and as you know, they do not last long. However, blockchain and DLT both are expected to transform the future.

Here is our detailed guide about what is blockchain, and even better, check this ultimate blockchain cheat sheet answering all essential questions about blockchain.

Blockchain technologies, as well as distributed ledgers, are unique in many aspects even though they revolve around decentralization. In fact, this is the primary reason why people often confuse both technologies. However, one thing is for sure that they are and can revolutionize many industries, particularly in the finance world. 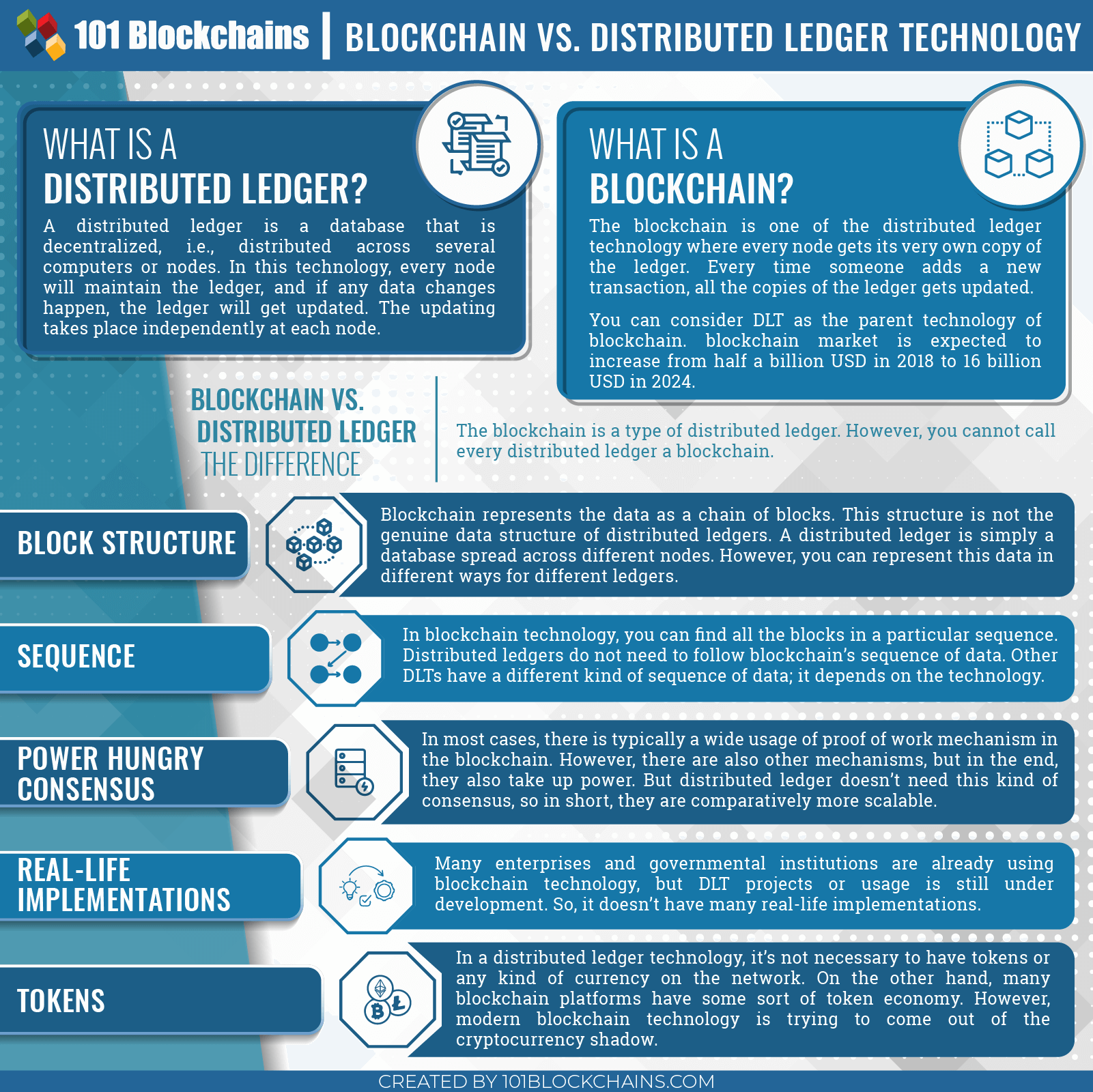 Before we get to blockchain vs distributed ledger technology, let’s look at what each technology really is.

What is a Distributed Ledger?

A distributed ledger is a database that is decentralized, i.e., distributed across several computers or nodes. In this technology. Every node will maintain the ledger, and if any data changes happen, the ledger will get updated. The updating takes place independently at each node.

All the nodes have equal status in terms of authority. There is no central authority or server managing the database, which makes the technology transparent. Every node can update the ledger, and other nodes will verify its existence.

The process is quite easy really. Nodes will try to verify the transaction with the consensus algorithm or voting. However, the voting right or participation of all the nodes will depend on the rules of that ledger. So, sometimes all nodes can participate, in other times, only selected nodes will participate.

Once all nodes give the go signal, the transaction gets a place on the ledger, and all the nodes might receive the updated status. So, what’s the positive side of this technology?

Well, obviously, you’ll be getting a lot of transparency in this technology, won’t you?

However, all the distributed ledger technology provides a great deal of security, as there isn’t any central authority. No single node is a single authority. Nodes will get a chance to perform verification, but that’s about it. So, there’s no point of corruption in this technology.

This makes it an attractive technology for the financial industry or any other industry looking for more transparent technology and those that want to move away from a central authority.

However, many developers are now trying to come out of the blockchain shadow. That’s why people are more than eager to know about the blockchain vs distributed ledger technology differences.

The blockchain is one of the distributed ledger technology where every node gets its very own copy of the ledger. Every time someone adds a new transaction, all the copies of the ledger gets updated. All the transactions are encrypted before getting added to the ledger.

Blockchain does not require a central authority to manage the operations similar to DLT. In fact, it is completely decentralized. There are strict security protocols that require computational trust. The blockchain organizes the data in terms of blocks, hence the name. These blocks are linked with each other and encrypted for security.

Blockchain only allows adding operation, i.e., you can add new data, but you cannot alter or delete existing data. This is one aspect that distinguishes it from traditional databases. As you cannot alter or remove even a single block of data, every transaction exists in history.

This makes it one of the most transparent technologies, especially for the financial industry. It is also one of the reasons why the blockchain market is expected to increase from half a billion USD in 2018 to 2.3 billion USD in 2021. Some predictions even estimate a 16 billion USD market in 2024.

For instance, the Michael Jordan collaboration sneakers with Nike are actually just sneakers, but they are so popular that people now know them as Jordans with their separate identity. That is the case with blockchain exactly as it has gained its own identity.

You can also find differences in how distributed ledger works. For example, in the case of DLT, a consensus is essential. However, in the blockchain, developers can use multiple methods to achieve a consensus that includes Proof of Stake (PoS) and Proof of Work (PoW). You can learn more about both of these methods in our detailed comparison here.

You can also learn more about the difference between the blockchain and database in our blockchain vs database guide.

Another difference between blockchain vs distributed ledger technology is the power-hungry consensus algorithms. In most cases, there is typically a wide usage of proof of work mechanism. However, there are also other mechanisms, but in the end, they also take up power.

But distributed ledger doesn’t need this kind of consensus, so in short, they are comparatively more scalable.

Also Read: Consensus Algorithms: The Root Of The Blockchain Technology

Implementations are a huge factor when it comes to blockchain vs distributed ledger technology. Blockchain happens to be on the lead on this one. Due to Blockchain getting all the attention from the very  start, there are loads of implementations in real life.

Also, many enterprises have taken a liking to the nature of the blockchain and slowly starting to integrate it into their systems. There are also many big giants such as IBM, Amazon, Oracle, Alibaba, and many more offering good Blockchain As A Service solutions.

On the other hand, developers only recently started to go deeper into the core of Distributed ledger Technology itself. There are other variants of DLTs in the tech world. However, there aren’t that many real-life implementations based on simply those distributed ledger technology. But they are under development and will see the light of the day very soon.

That’s why in terms of real-life implementations, blockchain has more popularity than DLT for now. However, the market is slowly going toward the whole concept of distributed ledger technology.

Here comes tokens, another key difference between the two technologies. In a distributed ledger technology, it’s not necessary to have tokens or any kind of currency on the network.

The only time you may find the need to use tokens is when you want to block spamming, and there is a need for anti-spamming detection.

In the blockchain, anyone can run a node. However, running a full node essentially means a huge network which may become difficult to manage. In most cases, there is some sort of token economy.

Although modern blockchain technology is trying to come out of the cryptocurrency shadow.

Token plays a fundamental role in the blockchain technology. Any individual can run a full node, but it is unlikely that they can solve a new block. However, they can still be part of the system by verifying transactions and new blocks.

From an architectural perspective, blockchain is very different. Take, for example, smart contracts which are individual blocks of code. Whenever a transaction occurs in the blockchain network, it creates these smart contracts within the platform’s ecosystem.

A great point to note for blockchain vs distributed ledger technology.

Applications of Blockchain and DLT

It is important to know that DLTs are not a new concept, although they have become popular only recently. The talk about decentralized databases has been around for a long time.

If you look back, it is Bitcoin, the first-ever cryptocurrency in the world that makes blockchain a popular term. Bitcoin was based on the blockchain platform. After that blockchain first established its market with the help of cryptocurrencies. But, over time, developers finally recognized its potential.

Now, blockchain grows independently in other industries as well, other than the financial and crypto industry.

In fact, the current dip in the crypto market, which has suffered the worst year in 2018 due to a huge decline in almost all cryptocurrencies’ value, has little effect on the growth of the blockchain.

You can find many other applications that are currently using distributed ledgers. Some of these include IBM Fabric, R3 Corda, and Digital Asset Holdings. These DLT systems are similar to the blockchain, but that is mainly because blockchain technology is the offspring or subset of distributed ledger technology.

Why Compare Distributed Ledger And Blockchain? Does it Make Sense?

The beauty of blockchain vs distributed ledger technology is that it is open to new ideas and innovation. We only see the start of this technology in practical fields. The Crypto world is regularly producing projects that are quite interesting, to say the least.

Even though blockchain stems from DLT, it is important for the public, developers, and believers of these technologies to be able to make the right distinction. The example of Bitcoin fits best here as it was an open-source project that led to the creation of many similar projects, Ethereum, Lite coin, and more.

Many projects have stuck to the principles of DLTs and ditched the traditional blockchain concepts. These include Hedera Hashgraph, RaiBlocks, Peaq, and NANO.

The DLTs number one advantage and the reason why it is becoming increasingly popular is the decentralization of nodes. It removes the big guy from the scene. It essentially gives the control of the information and the flow to all the users.

Transparency is a big need of the hour in many industries, particularly the banking and finance world. Distributed ledgers offer transparency and can handle billions of transactions relatively faster than the traditional database systems working today. When they cut down on operational problems, the costs of such operations automatically reduce.

Blockchain allowed transparency in the case of cryptocurrency. Each transaction was publicly available. People liked the idea of such a robust system that could not compromise data and transactions were secure.

Another benefit of decentralization is robust security. All the logs of activities and the addition of new data have to pass through tough security checks.

Whether it is money transfer or creation of insurance records, the smart algorithms combined with high-level encryption create a tamper-proof environment.

According to advantages, there’s a huge difference between blockchain vs distributed ledger technology.

Rather than rely on human resources or traditional databases, a distributed ledger does everything faster and in a more reliable fashion. The data cannot be compromised as no single location or entity is controlling it. There are many areas where blockchain can prove instrumental in eliminating problems.

Want to build a career in Blockchain Technology? Enroll in the Blockchain Free Course and start now.

Blockchain differs from DLTs in terms of architecture; however, the idea is the same. These technologies have become so popular because of decentralization. There is a consensus between the decentralization and digital currency enthusiasts that DLT can solve many of the existing problems in the financial industry. So far we can see blockchain as a part of cryptocurrency and making inroads into the financial industry, but it has the potential to affect every industry and revolutionize for the better.

Blockchain is a trending technology and as per reports, Blockchain is the top skill. So, if you are aspiring to start a Blockchain career, you should enroll in the Free Blockchain Course and start your Blockchain journey without any delay.