The origin of Blockchain primarily focused on the creation of a decentralized payment system. So, the world saw cryptocurrency for the first time in 2009, and since then, blockchain technology has come a long way. Presently, the blockchain landscape is nothing short of a large, decentralized supercomputer that provides the perfect platform for developers worldwide to develop their own software applications.

Aspiring to build a career in Blockchain development? Start with the Free Blockchain Fundamentals Course now!

The 2018 Skills Index Report of Upwork, showcased blockchain as one of the fastest-growing skills in terms of demand. Furthermore, a recent report by LinkedIn has placed blockchain among the top tech skills in demand in 2020. Blockchain technology is a continuously evolving space with a massive potential for innovation.

Therefore, the demand for blockchain professionals with expertise in the best blockchain tools would increase substantially in the long-term. There are a variety of career roles to explore in the Blockchain landscape. However, you need to learn about various blockchain developer tools and the skills for implementing them for different use cases. 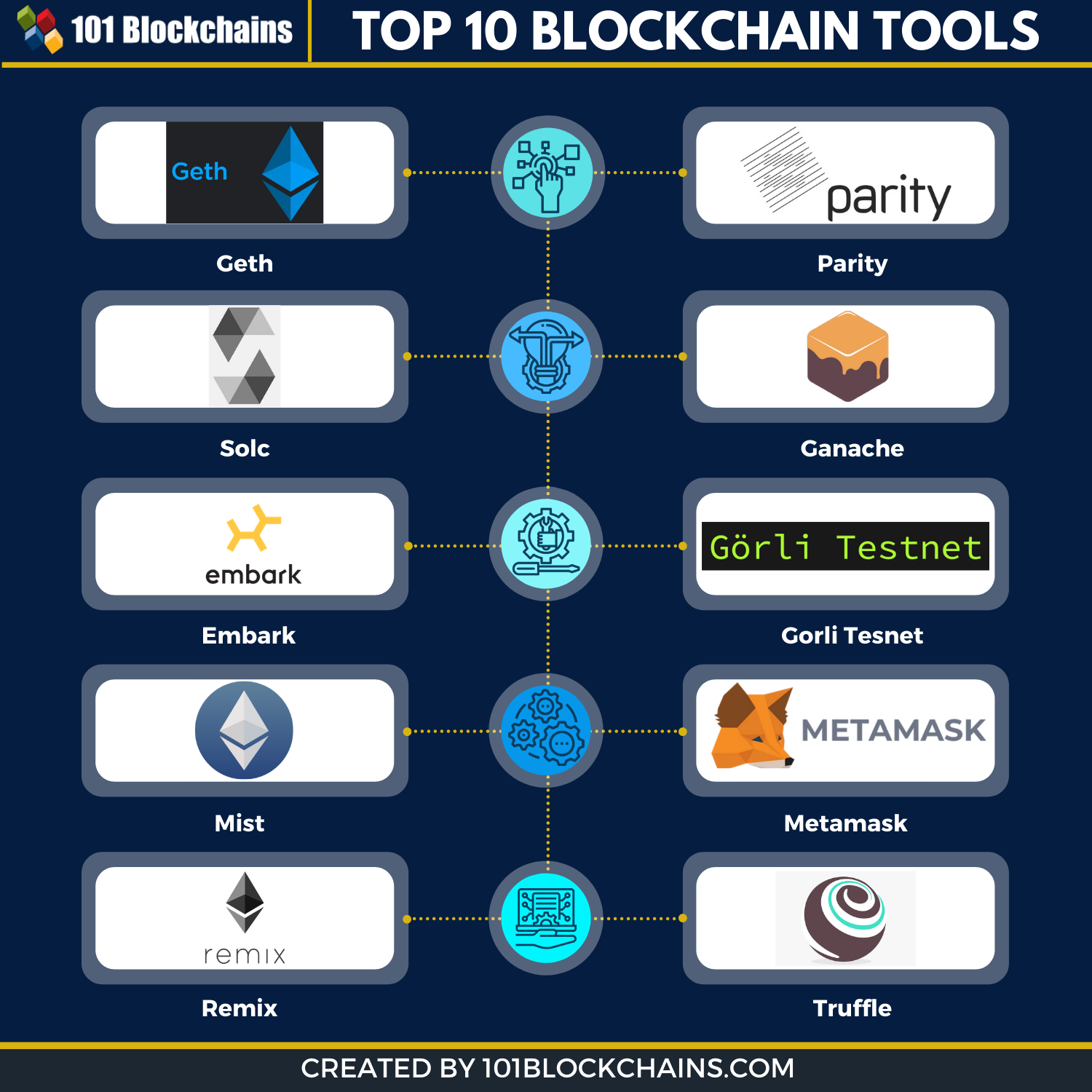 The next important reason to emphasize the significance of blockchain tools refers directly to their contribution to improving knowledge and hands-on experience with blockchain. Most important of all, expertise in using the best tools for blockchain development can enhance your employment potential.

One of the first mentions among the best blockchain tools available currently is Geth. It is basically an Ethereum node implementation based on the Go programming language. You can avail Geth in three different interfaces, such as the interactive console, JSON-RPC server, and the command line. Geth can support blockchain development on Linux, Windows, and Mac operating systems.

It serves as an ideal tool for a wide range of Ethereum Blockchain tasks, including the creation of smart contracts, token transfer, exploring block history, and mining ether tokens. Following the installation of Geth, users can connect to existing blockchain or develop their own. The advantage factor, in this case, is the ability of Geth to simplify things through an automatic connection with the Ethereum main network.

The next top mentions among most used blockchain tools in 2020 is Solidity. It is the most commonly used language for blockchain developers. The primary foundation of Solidity draws inspiration from Python, JavaScript, and C++. The basic objective of designing Solidity was focused on the Ethereum Virtual Machine (EVM). The functionalities of Solidity include statically typed and support for libraries, complex user-defined types, and inheritance.

Solidity is compatible with the OOP paradigm, thereby serving as the best alternative for smart scripting contracts. Solidity enables blockchain developers to create applications with self-enforcing business logic integrated with smart contracts. As a result, blockchain developers can ensure an immutable and authoritative record of transactions in the solution. The applications of Solidity are largely evident in use cases that involve blind auctions, voting, multi-signature wallets, and crowdfunding.

solc is a wonderful tool that will let you compile Solidity tools and implement Solidity based applications. In reality, Ethereum nodes can come with solc. But the solc package is just a standalone module so you can even use this tool offline.

Remix IDE is one of the common names that come among the best blockchain tools for 2020. It is a browser-focused blockchain tool that supports the processes for developing and deploying smart contracts. Remix IDE is based on JavaScript, thereby providing access through any modern browser.

In addition, Remix can also help in addressing the functions of writing smart contracts in Solidity and testing, debugging, and deploying them. Users can also prefer to use Remix locally or through the browser, depending on their preference. Most important of all, Remix provides comprehensive and simple documentation for facilitating seamless connection to Ethereum blockchain by leveraging Metamask.

If you look for Ethereum wallets in the existing market, you are likely to come across the Mist as one of the top alternatives. The striking factor about Mist that brings it among the best blockchain tools is the tag of Ethereum with it. Before using Mist, users should have a designated place for storage of Ether tokens and execution of smart contracts.

Mist supports both the 32 and 64-bit versions of Windows, the 32 and 64-bit versions of Linux and Mac operating systems. Mist presently serves as the ideal choice for the deployment of smart contracts and is also a full node wallet. So, users would have to download the complete Ethereum blockchain that is more than 1TB in size. Furthermore, users have to remember their Mist password always because they can never change it.

One of the notable competitors among the top blockchain tools refers to Truffle. It is an Ethereum blockchain framework tailored for establishing a development environment to facilitate the development of Ethereum-based solutions. Truffle also includes a massive library of custom deployments that support writing new smart contracts and resolve challenges in blockchain development.

In addition, Truffle is also ideal for the development of complex Ethereum decentralized apps. Another prominent functionality of Truffle as a blockchain tool is automated contract testing. Truffle can leverage Mocha and Chai for automated contract testing. Furthermore, Truffle can also help in enabling the development of smart contracts followed by linking them and their compilation and deployment. Most important of all, Truffle also facilitates a configurable build pipeline to ensure the execution of custom build procedures.

Wondering how Blockchain has gained so much popularity in less time? Go through the top Blockchain features and get the answer.

Presently, the adoption of blockchain technology largely revolves around cryptocurrencies. So, wallets are also accounted for as best blockchain tools, and Metamask has some unique functionality beyond that. It serves as a connection between a browser and an Ethereum blockchain.

Metamask also provides a software platform for serving Ether or other ERC-20 assets. At the same time, it also helps you interact with Ethereum decentralized apps. The browser-based functionality delivers a potential boost to ease of use for Metamask. It is important to know that users can link Coinbase and Shapeshift with Metamask for selling and buying ERC20 token and ETH.

Users can also use Metamask for saving keys for ETH & ERC20 tokens. Metamask has the capability of interacting with various Ethereum test networks, thereby making it a suitable wallet for blockchain developers. After the installation of the app in the browser, users can have an in-built Ethereum wallet at their disposal.

Parity is actually a client for Ethereum. This is another popular tool among blockchain developers as it’s a management tool that offers mission-critical usage. Also, parity use Rust programing language. Another great feature of this tool is that it provides an infrastructure that boasts speedy and reliable service.

Anyhow, building your own blockchain network for private use or enterprises or even just for research purposes is super easy. More so say, all of these are customizable.

Users can leverage three different types of Blockchain Testnet, such as public test, private test & Ganache CLI. Testnet serves as an ideal resource for testing decentralized apps for errors and bugs without the need for excessive financial investments. Gorli Testnet is actually one of the popular ones among developers right now.

As a Blockchain tool from the Truffle Suite, Ganache enables Blockchain developers to create their own private Ethereum blockchain for testing dapps, inspecting state, and executing commands with providing full control of the operation of the chain.

The most important characteristic of Ganache is that it enables users to perform all the actions that could be performed on the main chain, without making any payment for the same. Ganache is a very popular Blockchain tool among developers as it provides a number of options such as built-in block explorer and advanced mining controls. Blockchain developers use Ganache for testing their smart contracts during the process of development.

Embark, being a developer framework for Ethereum dapps enables developers to easily perform the development and deployment of the dapps. It also allows users to develop and deploy a serverless html5 application that uses decentralized technologies. One can also create smart contracts using Embark and make them available in the JS code. If the contract is modified, Embark will modify it on its own along with its related dapp.

The migration of smart contracts, redeployment of contracts, and changes can be easily handled in case of multiple contracts. One can use a traditional web development language and any build pipeline to interact with Embark. Embark supports the development of contacts with Javascript on the test-driven basis and thus enables developers to manage their contracts on different blockchains.

Are you a developer interested in building DApps? Go through the detailed DApp development guide that will help you get started at a higher level.

However, a broad range of expertise in blockchain tools can strengthen the foundation of your career as a blockchain developer. It is important for all learners to identify the right tools for specific use cases and showcase efficiency in their professional blockchain-based job roles.

Start exploring the functionalities of blockchain tools with hands-on experience, and you would gradually understand their significance. If you are a newbie, we’d recommend you to start your blockchain career with the Free Blockchain Course. Enroll now and lay the foundation of a bright career!