Now, developers won’t have to worry about the concerns of managing underlying infrastructure, its development, maintenance, and security. However, many users don’t have profound knowledge regarding the use of AWS Hyperledger Fabric blockchain templates. So, the following discussion helps you obtain a clear impression of the different ways to deploy your Hyperledger Fabric blockchain application through AWS blockchain templates.

Importance of AWS in Deploying Blockchains

Amazon Managed Blockchain serves as a fully managed service for developing and managing blockchain networks with desired scalability. It can help in capitalizing on the power of open-source frameworks such as Hyperledger Fabric and Ethereum, thereby indicating parallels with AWS Blockchain Template for Hyperledger Fabric. Amazon Managed Blockchain takes away the additional overhead required for creation of a network. In addition, it also enables automatic scalability for addressing the demands of multiple transactions.

On the other hand, they can also deploy blockchain frameworks directly on EC2 instances that are operational on Docker. The blockchain network deployed with AWS blockchain template for Hyperledger Fabric leverages its personal Amazon Virtual Private Cloud or VPC. The VPC provides assurance of improved granular control across network ACLs, AWS IAM or Identity and Access Management, and VPC subnets.

Also Read:Hyperledger Vs Corda Vs Ethereum: The Ultimate Comparison

The Significance of Hyperledger Fabric

In addition, the AWS Blockchain Template also triggers a Hyperledger Fabric network by leveraging containers on the concerned instance. Another critical component addition in the network refers to one order service and three organizations. The three organizations feature one peer service, each as a unique differentiator. Furthermore, the AWS blockchain template also sets up a Hyperledger Explorer container. 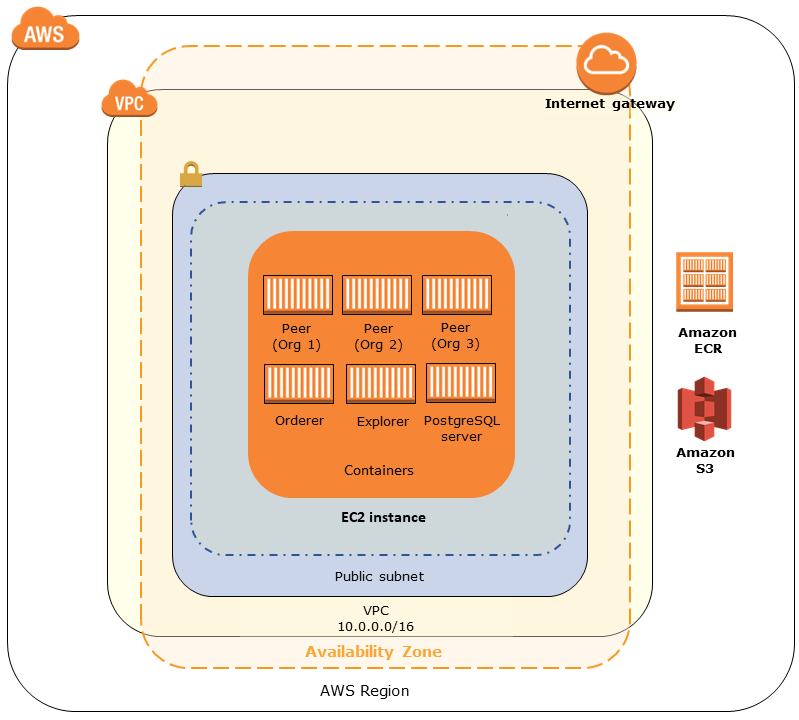 Step 3: Subsequently, the users depending on AWS blockchain templates to run Hyperledger Fabric blockchain applications should create a VPC. The Amazon Virtual Private Cloud service can provide adequate support in this case.

Step 4: Now, you have to develop the key pairs and security groups according to the specifications of your application.

Step 5: Users must also configure the CloudFormation stack for their blockchain application for running the application on cloud.

Step 6: After finalizing the design of the template with all verified components, you can move ahead with the process of deploying the template.

Step 7: In the final step, users can carry out tasks such as installation of smart contracts or chaincode to ensure desired functionality from the blockchain network.

After a detailed overview of the prerequisites to deploy a Hyperledger Fabric blockchain network on AWS, it is important to understand the example IAM permissions. Users could set up specifications for an EC2 instance profile ARN to serve as a parameter in the use of AWS blockchain template for Hyperledger Fabric. The following example policy statement offered on official AWS website serves as a reference for creating the permissions policy related to a concerned EC2 role and instance profile.

If users have a specified public subnet, then they could connect to the EC2 instance easily, just like any other common EC2 instance. On the other hand, if you have set up a private subnet, you can configure and deploy a bastion host on proxy connections to Hyperledger Fabric resources.

It is also important to note that the AWS blockchain template for Hyperledger Fabric assigns a public IP address to the EC2 instance that hosts Hyperledger Fabric services. On the other hand, the IP address is not accessible to the public due to routing policies specified in the private subnet. The routing policies specified by users impose formidable limitations on movement of traffic between public sources and concerned IP address.

In the final stage of the tutorial on getting started with AWS Hyperledger fabric blockchain, the main discussion would focus on proxy connections by leveraging a Bastion Host. As a matter of fact, Hyperledger Fabric services can experience setbacks in public availability. In such cases, users can easily leverage a bastion host for connecting to Hyperledger Fabric resources. The bastion host is basically an EC2 instance, and users have to focus on addressing certain important requirements before running. Here is an outline of the important requirements that you must follow while setting up a bastion host.

The concerned EC2 instance for the specific bastion host must be vested in a public subnet featuring auto-assign public IP functionality alongside an internet gateway.

The bastion host must feature a key pair that enables supports for SSH connections.

The bastion host is related closely with a security group that has the capability to enable inbounded SSH traffic from clients connecting to the host.

Hyperledger is an open-source project for building private blockchain applications for a range of domains. Getting Started with Hyperledger Fabric Course Today!

How to Install Hyperledger Fabric on AWS

How Does Blockchain Use Public Key Cryptography?

An Introduction to Public Key Cryptography