As ultimately blockchain by itself does not fix Human issues of trust, equality and fairness.  Blockchain is simply the latest in a long line of tools Humans developed that can be used to address Human issues. Much like when the internet connected the world, what did it do to solve Human conditions? How have Humans used the world wide web? Have Humans used our existing technology capabilities to address income inequality, food crisis, or any number of the systemic injustices that plague our species? Have Humans been able to come to consensus on how the 4th Industrial Revolution of technology and digital transformation will address the ills of the 3rd Industrial Revolution, most notably climate change?

Blockchain faces many challenges before going mainstream. The greatest of which are all Human. As often, what the most ardent supporters and fanatics of any technology think of as technology challenges aren’t technical in nature.Trust, transparency, fairness, justice, and equity are issued rooted in the Human condition. Yes, they can be solved by consensus. However, the future of Human Consensus isn’t a technological one, its a consensus of the heart, mind and Human spirit. Will blockchain help us achieve consensus isn’t the question we should be asking ourselves. What we should be asking ourselves is, “Can Humanity come together to agree to save itself, from itself?” 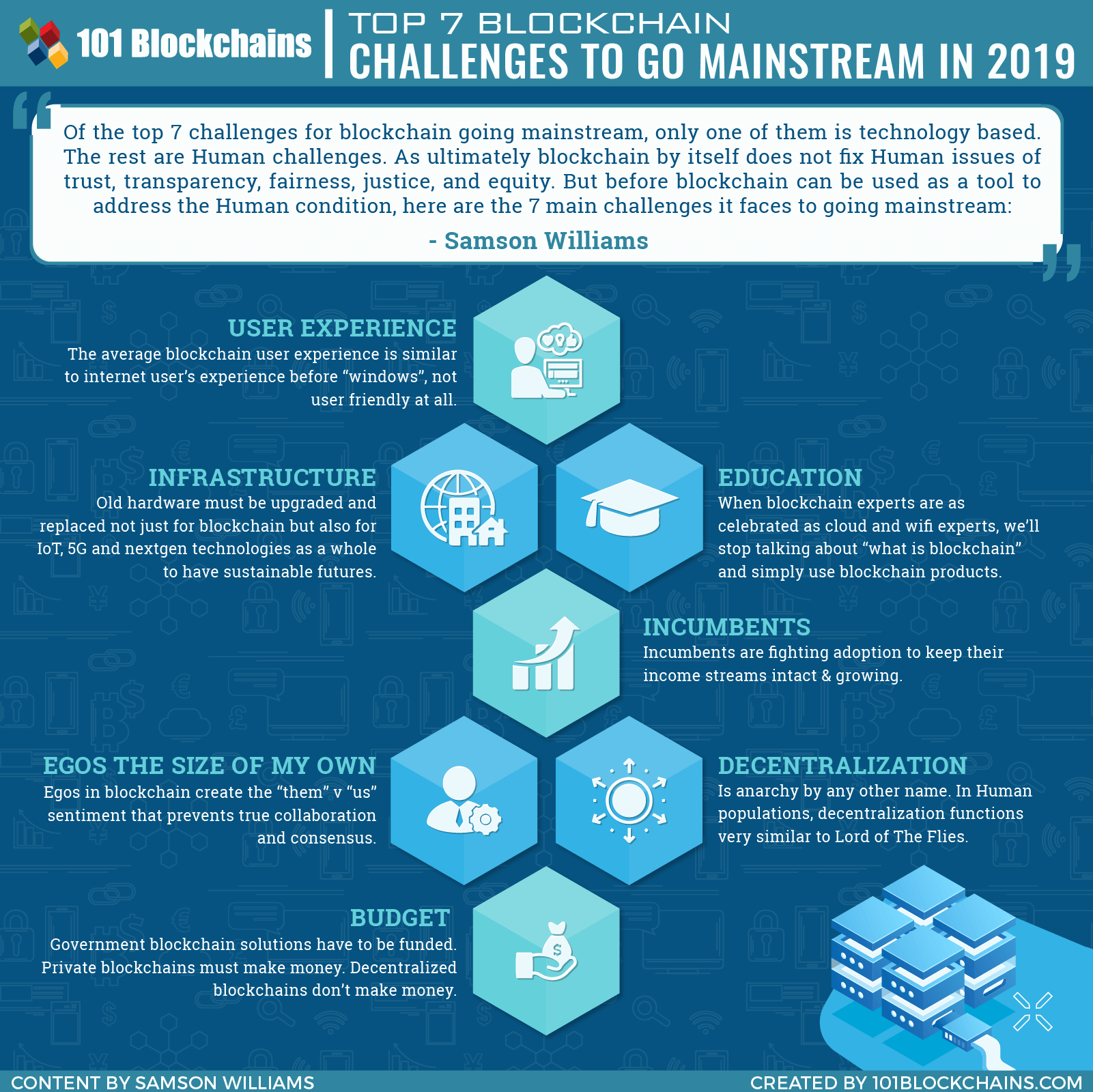 As you ponder the above, along with the future of blockchain, here are the 7 main challenges to blockchain going mainstream:

Budget & Investment – Government blockchain solutions have to be funded. Private blockchains must make money. Decentralized blockchains don’t make money. For blockchain to gain mass adoption, governments around the world must decide to make investing in blockchain a priority. Then, governments must come to some sort of consensus on interoperability of blockchains. Otherwise, blockchains that do not communicate with themselves, that create new silos of information and data will be no better or efficient than current models. The same challenges apply to private/permissioned blockchains. How will private organizations be incentivized to share data, revenue and market cap?

Simple User Experience – The internet, wifi and apps (Whatsapp, Tinder, Google Maps etc…) are simple to understand because everyone can easily use it. Blockchain needs simple, easy to access and use applications. Currently, the average “blockchain user experience” is similar to the internet user experience before GUIs (graphic user interfaces, aka, web-browsers).

Education – Making blockchain as easily accepted and “understood” as wifi. Few people truly know how wifi works but everyone is an expert at using wifi. True blockchain adoption (and education) comes from the ability of consumers to have daily, no thought given, blockchain tools and apps. For instance, when is the last time you thought about how to use wifi? #WhatsTheWifiCode

Infrastructure – old hardware must be upgraded and replaced not just for blockchain but also for IoT, 5G and nextgen technologies as a whole; like voice and neural learning networks (think Alexa and Siri but for everything). This requires substantial investments by public-private-partnerships; which goes contrary to the tenets of decentralization and presents a philosophical debate between innovators and incumbents.

Incumbents – Those who rely on inefficiencies to generate revenue are fighting to keep their revenue streams. This income tribalism is particularly acute in the government, banking and finance verticals. Without the buy in of incumbents, who can be shown, see and adopt the value of blockchain technology, decentralized ledger technology will continue to face an uphill battle for mainstream/enterprise adoption.

Egos the size of my own – The egos in blockchain from evangelist, enthusiast, incumbents and FUDers (Fear Uncertainty & Doubt) make each side deaf. Egos in blockchain create the “them” versus “us” sentiment that prevents true collaboration and consensus. In short, the Tribe of Decentralization will continue to be massacred against the apathy of change, the demands of stockholders for revenue and the normalcy of the Kingdom of Centralization.

Decentralization – In many ways decentralization is a kin to chaos. In Human populations, decentralization functions very similar to Lord of The Flies. Decentralization hyper-incentivizes a winner-take all system. Where early movers and adopters can get in, pump an ecosystem, rending all revenue/value from it and leaving an empty shell game for fast followers and other late stage adopters. This predatory behavior was particularly acute in the Initial Coin Offering (ICO) milieu of 2017/2018.  Due to Human behavior, greed and capitalism decentralization is presently not a sustainable model. Too, decentralizing a thing in no way democratizes access, affordability nor inclusion into that ecosystem. Ultimately, the solution to Human problems isn’t a technical one but a human one. Blockchain doesn’t fix Human issues. It just gives Humans another tool to address the Human conditions of injustice, inequity, artificial scarcity and truth. Will Humans do that? Can we do that in a decentralized manner? History tells us “no” and Human nature agrees.