Confused in differentiating the Solidity, Move, and Clarity smart contract languages. Here are the key differences between Solidity vs Move vs Clarity.

The radically growing adoption of blockchain has been one of the reasons for driving the popularity of smart contracts. Many new blockchain platforms are trying to come up with unique smart contract languages to enable better interaction and coordination among users. Presently, you can find many decentralized applications based on the Ethereum blockchain using Solidity as their primary programming language. So, is it the only option? NO!

As a matter of fact, the Solidity vs Move vs Clarity debate largely reflects on the possibilities of having more than one suitable smart contract programming language for different use cases. The following discussion helps you reflect on the three top programming languages preferred for smart contract creation. However, the striking highlight in the following discussion would be the difference between these three players on the grounds of different factors.

Why Do You Need Solidity, Move, and Clarity?

Before diving into a comparison between Solidity, Move, Clarity, it is important to reflect on their need. Smart contracts are basically software responsible for regulating the exchange of resources or assets, including services and financial transactions. Smart contracts rely on blockchain technology for execution. Blockchain allows mutually untrusted participants to reach agreements regarding a specific state of transaction without the intervention of central authorities.

At the most fundamental level, smart contracts are nothing but code programmed with specific instructions that must be executed upon fulfillment of certain conditions. For example, a smart contract between a lender and borrower would specify the time period of the loan, interest rate, and amount of loan. The smart contract in this example can be configured for termination once the borrower pays back the specified amount of loan along with interest estimated for the given period of time.

Must Read: Mintable Vs Nifty Gateway Vs OpenSea Vs Rarible Comparison

If you want to specify the conditions of the agreement in the smart contract, you would need a programming language with capabilities for the same. Interestingly, you could explore many reliable choices among smart contract programming languages in the present times. On the other hand, the availability of so many choices could create confusion in rounding up on the final choice.

It is an object-oriented, high-level, curly-bracket language with heavy bits of inspiration from other programming languages such as JavaScript, C++, and Python. Solidity could enable developers to script applications that depend on self-enforcing business logic. Most important of all, the design inspiration for Solidity from the JavaScript syntax provides better ease of understanding and implementation of JavaScript for developers.

Some of the notable traits which you could find in Solidity in comparison to other smart contract languages are,

One of the most striking features for Solidity in the comparison between Solidity, Move, and Clarity is the wide range of blockchain platforms that support Solidity. The notable blockchain platforms which support Solidity include Tendermint, Ethereum, ErisDB, Counterparty, and Ethereum Classic. In addition, Solidity also enables support for different data types such as integers, modifiers, Booleans, and string literals.

Solidity offers support for unsigned as well as signed integer domains. Modifiers in Solidity can help in identifying the consistency of conditions before the execution of smart contract code. Boolean data type provides the value ‘0’ in event of a false condition and ‘1’ in event of a true one, according to the accuracy of the given condition. Furthermore, Solidity also allows the representation of string literals in double or single quotes. Apart from support for different data types, Solidity also facilitates operators, hash values, enums, and arrays for developing ‘mappings’.

Mappings are basically a type of data structure tailored for returning the values associated with storage locations. With a syntax similar to other generic programming languages, Solidity also enables support for single as well as multi-dimensional arrays. As one of the popular smart contract programming languages, Solidity is a promising choice for use cases such as voting, crowdfunding, and blind auctions.

Aspiring to know how solidity can help in security? Check out our guide on Solidity Smart Contract Security Best Practices now!

Move programming language offers the basic foundation for the implementation of Diem blockchain. It enables developers for writing programs that could support flexible management and transfer of assets, thereby improving safeguards for concerned assets. Furthermore, the design of the Move programming language has also focused on some essential use cases beyond the domain of blockchain.

A more technical definition for Move would paint it as an executable bytecode language for the implementation of smart contracts and custom transactions. Move programming language offers a significant feature with the ability for defining custom resource types with semantics similar to that in linear logic.

As a result, it is impossible to copy or implicitly discard any resource in Move. On the contrary, resources could only be moved across program storage locations. The type system of Move is responsible for enforcing such safety assurances statically. However, resources are basically ordinary program values despite having special safeguards.

Another significant highlight of Move programming language is the facility of first-class resources. The first-class resources represent a very common concept leveraged by programmers for the implementation of safe digital assets. In addition, they also offer the desired support for writing the correct business logic for enforcing access control policies and wrapping assets.

Move has been tailored as a secure and verified programming language with highly desirable flexibility. However, it is also important to note that Move is also evolving and has the potential to work as the preferred language for other blockchain networks and even some non-blockchain use cases.

Therefore, it is difficult to find support for custom Move modules at the time of launching the Diem Payment Network (DPN). Moreover, it also implies that the design of Move focuses on early Move developers. Early Move developers are basically the ones with a little bit of programming experience with aspirations for understanding the core Move programming language and examples of its use.

Here’s a detailed guide on How To Make A Diem Transfer!

One of the significant traits related to smart contracts points out the need for encoding important business logic on a blockchain. Smart contracts do not need trusted third parties for their execution with complete transparency, security, and verifiability. However, smart contracts are applicable only in the case of special cases, and Clarity serves as a valuable language for introducing smart contract functionality.

The basic definition of Clarity suggests that it is a programming language for creating smart contracts on Stacks 2.0 blockchain. Interestingly, it could also enable support for programmatic control over digital assets. Some of the essential traits in favor of Clarity in the comparison between Solidity, Move, and Clarity include,

The most plausible value advantage with Clarity as a smart contract development language is the aspect of certainty. Clarity offers the benefit of a ‘decidable’ programming language which enables you to know what the program will do from the code itself. Clarity is also Turing-incomplete intentionally by design to avoid concerns of ‘Turing Complexity’. As a result, it can enable a comprehensive static analysis of the whole call graph for a specific smart contract.

In addition, Clarity also supports types and type checkers, thereby eliminating complete groups of bugs such as reentrancy bugs, reads of uninitialized values, and unintended casts. Another crucial advantage of Clarity in the Solidity vs Move vs Clarity comparison refers to the facility of analyzing code in Clarity for determining data usage and runtime costs. As a result, developers could easily predict the functions of a Clarity program alongside its associated costs.

Clarity offers freedom from compiler bugs which can be considerably damaging as the program reaching the blockchain could be vulnerable to errors. With the help of Clarity, you can address these issues, which may have needed contentious hard forks beyond any remedy.

Wondering about what are smart contract oracles? Here we bring a definite guide that will help you understand the basics and advanced concepts of the Smart Contract Oracles.

Differences between Solidity, Move, and Clarity 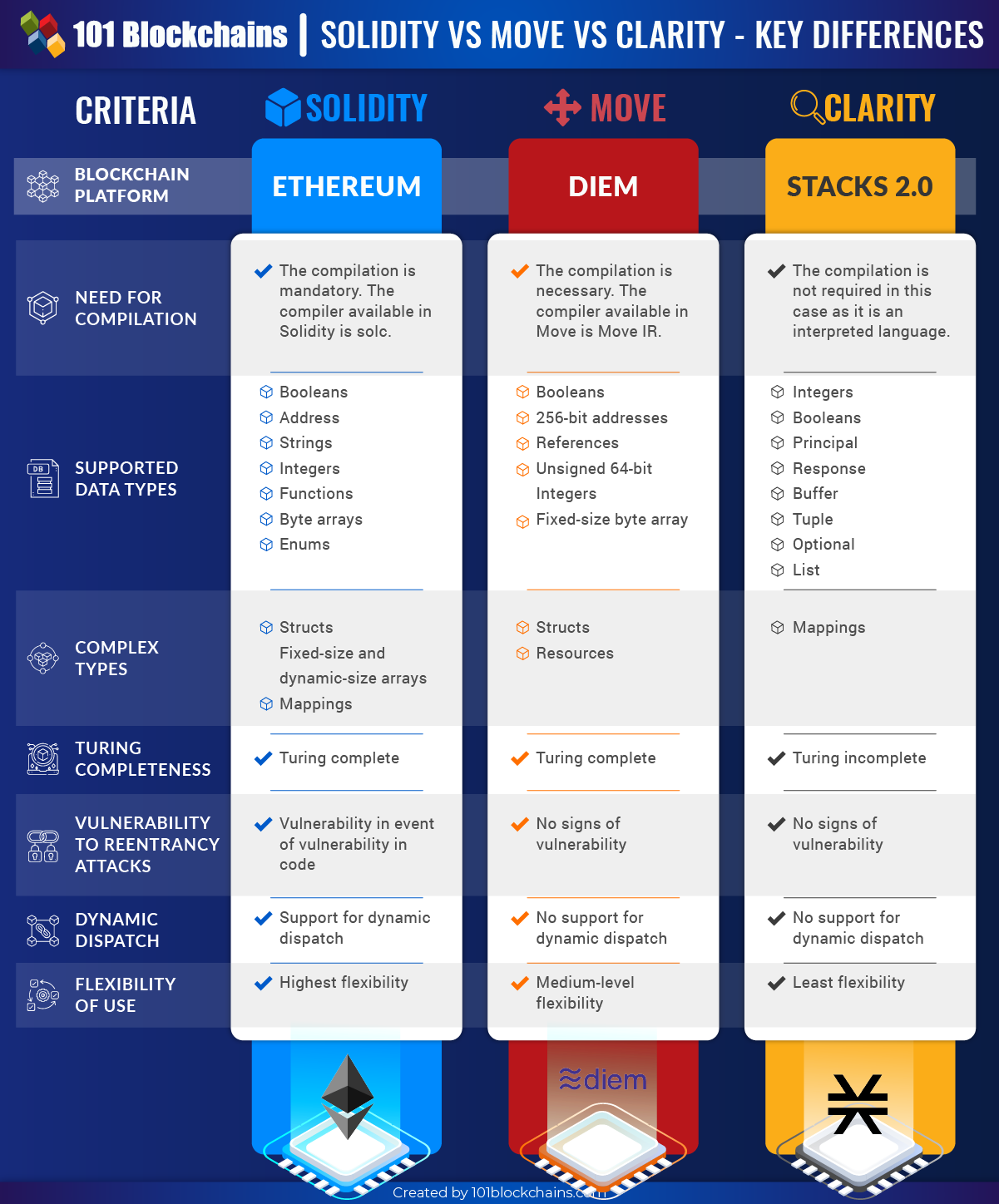 The first aspect in differentiating between Solidity, Move, and Clarity refers to the supported blockchain platforms. In this case, you can point out the blockchain platform for which the programming languages have been developed specifically. Solidity has been tailored for working on the Ethereum blockchain, while Move is the ideal choice for Diem blockchain applications. On the other hand, Clarity is suitable for developing apps with smart contract functionalities on the Stacks 2.0 blockchain.

Once you have written a code, you need to execute it, and a compiler is an essential requirement for the same. The necessity for compilation in the programming languages also provides a basis for Solidity vs Move vs Clarity differences. Solidity and Move are the two languages that require compilation, with Clarity being the odd one out.

The ‘Turing completeness’ of smart contract programming languages is also another important aspect for differentiating between them. It is important to note that Solidity and Move are Turing-complete programming languages. On the other hand, Clarity is intentionally tailored for Turing-incompleteness for avoiding the issues due to ‘Turing complexity’.

Dynamic dispatch is basically the process for the selection of specific implementations of polymorphic operation, i.e., function or method; you should choose to call at run time. It also serves as an important factor for differentiating between the popular smart contract programming languages. Solidity plays the odd one in this case as it includes support for dynamic dispatch. On the other hand, Move and Clarity does not support dynamic dispatch.

The final choice from the Solidity vs Move vs Clarity comparison would be quite confusing for various reasons. For example, apart from their differences, Solidity, Move, and Clarity has their own set of similarities. All three languages are statically typed and include support for Booleans and integers data types. However, the differences between the three popular smart contract development languages show that they have distinct value advantages.

For example, Clarity might not be the most flexible programming language. However, it offers promising safeguards against reentrancy attacks. With Solidity as the top choice for most smart contract development projects, it is important to reflect on other potential alternatives. Learn more about smart contract programming and find a suitable language for the same right now!

Join our membership program and get unlimited, unrestricted access to 101 Blockchains training courses.