The Pros and Cons of a DAO - 101 Blockchains

The Pros and Cons of a DAO

As a matter of fact, their name gives away everything. So, what are the pros and cons of DAO you need to know? After all, DAOs are a completely new term, and you need to understand them from a balanced perspective before making any decision. The following discussion offers you an overview of the benefits and setbacks for DAOs.

The obvious highlight in a discussion on the advantages and disadvantages of DAO would start with the definition of a DAO. Decentralized Autonomous Organizations or DAOs are a new method of creating autonomous, self-managed organizations with a decentralized structure. The operations of the organization depend on a specific set of rules encoded in a smart contract. 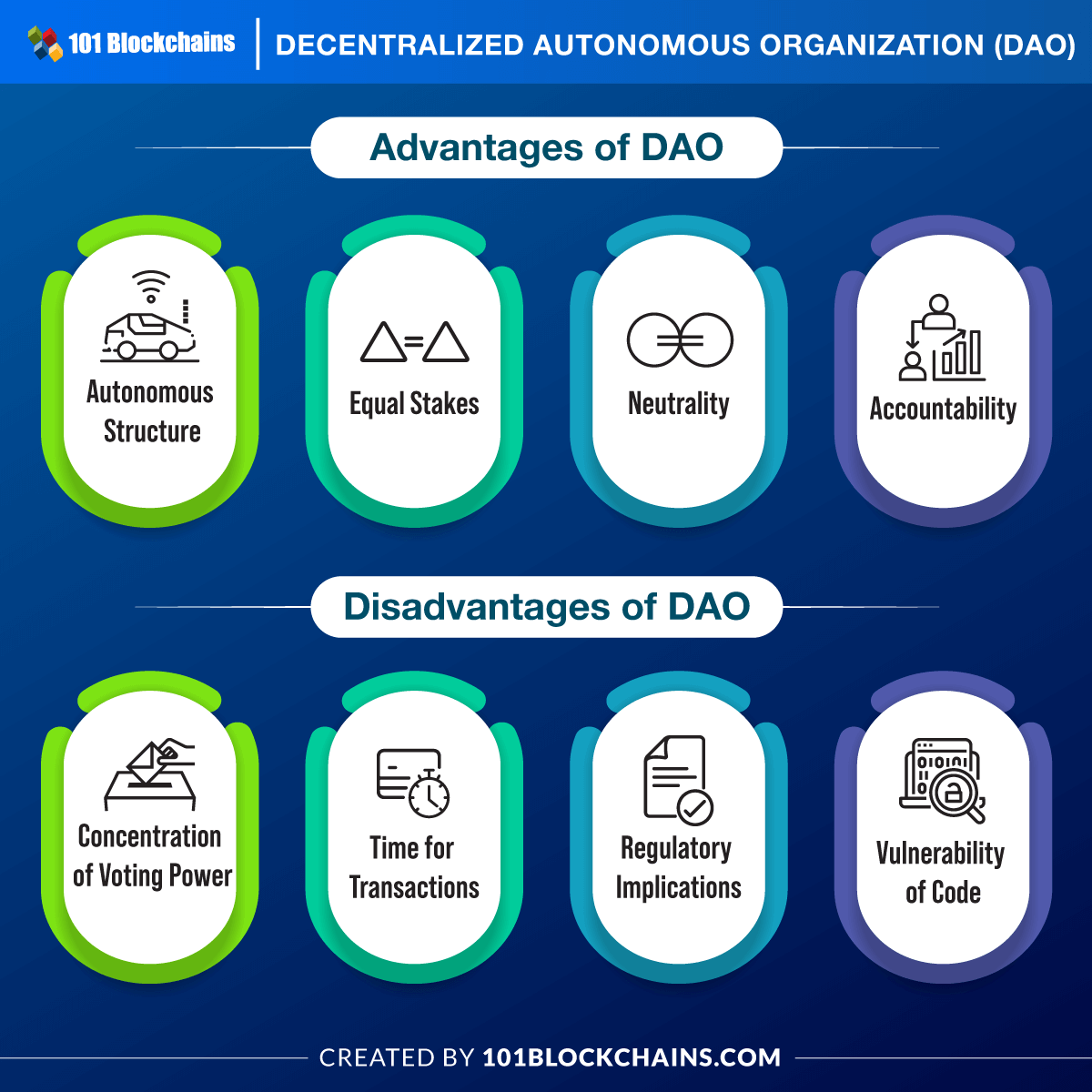 As a result, DAOs remove the need for traditional hierarchies and intermediaries in an organization’s management. DAOs depend on collective organizational decision-making through decentralized governance. Therefore, you can notice some of the advantages of DAO in the definition itself. However, it is also important to wonder about the critical implications of DAOs before drawing out a viable conclusion regarding the same. You can learn more about the basics of DAOs in detail right now with examples and their applications.

If you are new to smart contracts, you might not be sure of its capability. Check the detailed  guide on Smart Contract Use Cases

The best thing about finding the advantages of DAO is that their definition gives most of it away. For example, the autonomous structure of DAOs is the biggest source of advantages. Modern organizations and corporations encounter massive issues in management due to the top-down structure. With the help of an autonomous structure, DAOs ensure that every member of the organization is independent. As a result, it can facilitate the benefits of freedom from centralized intervention.

Most of the troubles and conflicts in modern organizations emerge from regular discrepancies against an established set of rules. The overview of the pros and cons of DAO would obviously focus on the neutral environment it creates for an organization. Without any intermediaries or managers holding significant authority in DAOs, you don’t have to deal with power plays and conflicts. From a technical perspective, a decentralized autonomous organization is all about the smart contract. Now, what do smart contracts have? They are nothing but a set of predefined rules and policies written into code.

After deploying the smart contract, the DAO takes care of implementing the rules without any or little intervention. Therefore, the assurance of predefined actions happening at the right time is a promising value advantage for an organization’s workflow.

The most crucial highlight in the outline of decentralized autonomous organization advantages would obviously refer to accountability. One of the most prominent traits of DAOs is transparency, which calls for accountability of every member of the organization. For example, members must be careful about the design of the new proposals and ideas submitted to the DAO as they come with a cost. Why? Every member of the DAO would have to contribute a certain bit of their resources in evaluating the new proposal. Therefore, members should refine the implausible ideas and proposals to set the right direction for the organization’s future.

The significant highlights of accountability in the advantages of DAO would also point to the use of blockchain technology. Every activity of the organization is documented on the blockchain for eternity, thereby allowing flexibility for tracing back transactions to their origins. Many investors have shown interest in the DAO market, which is clearly evident in the growing popularity of DAO tokens. Transparency offers a credible advantage for reducing the possibilities of new scams in the crypto space, such as rug pulls.

The detailed outline of the advantages and disadvantages of DAO is not complete without a look at the disadvantages. No matter how revolutionary DAOs may look, they have certain limitations. If you are looking for new prospects to adopt decentralized autonomous organizations, then you must also notice their pitfalls. The following list of disadvantages of DAO can help you learn more about the critical implications of DAOs.

Decentralized governance in DAOs relies prominently on the possession of DAO tokens. While DAOs are intended to offer seamless accessibility, a specific group of investors can accumulate major shares of DAO tokens. As a result, they would gain higher voting power on the basis of the number of governance tokens they have.

What if the people with the highest share of governance tokens vote for unreasonable proposals? Does the structure of DAOs eliminate the problem of hierarchy completely? Therefore, the decentralized autonomous organization disadvantages start with the problems due to hierarchy in the DAO’s structure.

The community-based model of DAOs is one of the prominent highlights in discussions surrounding the pros and cons of DAOs. As of now, you must have thought that the community-based model is a positive highlight for DAOs. However, it can turn out to be a massive setback for an organization in case of contingency scenarios. For example, you cannot implement any changes in the DAO without voting mechanisms.

In addition, the voting mechanisms require time, and you might have to wait for quite a sizeable amount of time for every transaction on the DAO. Imagine if the DAO required an immediate modification in the smart contract code to resolve a security vulnerability. Without the consensus of all members of the DAO, it is impossible to employ any changes in the code. As a result, the organization can lose valuable time in resolving the concerns of a security breach.

The outline of various disadvantages of DAO would be incomplete without referring to the regulatory concerns. Decentralized Autonomous Organizations can turn out to be regulatory nightmares, especially due to the lack of any definite rules and regulations for taxation and management of DAOs. The common aspect in advantages and disadvantages of DAO points out the critical implications of decentralized governance.

A community-based model not only imposes the burden of an extended transaction time and voting process but also takes away a bit of accountability. How? Isn’t accountability an important advantage of decentralized autonomous organizations? Well, DAOs don’t have any single entity accountable for all decisions of the organization. Therefore, it is quite difficult to implement any rules and regulations for decentralized autonomous organizations.

Another significant entry among the list of decentralized autonomous organization disadvantages refers to the dependence on smart contract code. Most of the DAOs focus on the idea that the smart contract code would take care of everything. DAOs obviously offered trustless environments, albeit with dependence on the authenticity and validity of the smart contract code. Now, it is important to note that every code is vulnerable, and even DAOs can deploy code with certain vulnerabilities. Therefore, the code driving the DAO can turn out as a huge setback for its growth in the future.

The final impression regarding the pros and cons of DAO suggests that you have to embrace the positive and negative aspects equally. As a matter of fact, most of the disadvantages of DAOs are associated with the advantages of DAO, such as decentralization and transparency. For example, the community-based model has been responsible for limitations on transaction speeds and the time required for passing urgent proposals.

In addition, DAOs also depend on code that does not offer the assurance of complete safety against security threats. On the other hand, DAOs are a massive force in the emerging web3 ecosystem. You can witness many improvements in the design of DAO over the long term in the future. Learn more about DAOs with detailed learning resources.

Join our annual/monthly membership program and get unlimited access to 25+ professional courses and 55+ on-demand webinars.

A Detailed Guide on Crypto Loans

How to Set Up a Binance Smart Chain Wallet