The reputation of cryptocurrency Bitcoin is on the high tide once again after it bounced back in 2020. Following its massive crash in 2018, the expanding value of Bitcoin has sparked the interest of many people once again in this innovative cryptocurrency. As of now, the popularity of Bitcoin and its adoption are increasing at staggeringly faster rates. Therefore, the sudden spike in the popularity of Bitcoin served as one of the good reasons for people to look for the best Bitcoin books.

The general public, enterprise professionals, and financial institutions are eager to learn more about Bitcoin and explore its potential. Most important of all, the top Bitcoin books could serve as a vital introductory guide into the world of Bitcoin. The following discussion helps you discover more about the five top additions among the best books to learn about Bitcoin.

The Necessity for Learning about Bitcoin

One of the foremost questions that come to mind when seeking the most popular Bitcoin books points to why you should learn about Bitcoin. Is it really necessary? The popularity of Bitcoin was at an all-time high in 2017, and it plummeted downward from there. So, what difference will it make in 2021?

Such questions are quite deep-rooted in the minds of people venturing into the world of cryptocurrencies. Well, you can definitely answer the doubts by reflecting on the important factors which drive the popularity of Bitcoin. Rather than considering Bitcoin as just another form of digital currency, it is important to know its true capabilities.

Here are some reasons for which you should learn Bitcoin.

With more and more merchants and enterprises accepting Bitcoin as a viable instrument in their payment methods, it is only reasonable to learn Bitcoin. However, many beginners are generally confused about the starting place for their journey in learning about Bitcoin.

Best Bitcoin Books for Beginners to Learn about Bitcoin

Books offer a direct and tangible source of documentation regarding Bitcoin concepts to help you learn more about them. In addition, books could also help learners explore topics beyond the fundamentals of Bitcoin by diving into practical implications pertaining to Bitcoins. Here is an outline of five top books you can choose for learning more about Bitcoin.

Mastering Bitcoin for Starters by Alan T. Norman is presently one of the most popular Bitcoin books for understanding Bitcoin. It offers a detailed understanding of Bitcoin at different stages. Most importantly, the book reflects on the ways in which Bitcoin revolutionized the world of finance alongside transforming the concept of money altogether.

The author of the book offers a detailed understanding of Bitcoin basics before moving towards more complicated topics. The book not only helps you learn Bitcoin but also the ways for starting Bitcoin investment and accepting Bitcoin payment. In addition, the book also reflects on important topics of ensuring security of Bitcoin along with other crypto-assets.

You can learn about the details of the Bitcoin blockchain alongside principles of Bitcoin mining in the book. Mastering Bitcoin for Starters also includes interesting facts regarding Bitcoin from the author. Readers could also discover some professional tips on making their way through the Bitcoin landscape easily. Any individual who wants a detailed understanding of Bitcoin, as well as clarity for the doubts regarding Bitcoin, could opt for this book. 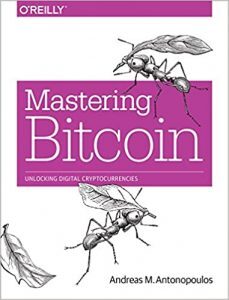 The answer to ‘What’s the best way to learn about Bitcoin’ is more than just a simple introductory guide in some cases. The Mastering Bitcoin: Unlocking Digital Cryptocurrencies by Andreas Antonopoulos is a glaring example of one of the most comprehensive books on Bitcoin for beginners.

As a beginner, you do not have to restrict your Bitcoin learning to specific concepts only. The author of the book, Andreas Antonopoulos, is basically a Bitcoin evangelist and has offered credible insights in his book. The book offers all the required information for mastering Bitcoin alongside a general introduction to the domain of digital currency.

Mastering Bitcoin: Unlocking Digital Cryptocurrencies is one of the most popular Bitcoin books for new learners for various reasons. The author has offered a clear explanation regarding the technical underpinnings of Bitcoin alongside other related concepts.

Some of the notable concepts covered in the book include the lifecycle of Bitcoin transactions and peer-to-peer architecture. Furthermore, you could also reflect on the security principles associated with Bitcoin. The striking highlights of the book include the recent developments in Bitcoin, such as the Lightning Network, Segregated Witness, and payment channels.

3. Early Bird Gets the Bitcoin 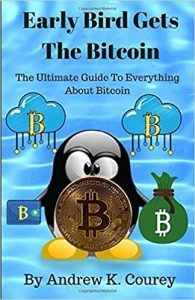 Author Andrew K. Courey has definitely come up with one of the most interesting Bitcoin books for beginners with “Early Bird Gets the Bitcoin.” It is practically one of the best available books for learning about Bitcoin basics. Any individual without prior knowledge of Bitcoin could use the book to gain insights into the basics of Bitcoin.

The author has covered some of the crucial concepts pertaining to Bitcoin, such as blockchain technology, Ethereum, ICO, and cryptocurrencies. Beginners could also develop their understanding of the concepts and practices associated with Bitcoin mining, Bitcoin hacks, and Bitcoin wallets. As a matter of fact, “Early Bird Gets the Bitcoin” offers almost everything you must know about Bitcoin as beginners.

The next striking highlight of ‘Early Bird Gets the Bitcoin’ as one of the best Bitcoin books is the detailed discussion on investment in Bitcoin. Beginners could get an overview of the requirements and best practices for investing in Bitcoin. At the same time, the book also showcases the different details regarding the risks of Bitcoin crashes.

Interestingly, the book also draws the attention of learners towards Ethereum and ICOs or Initial Coin Offerings. You could also find the appendix of the book as a helpful resource for additional learning on Bitcoin. The appendix includes a definition of key terms and some of the notable Bitcoin products and services.

Must Read: Key Difference Between Stablecoin And Bitcoin

4. The Basics of Bitcoins and Blockchains

It is obviously one of the most popular Bitcoin books, especially for beginners, to familiarize themselves with all the fundamentals of Bitcoin and the underlying technology. You can learn about the history of Bitcoin alongside blockchain technology in this book. Most importantly, you can also reflect on the detailed discussion on ways for purchasing, selling, and mining Bitcoins.

The book not only helps you learn Bitcoin but also dive into the way in which blockchain can ensure security. You can learn how blockchain ensures security in Bitcoin transactions and understand the importance of Bitcoin and blockchain comprehensively. 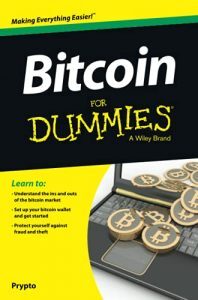 The list of best Bitcoin books would also bring in ‘Bitcoin for Dummies’ by Prypto into the equation. The book is actually one of the first answers for any individual who wants to know ‘What’s the best way to learn about Bitcoin?’ particularly for beginners. You can get a clear explanation of the world of Bitcoin organized carefully to help you familiarize yourself with the intricacies of the Bitcoin landscape.

The book offers an in-depth explanation of the use of peer-to-peer technology in Bitcoin without any central authority. In addition, the book also covers details such as the management of Bitcoin transactions and methods for purchasing Bitcoins.

“Bitcoin for Dummies” is definitely a prolific choice among Bitcoin books for beginners to learn about pros and cons of the Bitcoin market. You could also learn about setting up a Bitcoin wallet and the essentials for beginning your journey in Bitcoin trading.

The best entries among the most popular Bitcoin books, particularly for beginners, provide adequate resources to learn about Bitcoin. Books provide the most reliable and organized source of information regarding Bitcoin and how they work. The emerging popularity of cryptocurrencies such as Bitcoin in recent times has definitely spurred the interest in learning about Bitcoin.

However, the lack of a credible learning resource for Bitcoin could be a huge setback in public awareness regarding Bitcoin. Beginners could use books to learn about Bitcoin, its design, and how blockchain supports Bitcoin transactions. Over the course of time, you can move further and learn the advanced concepts of Bitcoin. Start learning and exploring more about Bitcoin right now with Getting Started with Bitcoin Technology!

Join 101 Blockchains Membership Program and get unrestricted/unlimited access to our training courses and masterclasses.