Although bitcoin was the first digital currency, Diem by Facebook is the most recent entry in the space. Let’s find our the difference between Diem and Bitcon i.e. Diem vs Bitcoin.

Bitcoin came into the world in 2008 and has slowly changed the perception of money. In the present times, Bitcoin has spurred a whole new assortment of cryptocurrencies that serve distinct applications. However, Bitcoin was always criticized on account of its volatility, thereby leading to creation of stablecoins.

At the same time, many other digital currency projects like Diem have also emerged in recent times. Facebook has planned the launch of its digital currency project, Diem, in 2021. Now, it is reasonable to wonder about the difference between Diem and Bitcoin to find out the best pick. On the contrary, it is also important to find out the factors on the basis of which you would differentiate between Diem and Bitcoin.

Many would argue that Bitcoin is an open-source project governed by various developers and network participants. On the other hand, Diem is just a cryptocurrency or digital currency with the backing of a large corporation. So, will Diem overthrow Bitcoin by riding on the power of Facebook? Let us find out the answer by identifying the differences between Diem and Bitcoin in the following discussion.

Want to learn the basic concepts of Bitcoin? Enroll Now: Getting Started with Bitcoin Technology

Before diving into the Diem vs Bitcoin debate, it is important to understand the definitions of both. A detailed understanding of both terms could help you establish the perfect foundation for decoding the differences between them. A detailed understanding of both terms can also provide insights into their potential for transforming the global economic landscape. So, let us start with the definition of Bitcoin.

Bitcoin is generally classified as a cryptocurrency, a digital currency or virtual currency, basically a type of completely virtual money. You can assume Bitcoin as an online variant of paper-based fiat currency or cash. Bitcoin can help in buying products and services.

However, many businesses and countries do not accept Bitcoin as a legal means for financial transactions. The good news is that some companies have started to focus on the growing influence of Bitcoin. Most recently, online payment giant, PayPal, announced that it would enable Bitcoin sales and purchases.

The next important factor about Bitcoin required for understanding the Bitcoin vs Diem difference is its working. Every Bitcoin is actually a computer file. The computer file rests in a ‘digital wallet’, which is basically an app on smartphones or computers.

The second player in the Diem vs Bitcoin debate, i.e. Diem is also a cryptocurrency project. It was initially developed by Facebook as Libra and now is subject to independent control under the Diem Association. Diem has been created solely with the objective of ensuring universal access to financial services. Built on the foundation of blockchain technology, Diem delivers the advantages of reliability, security and scalability.

Interestingly, Diem is also an open technology that allows anyone to build applications on it. The open-source prototype known as Diem Core could help in encouraging global efforts for collaboration to grow Diem. Presently, the Diem Association features some notable names among its members, such as Spotify, Andreessen Horowitz, Shopify and Lyft.

Difference between Diem and Bitcoin – Diem vs Bitcoin

Agencies such as the SEC and FINRA have been quite slow in their regulatory response to Bitcoin. At the same time, investigations related to crypto fraud under FTC also create ambiguities regarding the adoption of cryptocurrency alternatives. Therefore, it is important to ensure that authorities have a clear impression of the difference between Diem and Bitcoin. With a clear impression of the differences between Bitcoin and Diem, it is possible to focus on the larger financial impact of both alternatives.

So, let us take a look at the differences between Diem and Bitcoin on the basis of various themes – 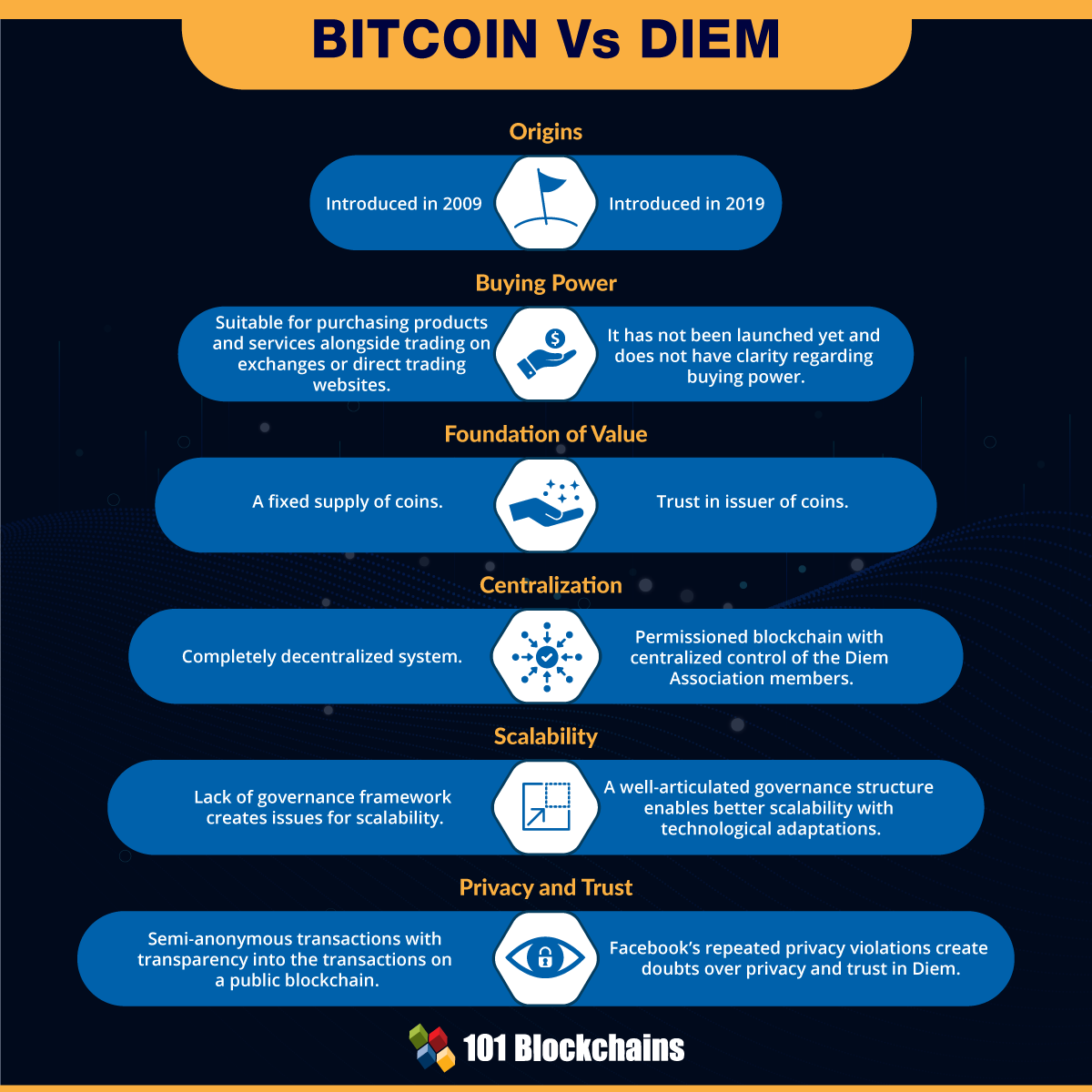 Bitcoin was introduced to the world in 2008 with the release of its whitepaper. The first Bitcoin was mined in 2009. Now, Bitcoin enables buying, selling and trading across various exchanges with millions of individuals all over the world, securely and privately.

Facebook announced the arrival of Diem as the Libra cryptocurrency when Facebook introduced its whitepaper in 2019. However, Facebook has shifted the reins of Diem into the Diem Association after changing its name from Libra. As per recent news reports, Facebook may introduce Diem in 2021 as its first digital currency project.

The concept of Bitcoin has now evolved to central bank digital currencies that can reshape our economy. Here’s a comprehensive guide to Retail and Wholesale CBDCs.

The next important point in the Bitcoin vs Diem comparison refers to the ways in which you can use cryptocurrencies. As of now, there is no existence for Diem because it has not been released officially. However, it could serve as the preferred digital currency for purchasing and trading on Facebook, WhatsApp as well as other properties of Facebook. In addition, members of the Diem Association might also come on board for supporting Diem.

The other player in this comparison, Bitcoin, is available for use to anyone at any location in the world. Interestingly, Bitcoin does not depend on any particular organization or platform. Two people with Bitcoin in their digital wallets could send Bitcoins to each other with someone to validate the transaction with the help of mining.

Bitcoin can support trading on exchanges alongside direct trade websites and exchanging entire wallets. The Diem Association would ultimately exert control over the use of Diem, which is not the case with Bitcoin. Therefore, it can also be suitable for ransomware blackmail as well as purchasing illegal items on the dark web. The lack of a formidable regulatory infrastructure makes it vulnerable to use for illegitimate purposes.

Another common pointer in the Diem vs Bitcoin comparison refers to the scope for centralization. This is where you have to refer to the blockchain perspective. Bitcoin is based on blockchain technology and is completely decentralized, with multiple network nodes working worldwide. Bitcoin runs on a permissionless network which allows anyone with the necessary knowledge and expertise to begin mining. This is a critical issue with Bitcoin as it may take a considerable amount of time for validating transactions.

On the other hand, Diem presents a completely different picture. Although it is based on blockchain technology, Diem uses a permissioned network. So, it is reasonable to consider Diem as a centralized blockchain platform under the governance of the Diem Association. As a result, Diem can ensure faster and scalable transactions. Only the authorized entities are allowed for adding transactions to the ledger, with many of the founding members of Diem being tech and financial organizations.

By economic scarcity, Bitcoin implies working on a particular supply of coins created at the time of its introduction. The pricing of Bitcoin is not related to the conventional financial system in any way. The demand for Bitcoin helps in establishing its price. Subsequently, the verification of unit scarcity on the ledger supports the creation of a fixed supply.

On the other hand, Diem runs on the foundation of trust in issuer. Diem has the backing of a collective of fiat currencies. The collective would always include the same number of coins in the value of the relevant fiat pool. When a particular user exchanges fiat currency for Diem, they will create related assets. Similarly, paying Diem or cashing it out would destroy the tokens or assets.

The concern of scalability also matters significantly in understanding the difference between Diem and Bitcoin. Majority of fintech companies encounter issues of scalability. For example, the Visa network could ensure authorization for almost 65,000 transactions every second. On the contrary, Bitcoin can only support the processing of only a few hundred thousand transactions daily.

It is not impossible to ensure scalability of the Bitcoin network according to desired levels of commercial viability. However, the lack of a governing body creates formidable troubles for increasing scalability. Many attempts at scalability with the Bitcoin network have led to incessant debates and conflicts within the community. The lack of a governing authority has also led to introduction of new offspring currencies such as BitcoinCash and BitcoinGold.

Diem is capable of providing an advantage in terms of scalability in the Bitcoin vs Diem debate. Diem overcomes all the struggles with Bitcoin governance by offering a well-articulated governance structure. The Diem Association could effectively decide on the technical adaptations in a completely organized way.

Bitcoin has always been painted as an anonymous cryptocurrency that you can use for private transactions. However, reality tends to tell a different story. As a matter of fact, Bitcoin is actually semi-anonymous. It does not offer any scope for proving that an individual owns an unrelated wallet or account.

On the other hand, Bitcoin allows for tracking the transactions directly on the public blockchain network. Therefore, people who want additional anonymity and privacy with Bitcoin depend on tumblers for obscuring their activity. In this case, altcoins such as Monero are callable of offering better security for the people concerned about privacy.

The Bitcoin vs Diem comparison in terms of privacy and trust places Diem in uncharted territory. During its initial days, Facebook stated that its subsidiary, Calibra, would help in management of Diem or Libra, as it was known at that time. Facebook also cited that Calibra would not share any user information. However, the ‘Friend Finder’ function proposed with Libra definitely points out some critical privacy concerns. Many concerns over Facebook’s lack of respect for privacy and sanctity of personal data also create doubts about trust and privacy with Diem.

If you are intrigued by blockchain technology, you should enroll in blockchain courses in order to build up your knowledge.

It is quite clear that Diem has some advantages over Bitcoin. On the other hand, it lacks the advantage of time. Diem has not been launched yet, and it has been through a lot, including regulatory setbacks. While being based on blockchain technology, Diem aims at quashing the fundamental theme of blockchain i.e. decentralization.

The control of the network vested in the Diem Association could be biased in favour of the association members. On the other hand, the difference between Diem and Bitcoin also shows the negative side of Bitcoin. It isn’t fast and is not anonymous as everyone assumed it to be. So, it’s all a matter of time before we find out who rules the crypto space- Bitcoin or Diem?