The trade finance industry is on the verge of becoming an obsolete model that works with IT systems, which are aging fast. More so, these systems inject more cost, inefficiencies, and risk to global trade. Thus, it results in bad customer experience, costly client onboarding, and inefficient reconciliation. But how can the scenario change? Enter Contour blockchain.

Project Contour blockchain is a different take on global trade based on the latest technologies available in front of us. As the legacy models aren’t enough now, it’s time for blockchain for enterprise to disrupt this sector as well.

Thus, now we have a Contour blockchain platform to manage our global trading issues for good. So, if you are also curious about this new project, then you’ve come to the right place.

Today, I’ll be sharing an insight into the project Contour blockchain and let you know how it can really benefit the global trading markets. So, let’s begin!

What Is Contour Blockchain Platform?

Contour blockchain is a Corda backed open industry platform for creating, exchanging, approving, and issuing the letter of credit. However, it’s only the first product on the platform. It was formerly known as the Voltron blockchain. But they later rebranded it as Contour Blockchain.

Basically, it’s a consortium with a group of banks and financial companies that led the project. R3 and CryptoBLK are backing up the project with their technological expertise. More so, it uses Corda another blockchain platform as their base technology to power the solution.

They started with twelve participants, and now they have more than 50 corporates and banks using the platform. In reality, the Contour blockchain platform is only available to the customers of the member banks.

So, using this, their customers will get fast service levels, lower rates, financial decisions, and many more.

Additionally, you can also create trade documents in external networks and get them sent, processed, and verified on the network. It can truly change the way a company’s trade at present. More so, project Contour blockchain already tried out the integration of electronic bill of lading from other platforms like EssDOCS and Bolero.

Over the years, Contour blockchain did 25 live successful data transactions and now has many well-known participants for other trade finance services.

Among them, UAE’s ReChainMe completed its first live transaction with the formerly Voltron blockchain in June 2019. 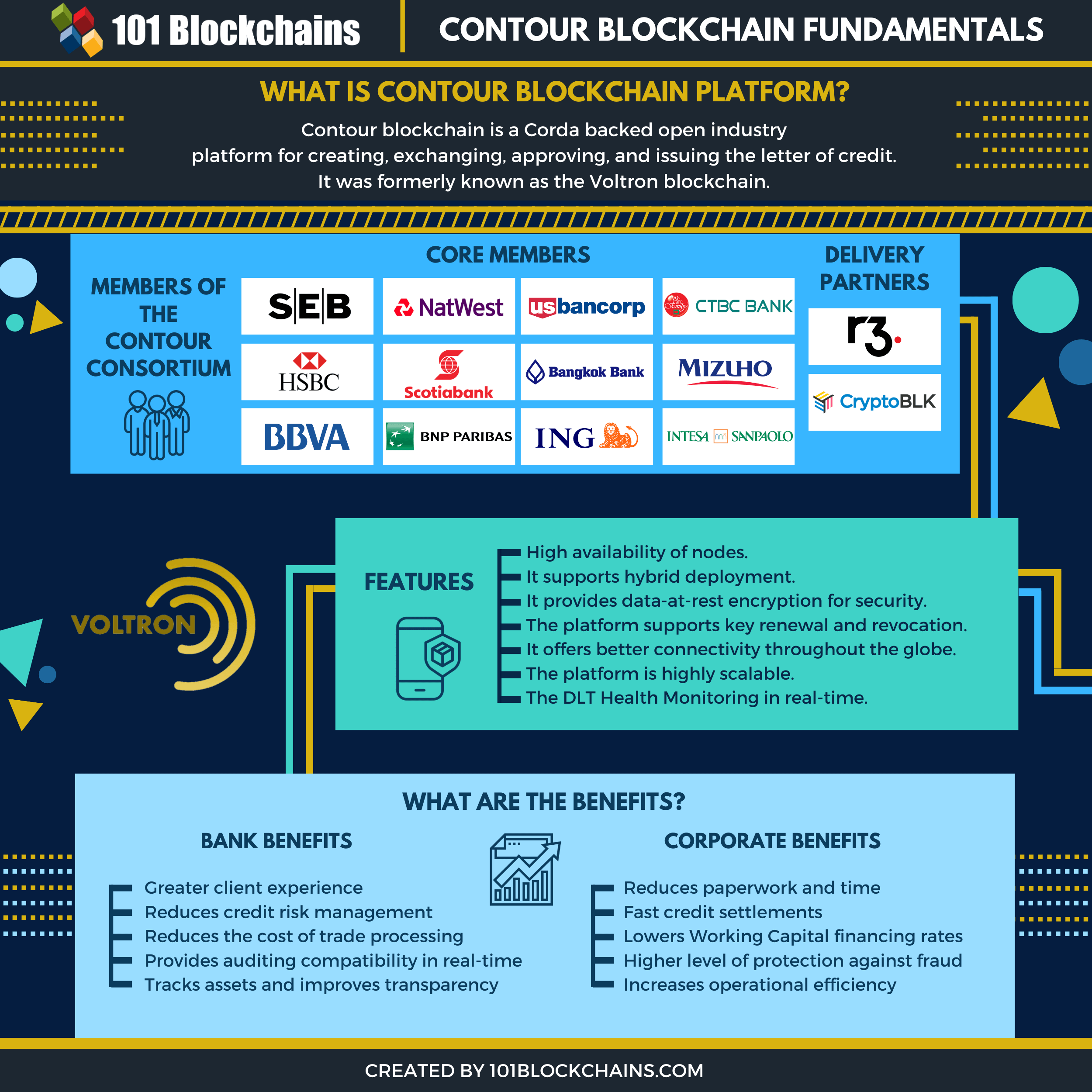 Who are the Members of the Contour Blockchain Consortium?

At present, we only know that there are over 50 participants in the project; however, we still don’t know all of the companies’ names. Anyhow, the initial members of the project Contour blockchain are –

Initially, they first completed their global transaction in April 2018, which was a huge success. After that, in September 2019, HSBC declared that it processed a Yuan-denominated letter of credit on the Contour platform.

Anyhow, later on, they launched their beta network back in December 2019. But they did that, they live tested the Contour blockchain platform in 15 different countries.

In reality, the rebranding did happen fairly recently. At the last, CordaCon in September 2019, they declared that they will commercialize the Voltron blockchain project and rebrand before rolling out.

History of The Contour Blockchain Consortium

In 2016, the Contour blockchain consortium formed with twelve banks backing them up. Initially, their target clients were large importers and exporters, along with banks that deal with a rising number of trade volumes.

Anyhow, they previously planned to set up management for the Contour blockchain consortium in October 2019 and plans to make the platform production-worthy in 2020.

In reality, the delivery partners, member banks, and external investors have the ownership of the platform.

Their very first live data tradition on the platform included Cargill, ING, and HSBC. Additionally, here they issued a digital letter of credit for exported soybeans from Argentina to Malaysia. The best part is that in that live transaction, they managed to reduce the time from 10 days to 24 hours!

Why Is Contour Using Corda?

Contour blockchain is powered by R3‘s enterprise blockchain Corda platform. But why are they using Corda for trade finance? Can it really pull it off? Let’s see some of the benefits of using Corda as the underlying technology.

In the Corda platform, no one can tamper with the ledger. Once data gets an entry into the system, no one can modify it or alter it in any way. So, it’s fully tamper-proof.

All of the information on the ledger goes through the verification process to check whether it’s authentic or not.

Corda does maintain privacy, but it also helps nodes to transact without liquidity issues or creating islands of assets.

In the platform, only the nodes allowed to see certain information can see them. Other nodes that don’t have access to it can’t see the information, thus preserving privacy.

Integrating into the existing banking system is super easy with Corda. More so, you can even use standard language such as Java for coding the contracts.

It comes with a wide range of consensus algorithm. So, you can achieve consensus on every single deal rather than at the system level.

All of the data across multiple ledgers in the system are consistent. So, there would be no issues of mismatching information.

You can also use smart contract features in the system, which will save your time and resources.

Processing of the documents for the Letter of Credit on the blockchain will help to increase the working capital, improve their risk management, digitalize the whole process, and ensure faster settlement.

Creating a network of networks with the help of essDocs, Bolero, and other ecosystems, the platform will become one of the largest networks of corporates, banks, freight forwarders, carriers, and other trade facilitators.

As it’s an open platform, it allows other trade finance solution vendors to offer documents for trade solutions on the Contour business network, which increases scale and flexibility.

Contour blockchain trade finance comes with their own set of missions for their projects. In reality, they have different outcomes for banks and corporates using the platform. Let’s see what these are –

Using the open and decentralized system of Contour blockchain trade finance, banks can easily connect to exporters, importers, and any other trade participants within the ecosystem. More so, their mission is to offer end-to-end trade solutions to get rid of all the issues that today’s trade finance is facing.

Additionally, they plan to expand and serve clients all throughout the globe. So, it won’t matter where your company is. You can easily use their ecosystem for your trade finance.

For corporates, they plan to offer faster transactions is trade, which will increase their efficiencies greatly. More so, they can reduce the risk of multi-bank as well. The Contour blockchain trade finance platform also offers working capital needs and financing for exporters and importers.

How the Technology Works

Basically, a Contour blockchain letter of credit is now available on the network. Although they are planning to expand it to other services. But at the moment, they are offering processing of the letter of credit through the system. So, let’s see what they are doing –

Basically, it comes in two stages –

First, both buyer and seller can create, make edits, and agree to a draft of the Letter of Credit between them.

Next, the banks will advise, issue, and confirm the Letter of Credit on the platform.

After confirmation and agreement from both parties, the real-time tracking process will start.

Here, you can integrate with the essDocs and Bolero’s electronic bill of lading in the system.

One can directly get all the discrepancies highlighted in the system. More so, those errors are fixable as well.

The seller will get all the instructions from the bank, starting from confirmation, acceptance, bills, and loans directly on the Voltron blockchain A.K.A. Contour blockchain.

Features the Platform Doesn’t Have

At present, you still can’t make payments in Contour. So, you have to use SWIFT.

As most of the industry isn’t using the blockchain technology, you have to check some of the documents manually.

The platform doesn’t have any native token or crypto.

What Are the Benefits of The Project?

Basically, both banks and corporates will get their fair share of benefits with the project. Let’s see what they are –

Learn more about how to implement blockchain!

After the live project in 14 different countries, which included more than 50 corporates and banks, it’s moving into commercial launch. According to results, it can execute the whole process of Letter of Credit within 24 hours rather than 10 days!

That’s a milestone for the blockchain technology as well. At present, the venture is setting up in Singapore for the launch, and after that, we’ll get more insight into what the system is capable of.

Want to check out more industries?

Learn how blockchain is affecting healthcare and insurance now!