Blockchain technology introduced new ways for recording, storing, exchanging, and managing data and financial transactions. It works by recording data in a sequential ‘chain’ of ‘blocks’. All the nodes on the blockchain network share a similar copy of the distributed ledger. Interestingly, any changes on the ledger are immediately visible to other network participants. Whenever any agent starts new transactions, the transaction broadcasts throughout the network.

Then, miners carry out the verification and auditing tasks on the basis of a proof-of-work mechanism. However, the need for blockchain oracles emerged profoundly as a solution to critical setbacks in the blockchain itself. Let us find out more about oracles on the blockchain with a brief understanding of smart contracts alongside reflecting on the oracle problem in detail.

The Revolutionary Impact of Blockchain

Blockchain is the most revolutionary technological intervention in the 21st century with interestingly prolific characteristics. Some of the notable traits of blockchain which drive its popularity include decentralization of consensus, geographical independence, immunity to censorship and transparency, immutability, and security.

Many new projects in the domain of blockchain have shown promises of reduced costs alongside better flexibility. On the other hand, private blockchains are gaining recognition as potential alternatives to deal with uncertainties in the market. Irrespective of the type, blockchain finds applications in three prominent areas such as digital currency, social applications and smart contracts.

Blockchain provides the ideal foundation for digital currency by facilitating electronic payments and remittances. The social applications of blockchain are prominently evident in healthcare, voting, and identity management. So, what is the significance of a smart contract as an application of blockchain?

Want to know about blockchain changing the world? Check out our guide on how blockchain can change the world right now!

Decoding the Significance of Smart Contracts

The importance of a smart contract becomes clearly visible through its role in resolving the uncertainty associated with transactions on blockchain platforms. Smart contracts include an outline of a specific collection of promises presented in digital form. A smart contract could include protocols that establish the directions which the parties have to follow for fulfilling their promises.

A smart contract basically facilitates the automatic execution of terms and conditions in an agreement upon compliance with specific conditions. In the case of blockchain technology, a smart contract could be just a self-executing code that helps in the automatic implementation of terms of the agreement in specific transactions between parties when the conditions are addressed. In comparison to traditional contracts, smart contracts do not depend on trusted third parties and also offer deterministic and immutable components.

Smart contracts could offer considerable flexibility for applications in many areas such as,

However, the immutable and deterministic aspects of a smart contract do not imply that it is flawless. The primary pain point in a smart contract in blockchain would be the channel they follow for communicating with the real world i.e. oracles.

Greek mythology presents the first instance of the word ‘oracle’, which implies any individual capable of communicating directly with God. Many ancient stories have mentioned oracles and how people turned to them for obtaining knowledge on certain things beyond their perception.

The blockchain problem basically focuses on reaching consensus, thereby implying the lack of feasibility in offering external information along with transaction data. The other nodes would classify the information as coming from an ‘untrusted’ source. So, it is necessary that the information from the external world should originate from third-party sources whose reliability is unanimously accepted by all nodes.

The most critical problem of blockchain and smart contracts is that they could not access data outside the network or off-chain data. As evident in the case of certain smart contract applications, some contractual agreements require important information from the external world for execution.

This is where you would need an oracle in blockchain. Oracles offer the link between on-chain and off-chain data while serving as significant elements in the blockchain ecosystem. Oracles could widen the scope for applications of smart contracts. Without them, a smart contract could access data only from within the network, thereby limiting functionalities. 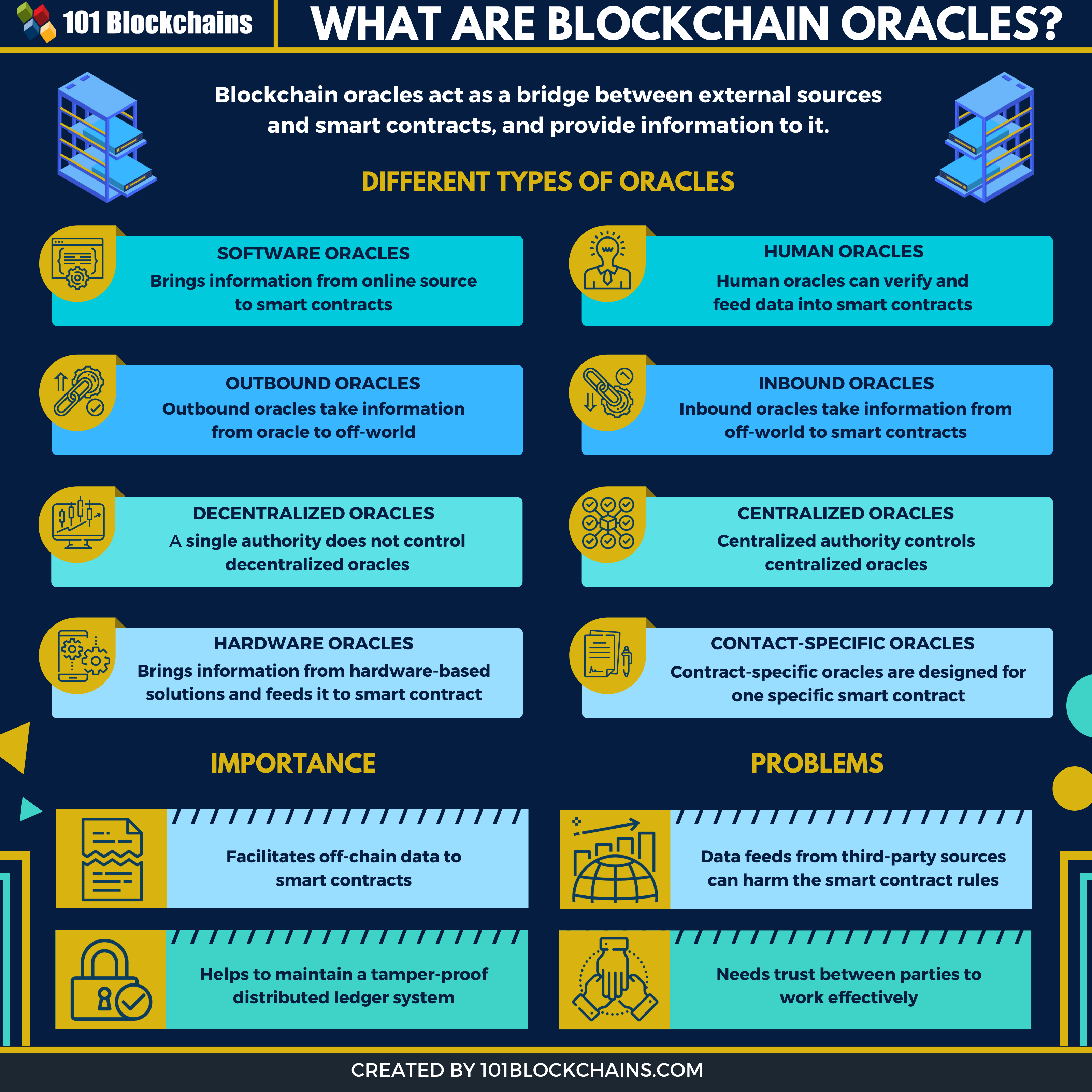 How Does a Blockchain Oracle Work?

Contrary to the common assumptions regarding blockchain oracles, they are no external sources of data. Blockchain oracle actually works as a layer that helps in querying, verification, and authentication of external data sources. Then, the oracle relays the information to the blockchain in a manner that the blockchain could understand. Oracles could transmit data in different forms such as temperature measured by sensors, price information, or details of a successful transaction.

In order to obtain data from external sources, it is important to invoke a smart contract and spend network resources. Furthermore, some oracles also have features of relaying information to smart contracts as well as sending the information back to external sources. The design of a blockchain oracle depends considerably on the use case, thereby validating the presence of different variants. Some of the notable types of blockchain oracle include the following,

The primary foundation for the classification of blockchain oracles rests in three important traits such as,

The ‘source’ trait of a blockchain oracle refers to determining whether the data comes from hardware or software.

The ‘trust’ factor in blockchain oracles would check whether it is decentralized or centralized.

The direction of information quality of a blockchain would refer to whether the information is outbound or inbound.

It is important to note that a specific blockchain oracle could come in multiple categories. However, the use of an oracle in blockchain is responsible for presenting another notable setback.

New to Blockchain Technology? Get started with the Free Blockchain Course now.

The most important thing while thinking of a blockchain oracle is the reason for which we use blockchain. Why are we developing on-chain? Decentralization, of course! On the other hand, data needs to come from some source. If you want to import data from a particular source, node, or API, you basically destroy the complete purpose of blockchain. This establishes the foundation for the blockchain oracle problem.

Centralized oracles would actually imply that a single entity gains control over the smart contract, thereby making it similar to regular contracts. Furthermore, centralized oracles with the best intentions have also been subject to hacking attempts. In addition, they are also vulnerable to concerns of updates and lack of maintenance which can lead to disastrous circumstances.

When you refer to the oracle problem, you will find two important aspects. They are,

As a matter of fact, the blockchain oracle problem is not a new thing in the domain of software testing. As a matter of fact, any entity capable of verifying the appropriate execution of a test application could be known as an ‘Oracle’. The problem with oracles emerges in situations where test oracles are not capable of operating in complete automation.

Without any automation, you would have to depend on an agent for determining the correctness of observed behavior. Human discretion could not provide insights into possible results, thereby leading to the oracle problem in the form of uncertainty in the data offered. The problem has been defined as the conflict of security, trust, and authenticity between third-party oracles and trustless smart contract execution.

Effects of the Problem

One of the initial applications of blockchain was tailored for the registration of intellectual property rights. However, the intellectual property rights protection functionality of blockchain took the back seat to financial applications. Now, the regular operations of smart contract platforms have increased interest in the IPRS function of blockchain. For example, blockchain could offer music artists an independent platform for determining prices, reaching out to their audience, and gain rights for their work autonomously.

However, a smart contract in blockchain could not identify the real authorship of the original productions. The lack of a central authority makes the blockchain a first-come-first-serve platform where artists can claim IPR on the basis of who uploaded it earlier. So, it is difficult whether record labels or the authors should work as the most trustworthy oracle.

Also Read: Blockchain For Real Estate: How This Disrupts The Market

In the case of a supply chain oracle blockchain, the oracle is generally under the company producing the goods. So, you can clearly notice the conflict of interest in this case. Even if the oracle service is outsourced, the producing company controls the information.

Also Check: How Can Blockchain Transform The Supply Chain?

The diverse implementations of blockchain technology in healthcare, especially with many pilot projects, have gained promising levels of attention recently. The integration of blockchain technology could focus on health insurance, medical education, health records, drug supply, and biomedical research. Blockchain could definitely improve security and privacy in the healthcare sector. Blockchain-based healthcare solutions could ensure effective storage and sharing of information securely by leveraging blockchain.

Distributed blockchain oracles could definitely ensure that data uploaded to the blockchain has not experienced any tampering. On the contrary, this holds strong only if the oracle has the same information and the data is easily verifiable with public availability.

In the case of sensitive and private data, like medical records, distributed oracles for processing different information could lead to more chances of data leakage and tampering. You can choose a single oracle that all health institutions could access by leveraging legacy databases. On the other hand, blending off-chain and on-chain data could disregard the basic objective of introducing blockchain in healthcare.

The use of smart contracts invited calls for regulation, with the first attempt made in Arizona. However, the concept of ‘uncensored truth’ is not completely absolute, as you could have immutability only when the system runs well. On the other hand, it is difficult to prove the integrity of information in the ledger.

The presence of oracles is an inherent problem in a smart contract that depends on data from external sources. At the same time, services offering blockchain oracles do not provide the guarantee of impartiality of the oracle. Furthermore, they do not offer any assurance regarding the integrity of information offered by them.

While the use of oracle blockchain would improve the capabilities for accessing external data, it leads to many setbacks. The oracle problem points out one of the notable deviations from the basic nature of blockchain and smart contracts. In long run, the blockchain oracle problem should go through comprehensive research for enabling the identification of effective solutions.

What matters now is that blockchain is gaining recognition as a viable technological intervention across different sectors. Will it be possible to empower blockchain-based applications with external information while safeguarding decentralization? Learn more about oracles in blockchain and find out the possibilities for solving their inherent problem.

Tips To Start a Successful Career in the NFT Space

How to Become a DeFi Expert?