When Was Blockchain Invented? An In-depth Look - 101 Blockchains

When Was Blockchain Invented? An In-depth Look

Have you ever wondered when was blockchain invented? If you do, then you have come to the right place.

Blockchain, even though it is a new technology, has a rich origin and history. That’s why, in this article, we will explore our blockchain origins in detail.

If you are keen on learning about blockchain, then it is always a good idea to know its history as it will teach you the need for the blockchain technology and how it fits in the current market demands.

Blockchain is a peer-to-peer network where peers can communicate and do transactions with each other without the need for a centralized entity. To make the network self-sustained, each peer will have a copy of the ledger and there will also be a consensus algorithm that will take care of validating and storing transactions in blocks that are part of the “block-chain.”

So, if you want to send money to another person using a blockchain network, then you do not need to register for any service.

The transaction becomes immutable once the block is added to the chain.

There are many benefits of blockchain, including:

If you want to know more about the blockchain and understand it from both beginners and technical perspectives, then check out Blockchain For Beginners: Getting Started Guide. 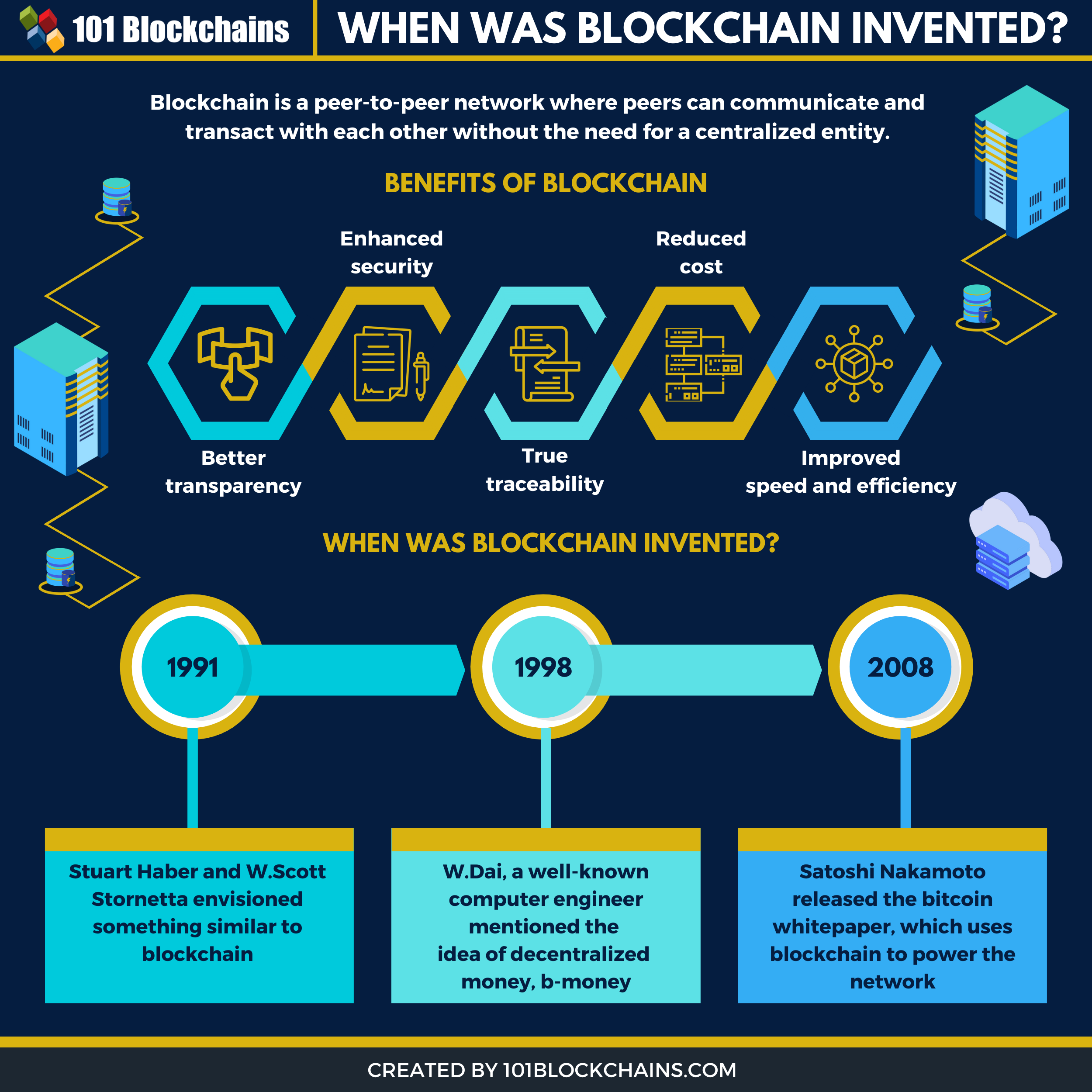 Our work thrives on centralization. Almost every social media app you open on your computer is controlled by a company or a group of companies that provide the service in lieu of your data, even when they deny that they do not use your data for monetary benefits. If you close your computer screen off and go to your bank, then also you will find centralization at the core of almost every function.

And, why not? Centralization has been quite successful when it comes to globalization. The 21st century has brought together a plethora of inventions empowering businesses to globalize their market and take advantage of international treaties and collaboration that enables every business to be at the same level playing field.

The word centralization was first used in France in 1794. In 1820, the “decentralization” word was used for the first time.

In English, the centralization word came into existence in the 1800s.

With centralization capturing a strong foothold on how the world worked, it was only time when people started to realize that there is a need for decentralization as well. In the early 20th century, American people responded negatively towards centralization; they blamed large-scale industrial production for destroying the small or medium scaled businesses.

There are multiple approaches to decentralization which are more akin to distributed nature.

Soon, a lot of new projects started to surface that tried to solve the decentralization problem. Some of the projects include FreedomBox, Namecoin, ArkOS, and so on! All of these project’s focus was to make the internet more decentralized with time.

E.F.Schumacher in his book, “Small is Beautiful: A Study of Economics As If People Mattered.”  used another term known as “appropriate technology.”  The term emphasized heavily on technologies that are small-scale yet energy-efficient and decentralized.

All of these lead to Blockchain technology.

The idea of blockchain is not new. Stuart Haber and W.Scott Stornetta in 1991 also envisioned something similar to blockchain. They create their first cryptographically secure chains of blocks with timestamps so that no one can tamper them.

In the very next year, Haber, Stornetta, and Bayer used Merkle trees to further refine the design. It improved the efficiency of the system and enabled them to store multiple document certificates in one block.

Then there is another interesting advancement that is related to cryptocurrencies with the underlying principle of a system that is similar to blockchain technology.

W.Dai, a well-known computer engineer with his major work in cryptocurrencies and cryptography, mentioned the idea of decentralized money, b-money in 1998. It is a scheme where the users can stay anonymous using their digital pseudonyms and also do transactions with each while enforcing contracts without the need for any help from outside.

This thought-process can be found on his site B-Money, he started his train of thoughts by mentioning that there is no need for government or violence in a community where people are linked without knowing their true identity.

His theory clearly mentioned that such a system is possible where a community can operate without being confined by rules and regulations of a single entity. The participants can co-operate between themselves and hence can use the community to drive the exchange of money and enforce contracts.

He also cleverly mentioned two protocols where the first protocol was “everyone mountains there a database (separate).” The database will have a complete account of each pseudonym money, and hence everyone collectively knows the money ownership.

He theorized the need to solve computational problems where he mentioned is the creation of money.

Well, the idea of cryptocurrencies was not new, and there have always been theories for it.

In 2008, a person named Satoshi Nakamoto(pseudonym) released the bitcoin whitepaper, which built upon the idea shared by W.Dai to create bitcoin. Bitcoin is the cryptocurrency here. However, the technology used by bitcoin is blockchain technology.

However, there is conflicting information online where few resources mention the year of blockchain technology in 2009 and others as 2008. We choose Wikipedia as it is more reliable than other online sources.

So, if you are asked when was blockchain invented? The answer should be 2008 and not 2009.

There are still many people who believe that bitcoin and blockchain are the same things.

But, in reality, bitcoin used blockcahin technology as its underlying tech.

Then came 2017, where the bitcoin demand surged and reached new heights. This enabled blockchain technology to reach new people and masses.

One of the problems that it suffered from is the lack of speed to make transactions happen. The lack of scalability hampered bitcoin. But, now, bitcoin developers are already in the works to introduce a lightning network that improves the bitcoin transaction per second from 7 TPS to a respectable number.

VISA, on the other hand, offers 24000 transactions per second.

Bitcoin also suffers from transaction fees that can be quite taxing for the person who is doing the transaction.

However, the current scenario is changing fast as bitcoin is now testing out and deploying lighting networks.

The Neutrino is a privacy-focused client that is easy to use and privacy-focused. The Lightning Network Daemon, on the other hand, is going to handle other aspects of the network.

Ethereum was first released on 30th July 2015 by Vitalik Buterin and Gavin Wood. It introduced smart contracts that enabled developers to code conditions and requirements and create virtual contracts between two parties.

So, if you buy a house from a seller, you both can create a self-executable smart contract that will have all the underlying conditions, including loan payment, transfer of ownership, and so on. Once you make all the payment, the smart contract will execute itself and pass the ownership to you from the seller.

Distributed ledger technology is an umbrella term within which blockchain technology falls in.

Now, you will be able to find excellent DLT solutions, including Hyperledger, Quorum, and Corda. All of them have a different approach to solving the distributed ledger problem. We have covered all of them on 101Blcockahins.com, so check them out below.

When was cryptocurrency invented?

The idea of cryptocurrency is old and dates back to the 1900s.

The first real cryptocurrency implementation was done in 2008 when Satoshi Nakamoto released the bitcoin white paper.

However, David Chaum in 1983 released the idea of electronic money, known as Cash.

In 1998, Wei Dei released his idea of b-money. The idea is a cryptocurrency that will be distributed and offer an  electronic cash system with anonymity.

When was blockchain technology invented?

Satoshi Nakamoto first invented blockchain technology in 2008 through the release of bitcoin whitepaper.

When was blockchain first invented?

Blockchain and blockchain technology means the same thing. This blockchain was first invented in 2008.

The term, “cryptocurrency”was invented way back in the 1900s. In 2008, Satoshi Nakamoto did the actual implementation when he released the bitcoin white paper.

This leads us to the end of the article, where we discussed blockchain origins and history. Our focus was to find the motivation behind blockchain technology, its evolution path, and the people who are behind it.

So, what do you think about the article? Do you think we were able to cover it in-depth? Comment below and let us know.