Nuls blockchain aims at providing business entities with a platform for creating and deploying their decentralized applications to solve the problems that face them in real life.

Majority of blockchains have adopted smart contracts technology. However, most of them have issues with costs of deploying decentralized applications plus some of them do not fit very well in the business world. That is where Nuls came in and invented a way of reducing the burden on the main chain of its blockchain by introducing side chains to decouple the events and services on the blockchain.

Nuls, therefore, provides functional mechanisms of implementing smart contracts in the cross-chain consensus thus reducing the cost of generating and deploying decentralized applications and at the same time making it easy for the developers to customize the Dapps for different business applications.

Nuls (NULs) is a Singaporean based cryptocurrency that launched in September 2017.

Contrary to most cryptocurrencies, Nuls never had an Initial Coin Offering (ICO). Instead, the cryptocurrency airdropped 40 million NULS tokens into Binance Exchange platform later in November 2017 at a price of $1 per coin.

The project was mainly funded through the airdrop although there is a lot of funding from the community and the business partnerships.

The core team behind this extraordinary cryptocurrency constitutes of 11 members who were brought together by their share of philosophical ideology.

Almost half of the core team members are community leaders who help in bringing different decentralized application developers from across the world together towards a common goal.

What is Nuls Blockchain? Top Features:

However, since the Nuls cryptocurrency seeks to make the process of developing Dapps more customizable, neither of the previous consensus mechanism would work for its mechanism especially due to its modularization and multiple chain structure. As a result, the development team came up with a new consensus mechanism referred to as the Proo-of-Credit (PoC).

The Proof-of-Credit is a first of its kind consensus module that was developed by the Nuls development team to help solve the issue of linking the different customized side chains to the main chain through the customizable module layers.

PoC Vs PoS (Proof of Credit vs Proof of Stake)

PoC is in a way similar to the PoS since, during the verification process, some tokens have to be provably locked/stacked to allow a user to run any node. However, for the PoC, the exact number of tokens to be locked has not been specified, and the community can continue voting as the user accesses the nodes. When the user required to regain access to the tokens, they simply stop running the nodes and access their tokens.

The PoC consensus mechanism, however, differs with the PoS consensus mechanism when it comes to the process of incentivizing node operators for good behavior or punishing them for going against the rules. The PoC comes up with a credit score of every node based on the behavior of the node operator over a period. Also, when it comes to payouts, the more the tokens that a node stores/stakes, the more the payouts. However, the payout is affected by the credit score of the node.

Every decentralized application developed through the Nuls blockchain has to have three layers. These layers are the chain layer, the logic layer, and the module layer.

The smart contracts help in making it easy for DApp developers to design, develop and deploy the Dapps. By using smart contracts, anyone can develop Dapps on the Nuls blockchain. You don’t have to have an excellent command of any programming language to be able to write good code for your DApp. Everything is laid out in the smart contract, and a developer is only required to state the logistics of the DApp he/she wants.

With the multiple chains, decentralized application developers can create a DApp and attach it to the main chain. The multi chains help to ease the traffic on the main chain. The main chain only handles the vital information that is being passed to it from the side chain through the Proof-of-Credit consensus mechanism.

Nuls also has four built-in modules which help provide guidelines for Dapp developers. The four modules include the networking, consensus, storage and the algorithmic modules. The modules contain specifications for developing specific segments of a decentralized application which by default include networking, consensus, storage, and algorithm. The modules, therefore, go a long way in helping the developers in developing decentralized applications since they only have to choose what module to use. Also, the modules are customizable and replaceable in case the developer feels like not needing them.

With the introduction of customizable modules and the side chains, developers can be able to design and deploy decentralized applications that are specific to the needs at hand. 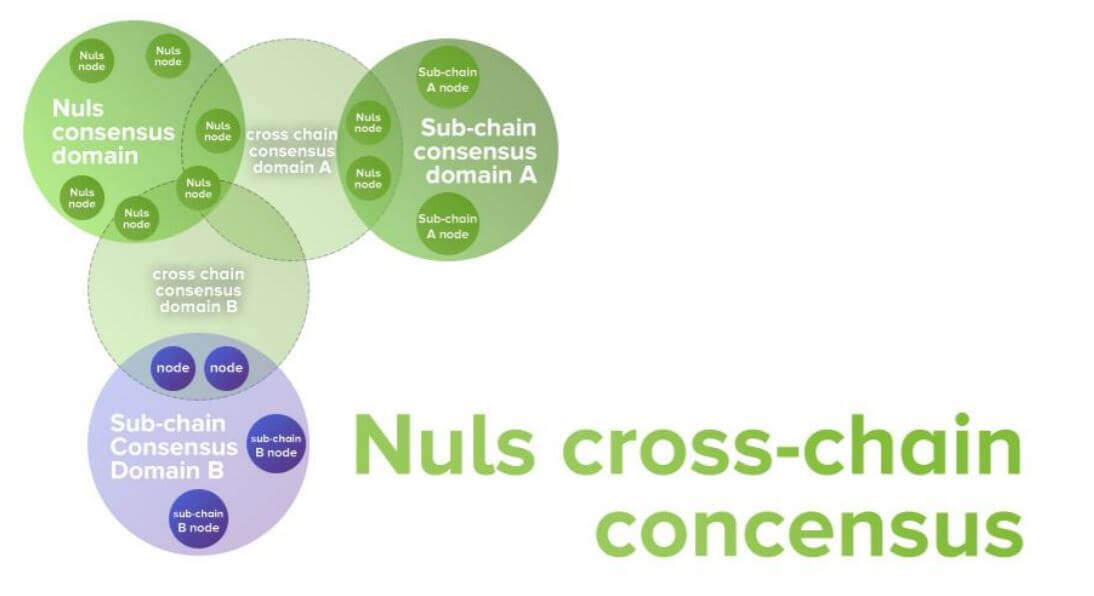 Therefore, in simple terms, in Nuls blockchain, developers develop decentralized applications to solve specific business problems facing the users. Then the users pay for the Dapps using the NULS token in the Nuls blockchain.

The Nuls cryptocurrency Roadmap is divided into three sections: ICE, WATER, and STEAM. The development team is currently focusing on the ICE part.

It is just as in the cycle of water. It starts with ICE form, then when the temperatures warm up, the ICE becomes WATER, and if the temperatures continue growing hooter, the water will eventually turn to STEAM. So, Nuls is currently at the ICE level.

The ICE level is scheduled to end in July 2018.

By March 2018, the team had accomplished the following:

Then by the end of May, Nuls accomplished the following:

By the end of July 2018, the team is scheduled to have accomplished the following:

The NULS WATER phase is yet to be assigned timelines. It only has the specific tasks that the team look forward to accomplishing. These tasks include:

The NULS STEAM phase is yet to be assigned timelines. It only has the specific tasks that the team look forward to accomplishing. These tasks include:

NULS vs NEO: why the big fuss!

There has been a lot of talks lately about NULS and NEO especially due to the similarity in names of the lead developers and founders. NEO founder and lead developer go by the name of Erik Zhang while NULS founder and lead developer are called Jason Zhang. People are convinced that there have to be something between the two; with the main question being whether the two are related. Again, the two cryptocurrencies are based out of China but within Asia.

However, despite the similarities and the rumors going around, the two blockchains are built or two different purposes although they seem to complement each other. The NULS blockchain provides a customizable platform for business entities to develop and deploy decentralized application while NEO digitizes assets using the smart contract technology to come up with smart economies.

Off-chain scaling refers to approaches that help increase the utility of a blockchain network without interfering with the main blockchain. These practices include:

The NULS blockchain uses the side chains together with its new proof-of-credit consensus mechanism.

Examples of such procedures include:

Which is more valued: NEO or NULS

However, it is arguable that NEO is older than NULS by approximately one year and hence the wide gap. However, this is debatable since there are some coins which are younger than NULS but doing better than NEO.

The best wallet that is compatible with NULS and NEO is the Ledger Nano S wallet.

NEO normally has two types of Tokens: the NEO and GAS tokens, and it is usually hard to find a wallet that accepts the two tokens. That is why apart from Ledger hardware wallet, the other portfolios compatible with NEO are specially designed for the NEO tokens.

Some of the best NEO wallets are:

To acquire NULS tokens, a person can go to some of the crypto exchange platforms which lists Nuls (NULS) and buy it.

Since you cannot purchase NULS directly using your credit card, you will need first to acquire another type of cryptocurrency, preferably Ethereum of Bitcoin and then go to one of the pure crypto exchange platforms which support the NULS to exchange the Etherum or Bitcoin for NULS tokens.

Some of the main crypto exchanges that support NULS include:

After purchasing NULS tokens, you will need to look for a portfolio that is compatible with NULS so that you can store your NULS tokens there.

Some of the wallets that are compatible with NULS include: