How Blockchain Job Market is Booming!

As recently as March 2010, the value of Bitcoin was even less than a penny. Fast forward ten years, the value of Bitcoin in 2020 rose to $20,000, and people who invested early were riding around in luxury cars. The craze surrounding Bitcoin will always have an intrinsic relationship with its price; universality drove the Blockchain job market into the spotlight.

Between 2017 and 2020, the demand for Blockchain rose by nearly 2000 percent, and it became one of the most highly-valued skills to have in the industry. By 2024, the net worth of the Blockchain market is expected to be around $20 billion. Today, 69% of banks are adopting Blockchain technology to add extra layers of security and to make their services hassle-free.

According to data collected from LinkedIn, Blockchain occupies the top spot in the list of skills that have high demand in 2020. The website created this ranking by considering those skills that are high demand in regard to the supply. The skillset of individuals who are getting hired most often is a clear proof of Blockchain’s growing demand.

The high ranking of Blockchain jobs is a clear indication of how much it has penetrated the world of business. Just a year before, Blockchain did not feature on the list of most in-demand skills. Blockchain is the most in-demand skill currently in Australia, Germany, France, and the United Kingdom. It is beating other popular technologies like artificial intelligence and cloud computing.

Blockchain was once hidden in the shadowy depths of the cryptocurrency realm. But it has now emerged as a viable business solution for several problems. Thus, recruiters don’t need to be with financial services to seek out new recruits for Blockchain jobs. 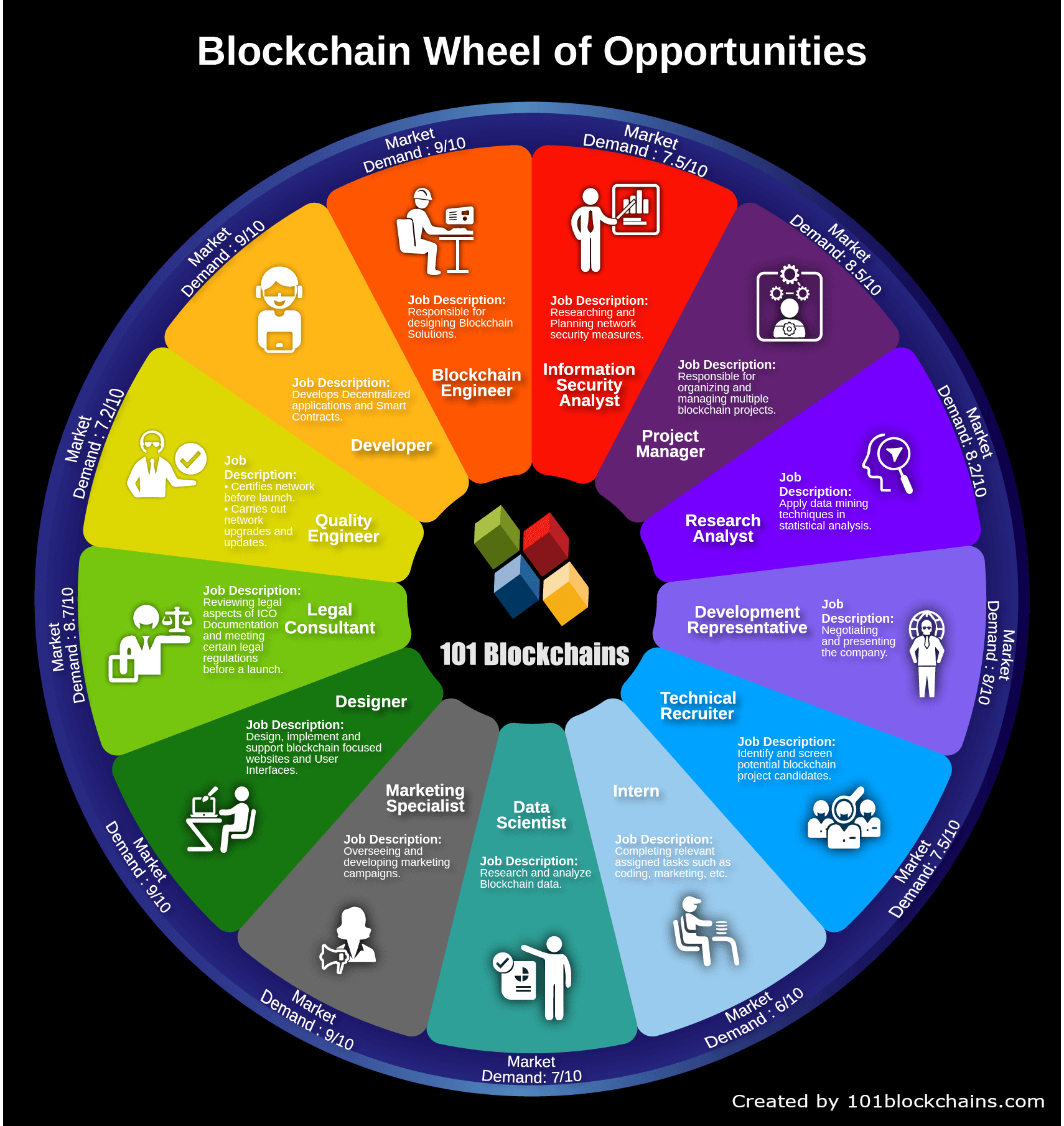 With the refocus on bringing products to market and profitability, the number of Blockchain sales, marketing, and design roles have increased. Cryptocurrency exchanges are the major employers in this sector. About 42% of employees in the Blockchain industry work for these exchanges, while 10% work for mining and hardware manufacturers.

All the big names in the corporate world like American Express, Amazon, Microsoft, JP Morgan Chase, Oracle, and IBM have adopted Blockchain as a line of business. The Blockchain job market now ranges across several industries, from healthcare to shipping, from gaming and entertainment to food safety and farming.

As per Linkedin Report, Blockchain is a top skills in 2020.

Many organizations are using Blockchain now to solve complicated issues, and this is also creating a big boom in the Blockchain job market. There is enough data that serves as evidence for the growing demand and high salaries for Blockchain programmers. In 2019, the number of jobs related to Blockchain rose by 300 percent with respect to 2018.

San Jose, San Francisco, and New York saw the most number of openings. This rise in demand for jobs in the Blockchain domain has also led to a growth in Blockchain job salary. According to Hired, the online jobs site, the average salary for a Blockchain developer lies somewhere between $150,000 and $175,000. This is significantly higher compared to what an average software engineer earns.

The Blockchain job salary range for Blockchain developers is not at part with those working with another in-demand technology, Artificial Intelligence. Blockchain is a rich combination of programming concepts and technologies, like ledger economics and object-oriented programming, with a solid base of cryptography. This means that there is a great demand for requirement specialists and product managers in the industry.

Also Read: How to become a Blockchain Engineer?

Since the supply for Blockchain developers is quite low, the demand is also quite high, and this is the reason behind the growth of the Blockchain job market. While the benefits of Blockchain are still under scrutiny, everyone knows about the technology these days due to extensive media coverage.

Several established organizations have adopted Blockchain and even taken initiatives exclusively related to this technology. Microsoft is one such organization that did this with Azure and introduced a Blockchain platform within it. IBM also has a dedicated Blockchain division that is based on Hyperledger. 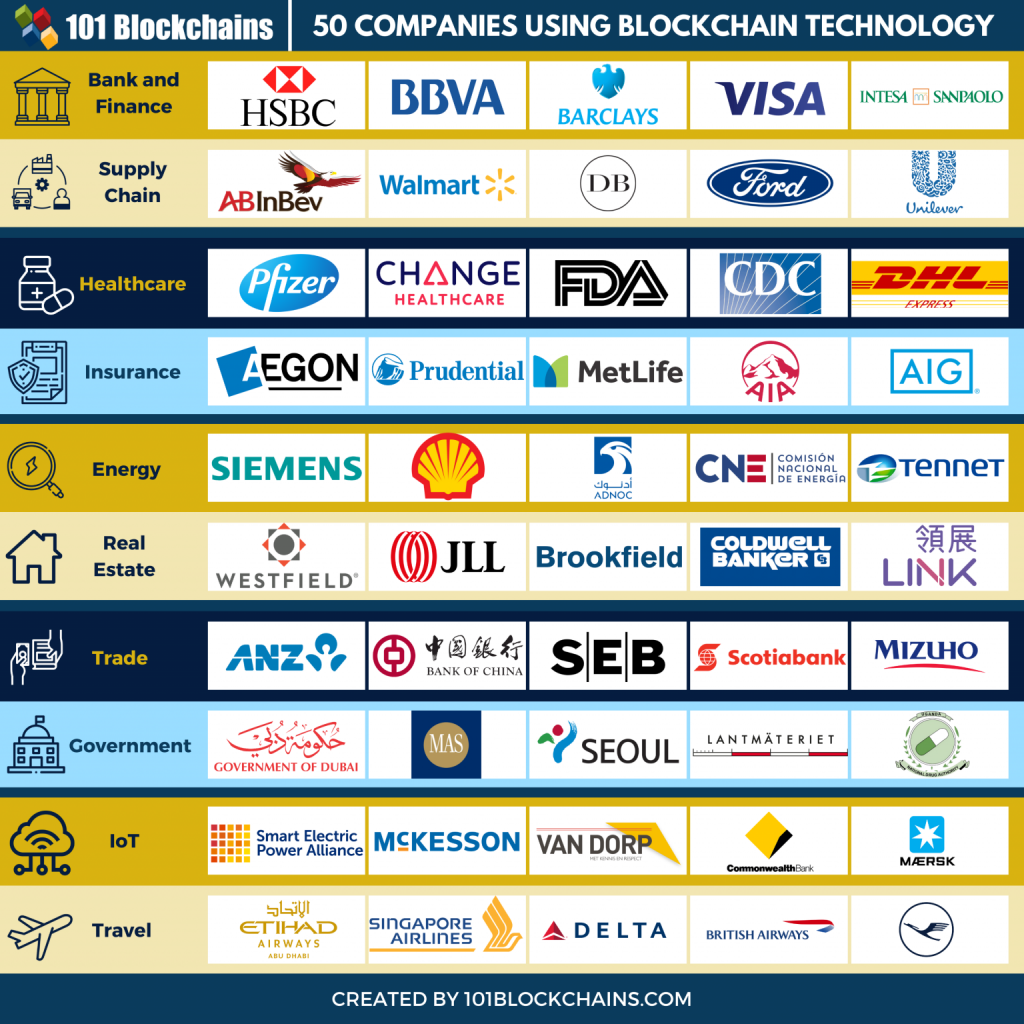 Social media giants Facebook has a dedicated team to determine how their business makes use of Blockchain. Companies are taking several measures to solve the supply problem for developers working in the Blockchain job market. These include bounty programs where developers are invited to identify bugs in the clients and protocols for which they get rewards.

Many organizations are holding boot camps to introduce this new technology to budding programmers. Universities are also entering the field and setting up online courses related to Blockchain.

Here, only a single organization has to write permissions, and based on usability; they can also restrict read permission. For B2B use cases, businesses can easily leverage Blockchain technology using a private Blockchain.

Organizations are looking to streamline their business processes in a cost-effective manner using SMEs. So we can expect the CAGR for the SME segment to be significantly higher between 2020 and 2025. Most SMEs have just begun experimenting with Blockchain. However, in the coming years, more and more companies will start adopting SMEs. This will influence the Blockchain job trends. This is because they offer transparency and low infrastructure costs,

In terms of application area, banking and financial services will grab the largest share in 2020. As such, companies have recently come to realize that they can secure customer transactions using Blockchain technology.

The Blockchain job market in this particular application area will see rapid growth internationally. This will be due to reduced cost of ownership, fast transactions, Initial Coin Offerings, and rising cryptocurrencies.

Governments and government agencies will keep a close eye on the Blockchain industry during 2020. Blockchain transactions are controllable and transparent. This can be crucial in the fight against corruption, money laundering, and cross-border crime. So in 2020, Blockchain job trends will include governments hiring experts in the domain.

Big businesses will keep up with their expansion of activities related to Blockchain. The finance and service sectors are already involved with Blockchain. Furthermore, in 2020, we will see the major logistics and transport companies following in their footsteps.

In 2020, the most effective and efficient startups in the Blockchain job market will be those that survived the crypto recession through crowdfunding. These companies will start offering valuable services and begin justifying their investments.

Having survived several hacks and attacks, the Blockchain industry will prove its effectiveness in 2020 and might even surpass the venture capital sector in this department.

Blockchain is the next big thing, and it has the potential to transform the entire world, and it will be interesting to see what it will bring in the future. Right now, the internet is full of wanted ads for Blockchain developers, and this trend will continue for years to come.

Are you aspiring to build your career with the most in-demand technology? You should start your Blockchain journey now with the Free Blockchain Course. Take the first step now to lay the foundation of a bright future!