Are you here to learn about the blockchain and quantum computing battle? If you do, then you have come to the right place.

We live in a world of extraordinary growth. From the internet to blockchain, we have seen unparalleled growth in the last three decades.

With the advent of computing, we now have the tools to do complex tasks in a matter of seconds – be it calculating the route of an airplane or predicting the weather.

In this topic, we are going to cover the blockchain and quantum computing, their relationships, how they impact each other and more! 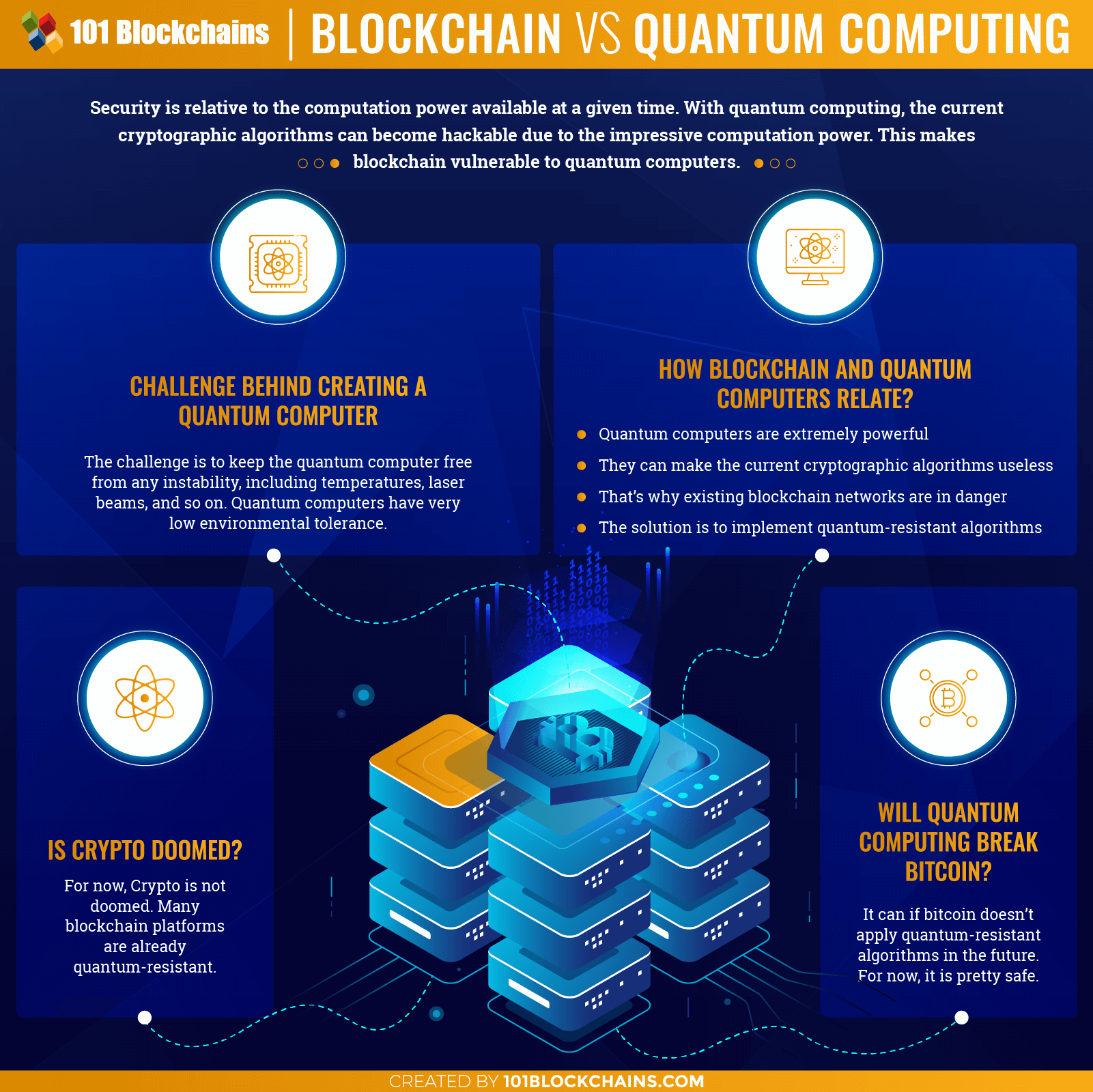 Getting Started: Understanding the base premise

The premise of the comparison starts with the core feature of blockchain, i.e., security. Blockchain is touted as one of the most secure networks out there. It is because of two reasons; mainly, one is its decentralized nature, and the other is the cryptographic algorithms used to secure the data for encryption and decryption purposes.

Quantum computers are way faster and can make contemporary blockchain-based systems struggle when it comes to keeping the data secure.

To get a better understanding, let us try to understand Quantum computing in-depth.

Understanding Quantum Computing and What it Brings to the Table

Quantum computing is based on physics. Physics, all over the world, have worked hard in the last three decades to make quantum computers a possibility.

In short, a quantum computer utilizes the principles of quantum mechanics. Currently, quantum computers are still at work, and we are on the cusp of it being a reality very soon. However, when it does, it can impact how we secure our systems, especially blockchain.

The journey of qubits started in 1998 when Oxford, MIT, IBM, and others were able to work with just two qubits. Right now, the limit has reached 72 qubits.

Even leading technology sites, including The Verge, shows great interest in how the world of computing is going to change. According to the media, there is still time before quantum computing can finally start working.

From where the computational power comes from?

Another interesting concept that defines quantum computing is entanglement. It happens when two particles are entangled together — the entanglement results in two particles remaining in the same state. If one changes, then the other can also change depending on the state of the other.

The distance between them does not matter, and each one of them will reflect upon the other particle’s state. That is what makes computer scientists excited about quantum computing. Right now, companies are working hard towards increasing the number of qubits.

The challenge behind creating a quantum computer

Quantum computers are fascinating but are equally hard to maintain. The state of superposition does yield performance, but are not stable. To make them stable and manage them correctly, physicists apply many methods including microwave or laser beams, maintain temperatures, or ensure that no type of interface interacts with the working environment.

With such low tolerance of the environment, quantum computers are tough to maintain. A slight difference in one of the elements can bring down the whole operation. The process through which the dissipation takes place is known as decoherence.

In simple terms, the more stable the qubits, the more computation power is generated. However, as we increase the number of qubits, the environment becomes more unstable and hard to maintain.

We started with just two qubits, and now we have reached 72 qubits, which is operated by Google.

The current technologies are interdependent on each other. Take artificial intelligence, for example — it plays a crucial role when it comes to IoT. Similarly, we can also say that quantum computing can have major impacts on the blockchain.

Blockchain is known for its security. According to Deloitte, more than 84% of businesses expect blockchain to offer better security when it comes to conventional IT systems. Blockchain’s unique features make it a great candidate for securing any business system. The key features that back its security feature include decentralization, ability to automate transactions with smart contracts, proper use of consensus, and the ability to do assets provenance.

However, the problems occur when it comes to the way security is implemented by blockchain networks. It does give immutable and transparency, but it is not full-proof.

When it comes to blockchain and quantum computing, we can find some blockchain-related weaknesses.

Blockchain works on the idea of connected nodes that can interact with each other to make critical decisions. The lack of a centralized entity opens up many possibilities. To ensure that blockchain remains secure, many protocols are implemented, including the consensus algorithm. These consensus algorithms make sure that the whole network is counterfeit-resistant.

However, that does not mean that blockchain is hackable. One of the most popular ways to hack a blockchain network is to take control of 51% of the nodes. By doing so, the hacker can confirm fake transactions across the network, do double-spending and steal a lot of information or crypto.

The current generation of blockchain networks is capable of defending the 51% attack most of the time but can fail when quantum computing comes in.

The other different types of attacks including the following

The current generation of the blockchain utilizes the one-way codes. This means that they are one-way mathematical functions.

So, for a conventional computer, it is easy to compute it one-way, but impossible to do it in reverse. This makes using these one-way mathematical functions so useful. In short, the current computers are capable of generating digital signatures for security purposes, but getting the key or reversing it is quite impossible.

To get into perspective, let us take the example of prime numbers. You can multiply prime numbers efficiently, but if you want to find the prime factors of two prime number products, then it would be difficult. This dual nature of mathematics makes it easy to generate digital signatures for blockchain and then can be used by users for authentication purposes.

For a hacker, this means reversing the equation — which is quite impossible with the current computers to do so. Also, these one-way functions are efficient to generate hash functions which can then be used to verify newly added blocks to a ledger. If the contents are modified by a hacker, the hash will not match, and the block information will be discarded by the network. The only way to hack in this case is to find the hash value with a block – -and it would require reversing the function.

To understand the complexity, let us take an example.

If a computer solves trillion keys a second, it will still take it to do 785 million computations to get to the solution. In time, it results in 14 billion years.

NEO, for example, uses quantum-proof algorithms. Their approach is to build for the future, and by choosing algorithms that can withstand the tremendous computational power of quantum computing when it arrives.

We live in an era of information where anything is possible. The concept of security is time-specific, and we go back in history, no one thought that the enigma code could be cracked. The scenario of blockchain post-quantum can change drastically in the future.

Now, let us move on to bitcoin. Bitcoin is the number one crypto out there. Its success determines market success, the sentiments around it, and the future of crypto. If bitcoin fails, then there could be a long-term impact on the whole market. However, will it?

For now, it is hard to say what will happen. However, if you take the latest Quantum computer, then bitcoin is sitting safely. There are still chances that things can go haywire in the future, and we should be prepared for it.

In the article written by Jack Matier, he explains how IBM’s new quantum computer is not going to impact blockchain but also reiterates that things can change in the future. He discusses IBM’s commercial quantum computer(a 20 qubit computer) and does some maths to prove that bitcoin is still safe.

According to him, a 20 qubit computer can reach 2^20 computations which are similar to the laptop commercials available now. Even traditional cloud compute services can do 2^40 compute service, almost double of the IBM’s commercial quantum computer.

Quantum computer can reach insanely high speed. Any computer with 2^80 compute can start to pose a threat. But the real threat begins when quantum computers reach 2^3000 compute. This is when it will be capable of running Shor’s algorithm, which can break the most popular ECDSA 256 encryption used by bitcoin.

The solution is to proactively develop encryption that can withstand brutal compute power exhibited by quantum computers.

Solutions that are Quantum Proof

Blockchain or distributed ledger solutions are already on the path to solve the issue. For example, BlockDAG protocol already claims that they are resistant to quantum computers. It uses the tangle protocol, which makes it quantum resistance.

Another example is the NEO blockchain.

Lastly, private networks can be the answer to Quantum computers raw power. As access to the blockchain is private, the owners can control who can get access to it. It also means that quantum computers cannot operate in the environment — as no public keys will be accessible.