Beginner's Guide: What is Zcash? - 101 Blockchains

Beginner’s Guide: What is Zcash?

In today’s article, we will learn about Zcash. We will answer questions such as “ What is Zcash ”

Until now, we have seen a wide acceptance of cryptocurrency. Today’s generation especially is positive about decentralized currency as it gives them the ability to transfer value without any interference of banks.

The first-generation cryptocurrency did introduce the decentralized based economy. But it didn’t solve the privacy issue. This is where Zcash comes in. Unlike Bitcoin, Zcash is not an open ledger. If you use Zcash, your transactions will be completely hidden from the other people who are using the blockchain.

Zcash is a cryptocurrency that offers anonymity and privacy. All the information transmitted between two parties using Zcash is encrypted and secure. It is similar to Monero that we discussed a few posts back.

To ensure anonymity, Zcash uses zk-SNARK. It is a special proof that ensures that the network is secure. It can also use proof of construction. By using these methods, the blockchain values keep hidden from the outer world.

The hard-limit of Zcash is similar to Bitcoin. This means there are only 21 million coins out there.

ZCash first appeared on October 28, 2016. On this date, the Bitcoin blockchain was forked into Zcash. Initially, it was just called Zerocoin protocol. Then, its name is changed to Zeocash system and finally to Zcash.

Zcash company runs the company behind ZCash. It is also known as Zerocoin Electric Coin Company. Also, the founder and CEO of Zcash is Zooko Wilcox. He has more than 20 years of experience in cryptocurrency and has used his expertise in cryptography to build Zcash that protects user’s identity.

How Does ZCash Work?

To understand Zcash in layman’s terms, we need to go through a simple example. For example, if you are trying to send some BTC to another person, you will have to send it to its public address.

Now, let’s try to learn how it can be done using Zcash. In Zcash, the sender can choose two ways to make the transactions. They can choose between shielded private transaction or a normal transparent transaction. This is different from other privacy coins such as Monero, where there is only one way to initiate transactions. 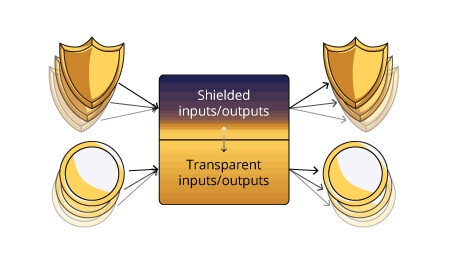 The choice gives the user the ability to make the most out of the blockchain. It gives the best of both worlds. Sometimes, it is important to have a transparent transaction. This can be done to protect the interest of both the sender and a receiver. For example, if you try to buy an item from a seller, you need to keep it transparent so that it can be referred too if any conflict arises.

Meanwhile, anyone can also choose shielded transactions and stay away from any prying eyes.

To ensure that it works as intended, Zcash uses zk-SNARKS. You can read about it more here.

As it is forked from Bitcoin, it also has the same supply of 21 million coins. At the current mining rate, it is estimated that all the coins will be mined by 2032. The mining difficulty is increased with each block mined. This means that every four years, the block mining reward is cut to half.

Zcash was never a part of a big project or intended to raise funds through ICOs. That’s why it is funded by closed investors. They invested $1 million to ensure its development path. All the investors received “Founder’s reward” which contained 10% of the total supply over a 4-year period. Some of the famous investors include Roger Ver, Barry Silbert, Naval Ravikant and others.

Zcash tries to solve the drawbacks of the first generation blockchain. It ensures both privacy and security. Also, it doesn’t impose privacy from the get-go. As a user, you can always choose to do a transparent transaction.

At the time of writing, Zcash is doing great in the market. One Zcash coin stands at $230. So, what do you think about Zcash? Comment below and let us know.